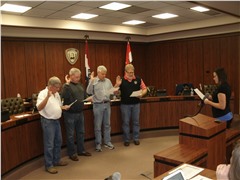 With the passage of the 1/2-cent Public Safety Sales Tax request on the April 3 ballot, the City is now taking the first steps toward building a new police station next to the old police and fire complex.

The first step was a unanimous vote by the Mayor and Board of Aldermen on April 16 to accept the certified election results. (This vote also led to four aldermen taking the oath of office later in the meeting. Four incumbents ran unopposed and were returned to their positions by voters: Phil Penzel, Ward 1; Dave Reiminger, Ward 2; Larry Cunningham, Ward 3; and Joe Bob Baker, Ward 4. Reiminger was named mayor pro tem — he will run meetings in the mayor’s absence).

The Board approved a motion notifying the public that the City of Jackson intends to utilize the design-build method for the police station. The vote was 7-0 as Penzel had removed himself from the Council Chamber.

The Board then approved the mayor’s appointment of Aldermen Katy Liley, Joe Bob Baker and Tom Kimbel to the Police Station Project Design/Build Selection Committee. (The vote was 7-0 with Penzel absent.)

The Board authorized City staff to apply for a rezoning request for the property on which the new police station will be built. The request is to change it from R-2 (single family residential) and C-2 (general commercial) to C-3 (central business). The C-3 zoning requires less setbacks.

In study session, the Board agreed to pay Koehler Engineering and Surveying $9,140 to survey the property, check for depth of rock, and do an environmental impact statement before construction begins.

• Public hearing on changing O-1 zoning: The Board set a public hearing for 6 p.m. Monday, May 21, regarding a request for amendments to the zoning codes that would remove certain residential uses (multifamily and condos) from the O-1 (professional office) zone.

• Fireworks: The Board approved a matching expenditure not to exceed $6,400 for the 2018 Independence Day fireworks celebration.

• Printer purchase: The Board authorized the purchase of a Hewlett-Packard wide-format multifunction color printer/scanner/copier for $7,595, the price bid by Rotolite of St. Louis.

• Excavator: The Board accepted the bid from Greg Abbott Equipment sales, Inc., of Jackson, for $61,405 to purchase a Yanmar compact excavator.

• North substation: The Board approved a change order of $9,300 (increase) to pay Midsouth Utility Consultants of Bartlett, TN, for its engineering services regarding the grading and site preparation for the north electric substation  near the Civic Center.

The Board then approved a $10,000 change order (decrease) to Clark & Sons Excavating. It was decided not to have Clark & Sons haul away excess rock from the site. The City may need that rock for fill in other projects.

• Movie filming: The Board authorized the use of outside loudspeakers at the Niclous Leist Memorial band Shell from 2 to 11 p.m. Sunday and Monday, June 10-11, for Spoon Pictures to film scenes of a movie at that site.

• Shawnee and Main Street: During study session, Dominic Thompson of Smith & Company Engineers told the Board it was recommended to install signal lights at Shawnee Boulevard and East Main Street instead of building a roundabout. A roundabout would be cheaper to build and maintain, but it would not improve the traffic situation as much as a traffic signal.

The growth in population Jackson is experiencing cannot be sustained without increased capacity to handle the wastewater, the City was told.

Construction projects that are needed to increase capacity will be funded by bond issues that can be issued as old bonds are paid off, so there would be no need for a tax increase.

The Board will schedule a public hearing in the future.

• Ramsey Branch Boulevard: The Board found it agreeable in study session for a brick sign for the subdivision to be installed in the right-of-way of Ramsey Branch Boulevard. An ordinance will be drawn up and an official vote taken at a future meeting. The ordinance will stipulate that although the sign is allowed on the right-of-way, it will not become the responsibility of the City to maintain.

• Recreational vehicles: In study session, the Board again discussed a ban on parking RVs on city streets. City Attorney Tom Ludwig read a proposed ordinance that allowed parking for 72 hours (to load and unload) no more often than once a week.

He said the ordinance tells the RV owner “he needs to find a place to park that vehicle somewhere other than a public street. He can park to load, unload, and charge up refrigerators.”

Alderman Joe Bob Baker said the proposed ordinance did not allow RV owners to park their RVs on dead-end streets where they live, which he thought should be allowed. Alderman Katy Liley agreed, provided the owner has consent of neighbors.

Alderman Larry Cunning-ham said 72 hours was “way too long” and suggested 48 hours, with the exclusion of dead-end streets, provided the owner has consent of neighbors and the vehicle does not impede traffic.

It will be awhile before the Board of Aldermen has a solution to RV parking that is satisfactory. “We’ve got a ways to go,” said Cunningham.