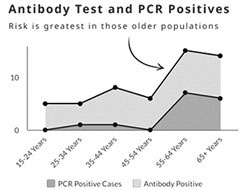 The Cape Girardeau County Public Health Center’s coronavirus antibody test has found that 99 percent of the county population is still vulnerable to the virus, but those 55 years old or older are more susceptible to getting the disease.

Of the 1,845 county residents who were tested as part of the study, 16 had the SARS-CoV-2 antibodies in their system that indicates they had previously been exposed to the COVID-19 virus. The study indicates that around 0.87 percent of the county’s population, or more than 500 people, could have tested positive.

The gender split for those that tested positive was 50/50, but all but two of the positive results were from residents 55 years old or older.

“The ratio of people that have had the disease in that 55 and older group is significantly higher than if you are young,” Russell said. Because of this, Russell said policies need to be developed to protect this vulnerable population – especially for those in congregate living situations.

He said that nursing homes and retirement centers should continue to be “exceedingly careful in their practices.” Russell said Cape Girardeau County should expect a COVID-19 outbreak in a congregate living location to happen at some point.

Due to the fact that less than 2 percent of the population does not have the coronavirus antibodies, Russell said herd immunity will not be a solution for the foreseeable future. “Herd immunity only occurs when serial prevalence for a disease reaches 60 percent or so,” he said. “We are not going to get there without a vaccine.”

Russell said the fact that three tested positive to both tests helps them believe the validity of the antibody test, but there are remaining questions as to why two of them tested negative for antibodies.

“What we are trying to figure out is if that was a false positive PCR [COVID-19 virus test], a false negative antibody test, or did they have the disease long enough ago that their antibodies are beginning to disappear,” Russell said.

He said the second round of testing, scheduled to take place eight weeks after the first test, should answer that question. The public health center will look at how many positives turn negative and how many positives remain positive to try to find out how long the antibodies stay in people’s system.

In addition, the second round of testing will help show how much the virus spreads over the next eight weeks.

“These test results are, in essence, a snapshot of time before we open,” Russell said.

He added that the first round of tests were taken right before the stay-at-home order was lifted, and the next round will be able to show what effect lifting the “maximum effort” restrictions meant to stop the spread of the virus.

Russell presented the preliminary findings to the Cape Girardeau County Commission on May 21. The Commission provided the health center $530,000 to fund the study. The findings will not be officially completed until the second round of tests are made.

Due to the nature of the study and the online survey, Russell said they expect there was a self-selection bias. ‘There were a lot of people who were sick in the first part of the year, and a lot of those people had it in their mind that they must have had COVID-19 back in January or February.”

Because it involves a blood draw, children under 15 years old were not included in the study. In addition, an additional bias reported is that those without Internet access in the county were unable to take the initial survey.

Over the four days the survey was open, 3,799 people responded – 58 percent of which (2,193 people) were then invited to participate. Russell said some of the respondees were not asked to have their blood drawn because the survey only tested county residents.

“We had a number of people who lived in other counties and worked in Cape County that responded. We did not include those,” Russell said. He added that they received some responses from Illinois residents.

The study was able to use randomization to match the study to gender, age and other demographic information of the county. “If we had more respondents in a particular age group than what we needed, we randomized from those people. There is a randomization of people by age bracket, and part of that was to reduce some of that selection bias.”

The only age group where not enough people responded to accurately match the demographic percentages was residents age 15 to 24. In contrast, residents age 34 to 44 were slightly over-represented.

Of the 2,200 people invited, 84 percent actually had their blood drawn. Russell said that is an incredible response rate for this type of study. “It shows how engaged the community is and how interested the public is in knowing about the situation.”

With the high response rate, the study was able to have a sampling percentage of 3 percent, one point higher than the minimum the center was hoping for. Russell said that with that level of sampling, the results should be representative for the entire county.