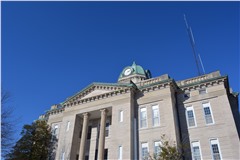 Cape Girardeau County is looking at about 8,000 to 10,000 absentee voters this November general election, according to County Clerk Kara Clark Summers.

She said the County saw an increase of more than 1,900 absentee voters during the August primary election. “We had five times the amount of mail-outs for the primary than we’ve ever seen historically,” Summers said.

Summers said she does not know how many of the November absentee voters will be “mail-outs” or in person, but that her office has already seen an increase in phone calls asking about absentee voting. “The phone [calls] have just been nonstop, and that’s really unheard of this early prior to the election,” she said.

Because of the expected high use of absentee voting this general election and the need for more space to socially distance voters and staff, the County Commission approved Summers’ request to rent space in the Osage Centre for absentee voting and the County’s central poll on election day.

The Osage Centre will be used instead of the County’s satellite office in Cape Girardeau. Summers specified that voters would also be able to vote absentee at the County’s Administrative Building in Jackson.

“We are not looking to reduce any polling locations,” Summers said. “We will have the same number that we’ve always had open.” Summers added that the use of the Osage Centre will be temporary and the Cape Girardeau satellite office will be used again in future elections.

Absentee voting begins Sept. 22 and will continue through Nov. 2. Because of the COVID-19 pandemic, being at-risk for the virus was added as a reason to vote absentee. Those who are not eligible to vote an absentee ballot may request a mail-in ballot that will need to be notarized.

The renting of the Osage Centre as a voting location cost $4,633.20. The County used CARES Act funding to cover the additional cost.

• A tax hearing was held on Aug. 27 before the commission approved the County’s property tax rates for the current tax year. The general revenue tax rate was set at $0.075, after being at $0.067 last year.

The County is expected to receive $1,074,157 for general revenue, based on the assessed valuation of county property totaling $1.4 billion.

The general revenue tax rate, which fluctuates each year, is found using a formula mandated by the state auditor’s office that calculates the eligible maximum property tax reduction based on sales tax collection in the county.

In addition, the Commission approved the first round of requests, totaling $45,444, from Cape Girardeau Area Magnet. Commissioner Paul Koeper said Magnet is collecting personal protective equipment reimbursement requests from businesses. He added that the Cape Girardeau Area Chamber of Commerce and the Jackson Area Chamber of Commerce were also working to collect the PPE requests.

The County received a grant from the Missouri Secretary of State’s local records program that will reimburse 50 percent of the cost. The County will receive the digital files produced and the state will keep a microfilm copy of the records in its collection.