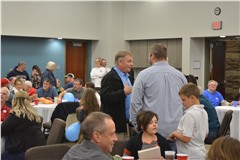 Election Day 2018 is over and TV viewers can finally find relief from those annoying political ads.

Missouri voters also approved the use of medical marijuana, eased restrictions on bingo, agreed to raise the minimum wage and refused to raise the gas tax.

There were two local contested races.

Republican Barry Hovis defeated Democrat Gayla Dace 15,264 (81.9 percent) to 3,373 (18.1 percent) to take over Donna Lichtenegger’s Dist. 146 seat in the Missouri House of Representatives. (Lichtenegger was term-limited out of office.)

“Tonight Missouri sent a loud and clear message in support of the values President Trump and I talked about in Cape Girardeau on Monday night,” said Smith, referring to the Nov. 5 rally at the Show Me Center. “They voted for continuing the economic successes of the last two years, for allowing farmers and workers to keep more of their pay, for limiting the size of government, and for protecting the right and liberties guaranteed to all Missourians by the United States Constitution.

“The past two years have been an incredible journey working with President Trump to change the culture in Washington and return the power to the people of Missouri, but our mission is just beginning.

“I want to thank southern Missouri for giving me the honor of continuing to fight for them in the United States Congress and representing the area where seven generations of my family have called home.

“I’m forever humbled that a farm kid from Salem, Missouri, can stand alongside our President to defend our conservative values and protect our rural way of life.”

Democrat State Auditor Nicole Galloway held onto her position, garnering 1,197,020 votes (50 percent). Her closest challenger in a field of five (plus one write-in candidate) was Republican Saundra McDowell, who received 1,060,066 votes (44.6 percent).

“We are thrilled that Republicans, Democrats, and independents came together to clean up Missouri politics,” said Nimrod “Rod” Chapel, Jr, president of the NAACP Missouri State Chapter and treasurer of Clean Missouri. “Thousands of Missourians from across the state came together to put Amendment 1 on the ballot, and then thousands more joined the fight to pass Amendment 1. It’s truly a great day for Missouri.”

• Eliminate all lobbyist gifts in the General Assembly worth more than $5;

• Require that legislative meetings and records be open to the public;

• Ensure that neither political party is given an unfair advantage when new maps are drawn after the next census, while keeping districts compact and contiguous, following city and county lines when possible, and strengthening protections for minority representation;

• Stop politicians from becoming lobbyists for two years after leaving the legislature.

Provisions will take effect upon official certification of the results. The redistricting reform, requiring more fair and competitive maps, will be in effect when state legislative maps are next drawn, after the 2020 census. U.S. law requires new maps to be drawn after each census.

Bingo operations will become easier with the passage of Constitutional Amendment 4 that eased some regulations on that game.