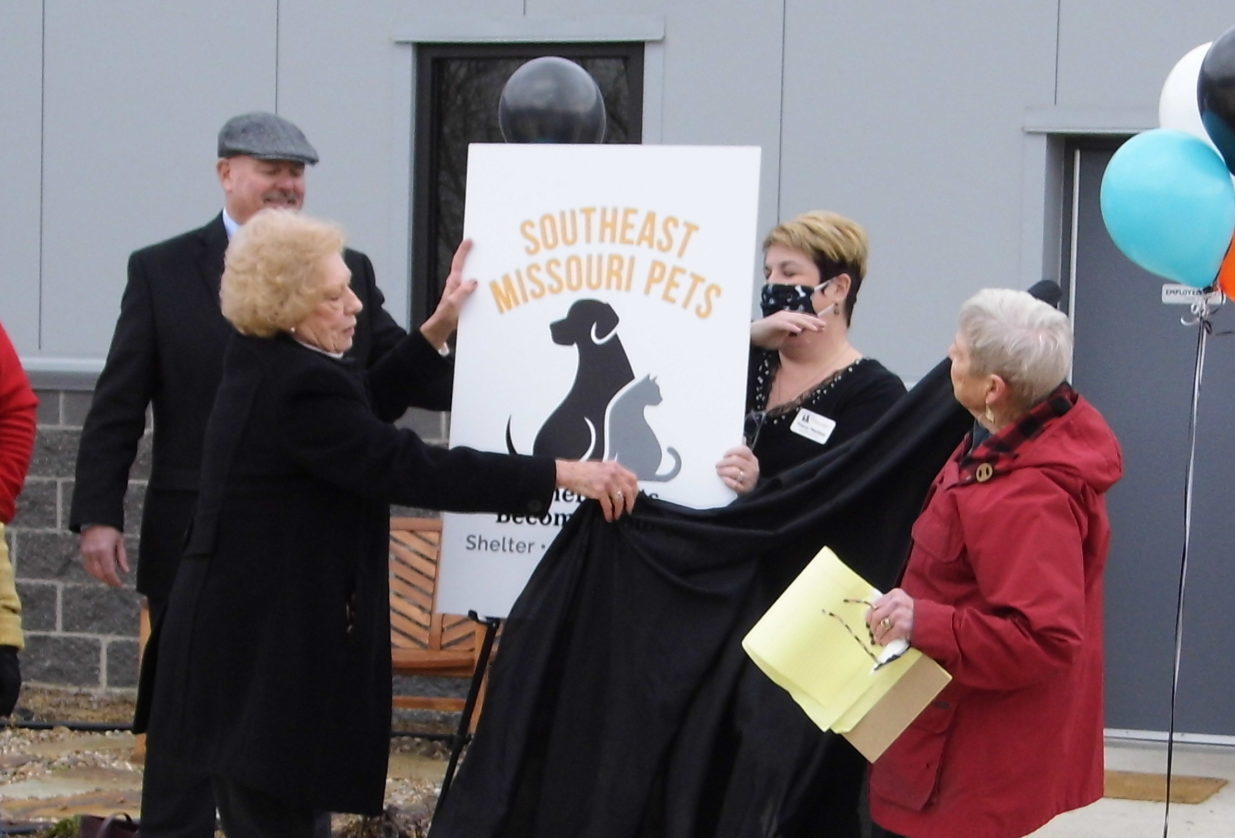 The new logo was unveiled by, from left, former Cape Mayor Jay Knudtson, Board Secretary Karen Honaas, Executive Director Tracy Poston and Charlotte Craig, president of the Board of Directors. Photo by Gregory Dullum

The Humane Society of Southeast Missouri is no more — at least it is no longer known by that name. A new name and new logo were unveiled last Thursday at a ribbon-cutting ceremony for its new pet adoption center.

“For 40 years we have been the Humane Society of Southeast Missouri. We are tired of trying to tell people we are not related to nor supported by the Humane Society of the United States. It’s a very common misconception,” explained Charlotte Craig, president of the Board of Directors. She helped unveil a new logo and name. The local humane society is now called Southeast Missouri Pets.

After unveiling the new name and logo, the focus was put on cutting the ribbon for the new $3.7 million adoption center which was built next door to the old facility.

Charlotte Craig thanked numerous people who were instrumental in helping make the new adoption center a reality, including former Cape Mayor Jay Knutdson, John M. Thompson, Narvol Randol and Phil Penzel. “Penzel Construction saved us over a million dollars from the estimate that we had,” Craig said. “We’ve raised almost $3 million, and as Narvol likes to say, if you’d like to give us the rest of it, we’ll name the building after you.”

Knudtson praised Craig, calling her a “rock star.” He said she was the reason he became involved in the project, and the reason the project was completed.

Knudtson said he has been involved in a lot of ribbon cuttings, but this one was personal to him. “This is one that I have seen a group of people come together, collaborate, and really do the unthinkable,” he said.

Knudtson said the dreams for the new building were lofty, and he was not sure they were attainable, but John Thompson brought his banking savvy and strategy to help the project succeed.

Thompson’s “aha moment” was when he got Phil Penzel involved, Knudtson continued. “When Johnny Thompson brought Phil Penzel in — the premier contractor in our region — he was able to bring in the design-build component, and bring a project that was even probably out of scope into scope. That made this a reality. John Thompson did that.”

Penzel “brought this into scope; he saved money. I’m sure that it cost him money,” Knudtson said. “He made this project happen functionally.”

Knudtson said he was part of a banking consortium that helped finance the project. “Remember, $2 million had been raised or pledged on a $4.5 million project. There was a shortfall there. Five banks came together in funding that shortfall,” he said.

Knudtson also recognized Phil and Susan Bailey, who donated $500,000 at a time when the money was really needed. Susan said the money was not really theirs; it was her brother’s money. He was developmentally disabled. He had worked 35 years at a minimum-wage job and saved the money by living with his parents until he passed away in 2019. He loved cats and dogs, and she and her husband decided thiswas a better use for the inheritance than to spend it.

The hallway with the dog kennels is named Boss Dog Alley, and a sign on the wall tells visitors it is in memory of Chuck Von Doersten-Susan and William Bailey.

As you walk in the door to the new adoption center, the first thing you see is a mock living room with a fireplace. A cat peers back through the glass wall. That cat is getting acclimated to living indoors.

Beyond the entry way is the lobby with a curved desk. The lobby sports a photo of Craig on the wall, stating that the lobby is dedicated to her for her years of service. The two restrooms double as safe rooms in case of storms.

The cat hallway opens to several “penthouses” like the one in the entry way. There is one designed like an outdoor patio called a “catio.” It gives cats a bit of fresh air. Landscaping attracts birds to keep the cats entertained.

When cats get stressed out, it “bottoms out their immune system and makes them very susceptible to disease,” Craig said. In the old building, the cats were kept next to the dogs and it was very stressful for the cats the first few days.

The dog side has 27 kennels that vary in size to accommodate different sizes of dogs. The size is set by the Department of Agriculture.

The old facility had 47 smaller kennels. They were allowed to be smaller because they were “grand-fathered in,” Craig explained. The old building will continue to be used to hold strays. By law, strays must be kept for five days, or 10 days if the owners are known. Using both facilities keeps the healthy dogs away from the strays.

A veterinarian joined the staff on Jan. 1. This will speed up the process of getting animals ready to be adopted. Once they are ready, the animals are moved to the new facility.

In the adoption center, each kennel is disinfected every day. Cleaning is much easier. Each kennel has its own floor drain for disposing waste. The old building had one drain in the middle of the floor.

When it comes time to play, there is a new outdoor play area with artificial turf that cost $48,000. This allows for year-round use, rain or shine, without the grass wearing thin and turning to mud. There are also drains under the turf, and it is disinfected every day.

The air in the new building runs through an $800,000 unit that exchanges air through an ultraviolet system six times an hour, making respiratory illnesses almost nonexistent among the animals.

The new heavy-duty washers and dryers for doing laundry cost $6,000 each. In the old building, the standard washing machines were replaced twice a year because they wore out.

There is a new commercial dishwasher. “One of our sources of infection over there [in the old building] was improper sanitation of dishes. We just couldn’t get them sterile. With this, we can,” Craig said.

The staff has locker facilities and showers, where they can clean up after work.

A community room can be used for summer camps, seminars, birthday parties, sleep-overs, etc. It will be used to raise additional funds for Southeast Missouri Pets.

The new facility is located at 180 Weston St., Cape Girardeau (next to the old building at 2536 Boutin Dr.).