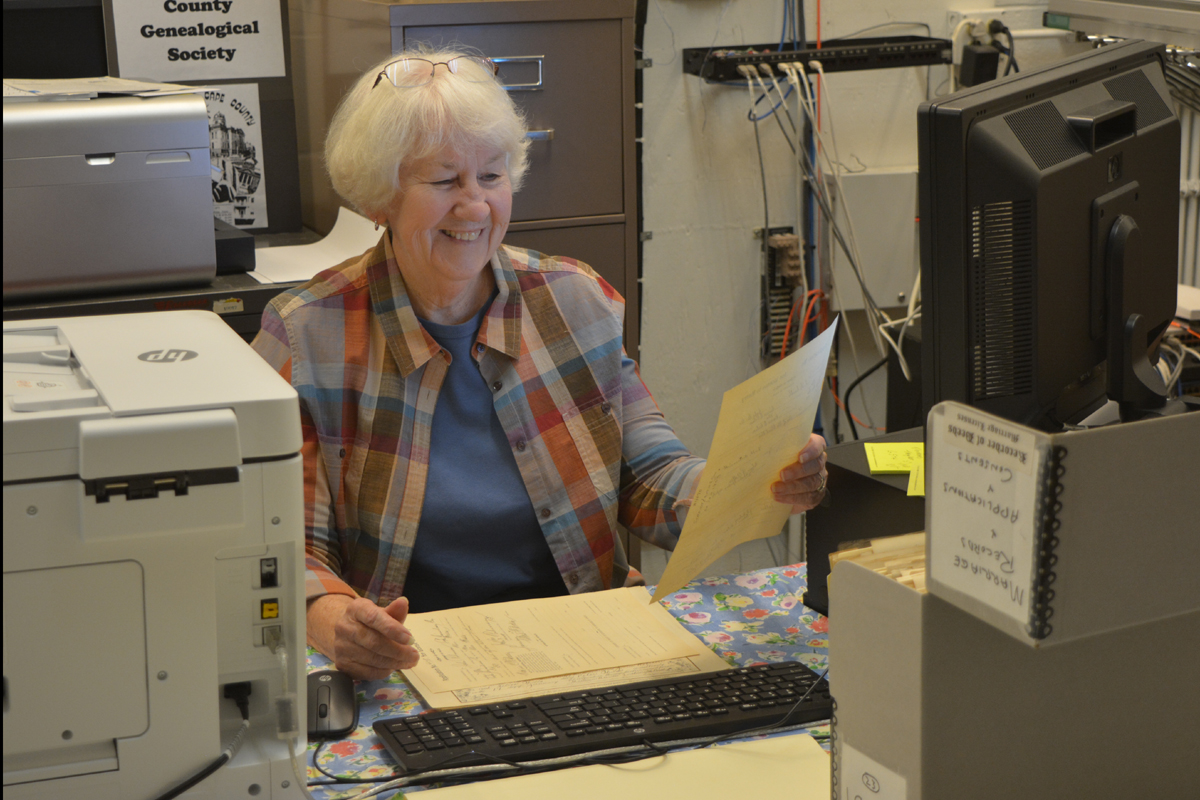 Janet Bockting has spent the past three-and-a-half years helping the Cape Girardeau County Recorder of Deeds Office by scanning around 100 years worth of marriage licenses to be digitized.

Bockting has scanned tens of thousands of marriage licenses over that time, starting with documents from around 1798 and recently getting to licenses from 1897.

The process of scanning the county’s marriage licenses is almost done, with Recorder Drew Blattner saying the process should be completed around Thanksgiving.

“I’m glad to see the end,” Bockting said while volunteering at the Cape Girardeau County Archive Center. “It’s been a good project, and I’ve enjoyed it.”

Unlike deeds, which were usually given back to the landowner after being recorded in a county book, the loose-leaf marriage licenses were kept by the Recorder’s Office.

“We’ve got every marriage record that ever basically occurred in the county, but what Janet’s done here with this loose leaf information allows people to actually get a lot more than what you get off of that page out of the book,” Blattner said.

In addition to Bockting, workers in the Recorder’s Office have digitized more recent marriage licenses from the 1940s to the 1980s. Blattner said the remaining marriage licenses will be digitized this month by ArcaSearch, who host the county’s historical research site.

He said the marriage license scans should be uploaded and indexed into the county’s online records database by next summer. Blattner said they have already transferred 20,000 of the loose-leaf marriage license into the system.

“Hopefully by this time next year, virtually all the Recorder’s records will be searchable online by anyone,” he said.

Bockting said she began volunteering with the county because of her passion for genealogy and local history. “This is where my family’s from,” she said. “They came here with the people that moved here in the early 1800s, so that’s why I’ve always been interested in Cape Girardeau County.”

Bockting has been coming to the Archive Center two days a week, working two hours each day, since she saw a news article about the county’s record digitization project in 2018.

“At the end of the article, it said they needed a volunteer for a couple things and the only criteria was that you know a little bit about computers,” Bockting said. “I thought that I knew a little bit, so I went over.”

“You have to keep all these numbers in your head,” Bockting said. “I’m all by myself, so I don’t get distracted, but I’ve found that I can only concentrate for about two hours. Otherwise, I lose my train of thought and then I have to go back.”

Bockting said the records changed throughout the years, with the earliest marriages being recorded alongside land deed records.

She said the records grew with the history of the county. “I used to be able to go through a box in one week because there wasn’t that many, but there were more once you got into the 1820s and the 1830s when more people started moving in here,” Bockting said.

In addition to the amount of marriages changing over time, the price to get a marriage license went from half a cent in the late 1700s to a dollar at the end of the 1800s.

Bockting added that she was surprised when going through the earlier marriage licenses to find there weren’t many marriages in the summer months like June or July due to it being harvest time.

Bockting said you could also track historical events through the marriage licenses, including the Civil War. “When you got up close to the war or during the Civil War, you didn’t have many marriages,” Bockting said. “But then afterwards, you see a rise in marriages including black families that wanted to be married and would come to the recorder. They wanted to be married, and they would list their children – I thought that was neat.”

Bockting said many of the marriage licenses have supplementary material that she also scanned, such as the marriage application for marriages starting in 1881, a guardian consent note or a letter stating the married couple was not related.

“There were all kinds of stuff,” Bockting said. “One had a note where the family had said it was okay for these two to get married, but then somebody came along and wrote a letter that said, ‘No, this man is no good, and they should not get married.’”

Bockting said she knows how much having these records indexed and digitized will help researchers – both in preserving the documents and making them accessible to those who don’t live nearby.

“If you are in genealogy and you go into a county looking for the marriage records of your great-great-great-grandparents or someone, it’s so wonderful if you can search for their name online so you don’t have to travel across the country to get those kinds of records,” Bockting said.

Bockting is also active in volunteering at her church, La Croix United Methodist Church, and as the chairman of the Wreaths Across America in Jackson for the John Guild Chapter DAR.

This is the first year Wreaths Across America was brought locally, and Bockting said they have made their goal to put the wreaths in the Jackson City Cemetery and Russell Heights Cemetery (read more on page 3). “I just thought that was a wonderful idea to bring to Jackson, so I volunteered,” she said.

Blattner thanked Bockting for all her work with the marriage records and commended her for her dedication. “She is a very special lady to have this much passion and to dedicate this much time and effort for all these years.”