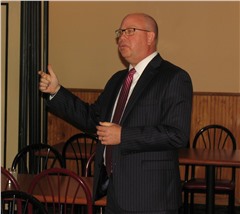 Of all his duties, Lipke told the Republican Women’s Club at Delmonico’s on Friday, “What I really like is treatment court.”

He first took an interest in [drug and alcohol] treatment court when he was a state representative. As chairman of the Crime Prevention Committee, he focused on recidivism and how to prevent criminals from returning to a life of crime. Treatment court is one way.

Treatment court also offers a financial benefit to taxpayers. While it costs about $10,000 to send a criminal through treatment court (a big part of the cost is drug testing), that is a lot less than the $25,000 to $35,000 a year taxpayers shell out to keep a criminal in prison.

Treatment court is the only alternative to prison. Some may think that it’s the easy way out for criminals. Lipke set the record straight. “We do not baby those folks that are in the program,” he said.

Only about 60 percent of the people who enter the program graduate, which speaks to how difficult it is.

There are five different treatment courts.

DWI court treats people who have three or more DWI convictions (making it a felony charge).

There are also two family criminal treatment courts where  the children have been taken into care; in one there are felony criminal charges and in the other there are not.

The most DWIs that one person has had in Lipke’s court is eight. “You may wonder why would we take someone in and not send them directly to prison?” Lipke asked. “Well, guess what? That’s what happened the first seven times. When they got out, they did it again.”

Treatment court provides better results. “Of the people who go through the program and graduate, 75 percent are never in handcuffs again,” Lipke stated.

When criminals enter treatment court, Lipke has a heart-to-heart talk with them. He gives them two big rules: “Don’t lie to me, and communicate. If you do those two things, we can help you. We expect you to screw up. You’re going to screw up. We’ll show you grace sometimes. Sometimes we won’t. We’ll do whatever is in the best interest of you to get you back where you need to be.”

The program has four phases.

Phase 1 is “really heavy with treatment,” Lipke said. “When they come in, that’s what they need. We have to give them treatment and keep them clean.”

During Phase 1, which can last four to six months, they go through 20-40 hours a week as an outpatient in a treatment center, or in some cases, they may live there as a resident 24/7.

These people generally have no job, no driver’s license and no place to stay. They have burned all their bridges with family members. “The only people who are there for them are users,” Lipke said.

Treatment court strives to help them stay clean, get a job, budget, a place to live, etc.

In addition to attending treatment centers, they come to court every Friday morning.

During Phase 2, the treatment is scaled back. They attend AA or NA meetings twice a week and meet with a sponsor twice a month. It’s important that they have people in their lives telling them not to go back to drugs or alcohol. They see Lipke in court twice a month.

During Phase 3, which can last a year to a year and a half, they must appear before Lipke once a month.
By the time they graduate, they appeared in court 76 times, had 40 individual counseling sessions, 200 group counseling sessions, 120 visits from their probation officer, taken more than 200 urine analysis tests and attended more than 160 AA or NA meetings.

“Treatment court is not for everybody. It’s a lot of work,” Lipke said. (And violent criminals are not even allowed in the program.)

But treatment court has a higher success rate, lower recidivism, and graduates have a better life with the opportunity to get back with their children.

Lipke gets satisfaction from seeing lives be put back together.