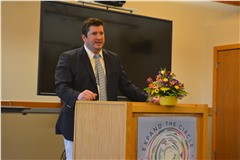 Parson announced the hiring of Limbaugh on Friday. The announcement came one week after Parson replaced  Eric Greitens as governor. Greitens had resigned amidst scandal. Limbaugh will replace General Counsel Lucinda Luetkemeyer, who resigned the same day as Greitens.

Limbaugh has not yet resigned from his current position. “I won’t resign for another week — maybe less,” Limbaugh said. There are certain logistical matters that must be taken care of first. One of those is moving. “I have to move up to Jeff City,” he said.

Limbaugh has some mixed emotions. He is excited about the opportunity but saddened to leave the people he has worked with in Cape County.

“I’m anxious to get up there. I’m looking forward to it. I’ll still be a public servant, but on a grander scale. That’s what I’m in it for.”

On the other hand, he added, “I’m leaving a truly terrific office. It’s hard to step away form it. I want to thank each and every citizen in this county for giving me this opportunity [as prosecutor] for five and a half years.”

Gov. Parson called Limbaugh personally and asked him to join his team. After talking it over with is family, Limbaugh accepted the position. “After consideration, I decided it was a tremendous opportunity and a way to help our governor.”

As general council to the governor, Limbaugh will “personally advise the governor on any and all legal matters that come to his office or to him,” Limbaugh explained. He will be assisted by two deputy counsels.

“Limbaugh brings proven legal experience to our office,” said Parson in a statement. “Not only does he have a wealth of courtroom experience, but his legal work on governmental affairs for the Cape Girardeau County Commission and his state legislature work with the Missouri Association of Prosecuting Attorneys is the kind of experience that will benefit our office.”

Limbaugh has served as Cape County’s prosecuting attorney since 2012, when he was appointed by Gov. Jay Nixon to fill the unexpired term of Morley Swingle. Limbaugh ran unopposed for re-election in  2014.

During his five and a half years as prosecuting attorney, Limbaugh has overseen more than 2,000 felony and misdemeanor cases per year, and has personally tried more than 20 jury trials, involving cases of murder, possession and distribution of controlled substances, and other cases.

Limbaugh was running unopposed for re-election this fall, but he appeared before Judge Ben Lewis on Friday to have his name removed from the ballot by court order.

The court also ordered filing for the office of prosecuting attorney to be open all this week, from 8 a.m. Monday, June 11, to 5 p.m. Friday, June 15, at the County Clerk’s Office in the Administrative Building, 1 Barton Square, Jackson.

Attorney Mike Welker of the Limbaugh Law Firm in Cape Girardeau has announced his candidacy for prosecuting attorney.