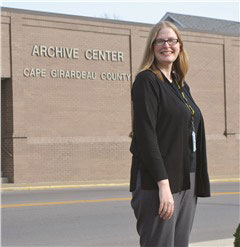 The Cape Girardeau County Archive Center has a new director who plans on using her experience as a journalist to help others do their own research.

Former Southeast Missourian reporter Marybeth Niederkorn, who has been in the role since Nov. 5, said she hopes to bring more attention to what the archive center has to offer.

“I really love that I have the opportunity to not only be the person whose in charge of making sure this all stays as it is, but also bring it out into the general public and let people know what we have,” Niederkorn said.

The archive center holds historical documents from all the county offices – including tax records, divorce records and probate records. The center also has documents from the Cape Girardeau County Genealogical Society and the Jackson Heritage Association.

Niederkorn said it was a huge honor to be chosen as the archive center’s new director, saying, “The people who have been director before have done tremendous work.”

She first contacted the County about the empty position in March after former director Steve Pledger passed away. “I asked about doing a story on the process of choosing a new director,” Niederkorn said. At the time, the County had not yet started the process.

“Later on, I reached out again because it had been a while and said, ‘I have changed my mind about doing an article because I would like to apply for the position myself,’” Niederkorn said. “That just happened to be the day before it was going to run in the Southeast Missourian. It was so weird how that timing worked out.”

Niederkorn said her time in journalism, as well as her undergraduate degree in philosophy and her master’s degree in professional writing has culminated in a love of research and the history of the region.

“You know how you look back at your life and the things don’t really make sense until you look at them through a particular lens?” she asked, adding, “Pretty much all I did is research all the time.”

She said that over the past few years, she became interested in the early history of the region and how groups of people settled here. She also was able to meet and talk to several local historians and historic organizations over her years as a journalist.

“I wrote so many stories that touch on every part of what’s going on here,” Niederkorn said. “It’s funny, too, that I gravitated toward the people who were involved in historic preservation.”

Niederkorn said one of the things she wants to bring to the position is growing the existing relationships with other organizations and facilities that focus on the history and preservation of Cape Girardeau County. She added that she hopes to bring in more educational groups once it is safe to do so.

“I’m not sure research skills are emphasized in education,” she said. “I think if we are able to bring people in and give them a little bit of guidance and background in how to research, it could be very helpful.”

A new Facebook page has been created to further promote the archive center and share updates on the center. Niederkorn said the page doesn’t have many posts yet, but the response so far has been better than she expected. “Within the first week we had about 50 likes,” she said. Niederkorn added that she hopes to add an Instagram account for the center in the future.

Another priority for Niederkorn will be to work toward grant writing to help ensure the documents at the center are properly preserved. “The first thing we have to do is get more shelving in because there are places where we have boxes stacked two or three high, and that’s not ideal,” she said, adding that funding the digitization of documents would also be a future goal.

Niederkorn, who has also written a book of poetry called Times Knew Roamin’, said writing is on the back burner for the moment. “This needs to be my primary focus for the time being, but I can’t stop myself from writing,” she said. “I’ve tried to give it up before, and it did not go well.”

She added that she has felt at home at the archive center, saying that being around books has always been where she is most comfortable. “I walk in here in the morning, and it smells like paper – it smells like history,” Niederkorn said.