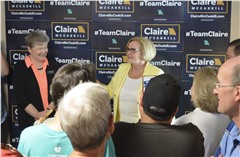 U.S. Senator Claire Mc-Caskill participated in a canvass kickoff event on Saturday at her coordinated field office in Cape Girardeau. The Democratic senator is up for re-election and will likely face Missouri Attorney General Josh Hawley (R) this November.

McCaskill told around 50 supporters and volunteers that she decided her campaign would be more people-to-people focused after she found the response to her town halls to be different than past years. The senator said that instead of the “vitriol” she faced in 2010 around the passing of the Affordable Care Act, there were more people who showed up that hadn’t already made their mind.

“What I think is going to move the needle is people going out — knocking on doors, talking to their neighbors, talking to their friends,” McCaskill said. She added that TV ads are still important, but don’t make as big an impact as hearing from people in their communities.

Cape Girardeau has been one of the most successful of McCaskill’s 21 campaign offices, having the record of number of doors knocked on in June. Cape Girardeau volunteers are responsible for knocking on 15,000 of the 400,000 doors canvassed for McCaskill’s campaign in June.

“I’d like to see us get to two million doors between now and November,” McCaskill said. “That would be shattering every record that has ever been made in this state. We are already 350 percent ahead where we were in 2016 and 2012.”

The senator said she was optimistic for her chances of reelection, saying “I’ve never been ahead in June before. I’m used to being two or three points in the hole and having to crawl out.”

McCaskill has raised over 18 million dollars, the majority of which has come from small donations. She said the average donation to her campaign has been under $70.

Before taking questions, McCaskill thanked those who have helped the campaign so far and said this election feels urgent and more emotional than most midterm elections, at least for Democrats.

One of the reasons for the urgency was the recent announcement of U.S. Supreme Court Justice Anthony Kennedy’s retirement. McCaskill, who pointed out that she voted “no” on the president’s appointment of Justice Neil Gorsuch, said there isn’t much the minority party can do.

The senator also answered questions about healthcare, saying she is “the only candidate running that will go to the mat to make sure you can still buy insurance if you’ve been sick before.” McCaskill said.

Hawley, as attorney general, is currently taking part in a lawsuit challenging the Affordable Care Act. McCaskill said that has put millions of Missourians with pre-existing conditions at risk of losing coverage.

McCaskill added that Hawley says he supports protections for preexisting conditions, but “it matters what you do more than what you say.”

She also spoke about her position as a self-described “moderate” Democrat.

McCaskill said Missouri, which has both a Democrat and Republican senator, is a state where there is a lot of swing voters who vote for Jason Kander and Donald Trump in the same election.

The senator said she can’t win without the enthusiasm from the left, but it will be moderates who decide this election. McCaskill said being able to work Republicans has allowed her to get some great things done, even if she had to compromise.

McCaskill said she was part of the team that was putting together an immigration bill that would have given a path to citizenship for DACA recipients while also increasing boarder funding. She said that bill went off the table when the president said he would veto it.

McCaskill also brought up a bipartisan pilot program that will bring federal funding to certified mental health facilities in Missouri.