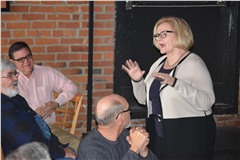 Claire McCaskill made one final stop in Cape Girardeau before the midterm election on Oct. 30 at Port Cape Girardeau Restaurant and Lounge. The U.S. Senator who was up for re-election on Nov. 6 thanked supporters and said she felt good about the election seven days out.

“Our crowds where we stopped are twice the size I’ve ever seen in other campaigns,” McCaskill said. “I remember stopping in Cape at the end of a couple other campaigns, and let’s just put it this way — there weren’t as many people.”

McCaskill added that it wasn’t too late to start volunteering and, despite feeling good, the election was far from over and it would be a close race. She asked those in attendance to speak to people they know who may not vote and convince them that this election is more important than a typical midterm.

The Democrat senator spent the final week of her campaign making many stops across Missouri, meeting with supporters from 7 a.m. to 8 p.m. daily.

“This is my favorite part of the campaign because I get to hug a lot of strangers,” McCaskill said, “I’ll admit that I’m a little tired of the bus, but it’s worth it because I get to see a lot of people the state that I love very much.”

McCaskill spoke about how healthcare is the most important topic during this election. She said health-related issues were brought up time and time again during her many town halls across Missouri, and that there’s a stark difference on this issue between her and her Republican challenger Josh Hawley.

When it comes to Hawley, McCaskill repeated a phrase from her grandmother — “Watch his feet, not his mouth.” Hawley has said he supports protections of preexisting conditions, but has signed on to a lawsuit that could overturn the Affordable Care Act.

“Healthcare is on the ballot, and so is Medicare and Social Security,” McCaskill said. “In Josh Hawley’s lawsuit, it will cut funding for Medicare Prescription D programs because we increased that funding in the ACA.”

McCaskill also brought up an advertisement by Haw-ley’s campaign where she says she could give up a few votes in the Bootheel if she received enough votes in St. Louis County. McCaskill argued that the video cuts her off and she followed that statement by saying that she was “going to work hard for every single vote.”

“I’ve been to the Bootheel three times as often as Josh Hawley,” McCaskill said. “So if we are going to add up hard work and commitment to a community and that’s the basis we are going to make this decision, well then it shouldn’t even be close in the Bootheel.

Peter Kinder, former Lieutenant Governor of Missouri, spoke against McCaskill outside the event before she arrived. Kinder said that the senator has “extremist” views that do not align with voters in southeast Missouri. He particularly called out McCaskill’s views on abortion, which differs greatly with Hawley.

When asked about her views on abortion, McCaskill said she has supported access to birth control, which has reduced the abortion rate and the number of teenage pregnancies.

“I think that’s where we need to focus our energy on; not criminalizing women and doctors, particularly those who have been impregnated as a result of a rape,” McCaskill said.

Read our coverage of the election results in next week’s issue or online at thecash-book.com.