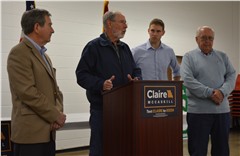 On Oct. 25, Missouri Democrat Party Chair Steph-en Webber launched a statewide Claire Fights for Vets Tour in Cape Girardeau. Webber, who is a Marine Corps veteran himself, spoke at Laborers’ Local 110 along with area veterans about how Democrat Senator Claire McCaskill has helped veterans in Missouri.

Webber first met McCaskill in 2007 during her veterans listening tour, which took place a few weeks after one of his two tours in Iraq. “I thought that was pretty amazing that a United States senator would take the time to listen to a 23 year old who didn’t have any sort of political clout or anything to offer, except for a story about what it was like in Fallujah.”

Webber spoke about he has watched McCaskill fight for veterans and work across the aisle to pass legislation that helps veterans. McCaskill, the daughter of a World War II veteran, worked for two years on behalf of a Missouri veteran to pass the Arla Harrell Act into law. The act delivered relief to veterans intentionally exposed to mustard gas during World War II.

Over her years as a senator, McCaskill helped pass into law reforms to ensure the VA is more responsive to the needs of veterans, championed the Forever G.I. Bill to improve veterans’ education benefits and enhance the post-9/11 G.I. Bill, helped pass a significant increase in mileage reimbursement to pay travel expenses for rural veterans receiving treatment at VA facilities and supported an expansion of critical caregiver benefits from just post-9/11 veterans to all veterans.

Ensuring Missouri veterans have access to the quality care they deserve has been a hallmark of Claire’s work, according to Webber and the other veterans.

Navy Veteran Thomas M. Meyer said McCaskill’s help has been very valuable for Vietnam veterans like himself who have questions concerning their healthcare.

“Claire has always been a go-to person and she would take the time, visit you one-on-one and listen to you,” Meyer said. “A lot of politicians wouldn’t — they would come up, smile, shake hands and move on.”

Meyer said there have been friends of his that he has directed to McCaskill. “They came back to say that without her they wouldn’t have had the direction that they needed or the contact that they needed to wade through a lot of the paperwork that was being demanded of them.”

J.C Kuessner, an Army veteran and former Assistant Minority Floor Leader in the Missouri House of Representatives, agreed with Meyer and said he had a friend who had spent six years trying to get benefits for his various medical issues from the Department of Veterans Affairs.

Kuessner said a few months after contacting McCaskill’s office, his friend got a new hearing and received VA benefits. “He’s turned his life around and there’s only one reason that it happened — U.S. Senator Claire McCaskill.”

Air Force Veteran Walter B. Wildman said he has split his ticket between Republicans and Democrats in the past, but fully supports McCaskill because of her work for veterans. “It’s the ongoing history of her support and work for veterans that made my choice to support her quite easy.”

Wildman said Southeast Missouri is not known for voting for Democrat candidates, but he hopes McCaskill will receive the majority of support from this area. McCaskill is up for re-election in the Nov. 6 midterm election, against Missouri Attorney General Josh Hawley.

McCaskill visited Cape Girardeau on Oct. 30, exactly one week before election day, at Port Cape as part of her “Fighting for You” tour. Read coverage from that event in next week’s paper.