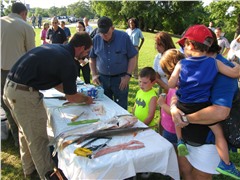 More than a hundred people gathered at the Cape Girardeau Conservation Center Aug. 8 to commemorate the 80th anniversary of the Missouri Department of Conservation (MDC).

Festivities began at 5:30 p.m. as visitors watched Conservation employees fillet and fry fresh fish. Once removed from the fryer, samples of the long-nose and short-nose gar and Asian carp were distributed to all who wanted a taste.
Inside the building, the first 80 attendees received gift items from the Conservation Department.

(Jones told the CBJ that Huckstep was instrumental in bringing the Conservation Office to the County Park; Jones and State Rep. Marvin Proffer worked for about 10 years to make the nature center a reality.)

Brenda Newbern, executive director of the Cape Girardeau Convention and Visitor’s Bureau, said more than 50,000 people visited the Cape Nature Center last year. In addition, ‘They ate in our restaurants and stayed in our hotels,” she said.

Department of Conservation Director Sara Parker Pauley gave a history of the Conservation Department and its strong connections to the citizens of Missouri. It was formed in 1937 when citizens wanted it formed.

It was funded for its first 40 years by fees collected from hunting, fishing and trapping permits. Then a 1/8 of one percent sales tax was passed to help fund the Department.

Pauley said the Southeast Region has the widest variety of birds, plant life and other wildlife. That’s because Missouri’s highest point [Taum Sauk Mountain] and lowest point [Hornersville swamp] are both located in this region. “Its a hotbed for natural diversity,” she said.

There are 120 conservation areas throughout Missouri, covering 188,000 acres.

“We are, in part, celebrating 80 years,” she said. “It’s your Department of Conservation. Thank you so much for your support.”

Open houses are planned throughout the state into October. Cape Girardeau was the first one and was considered a success by local Department officials. One said the reason for the big turnout may have been the opportunity to see fish filleted and be able to taste the fresh fried fish.