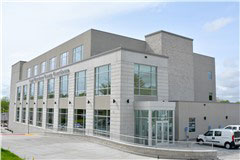 The first hearings were held at the new Cape Girardeau County Courthouse, located at 203 High Street in Jackson, on Monday, May 18.

The courthouse also includes a secure corridor, elevator and holding cells to transfer inmates from the county jail next door.

The $19 million facility replaces the Jackson courthouse built in 1908, as well as the Common Pleas Courthouse in Cape Girardeau.

Common Pleas saw its final court hearings on May 14, ending its 166 year-long history of holding civil court. That courthouse was constructed in 1854, first hearing civil cases and eventually joined the Jackson Courthouse as the site of civil, criminal and domestic relations trials in the county. The county has given full ownership of the Common Pleas Courthouse to the City of Cape Girardeau, which plans on using the building as its new city hall.

Plans for the 1908 Jackson courthouse remain unknown, with county officials saying the future use of that building will be under discussion for the next few years.