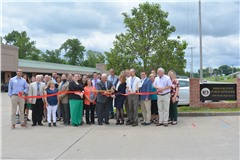 The Missouri State Public Defenders office in Jackson has moved to its new location at 2360 North High Street.

The office had previously resided in the Cape Girardeau County Sheriff’s Office building for the past 20 years. District Defender Christopher Davis said limited space at that location and the construction of the new courthouse led to the move.

“We knew it was going to be noisy and going to be loud,” Davis said. “We had outgrown that space anyway, so Cape Girardeau County took the lead on getting us moved to this new space”

The county commission found the office space on North Highway 61, across from Liberty Utilities. The space was previously warehouse space, so the office was able to customize the space for their needs.

“The project stayed on deadline and I can say that rarely do you have this type of cooperation at the county level,” Barrett said. “We are certainly appreciative.”

The office houses 11 attorneys, including Davis; four support staff and two investigators. Davis said at the previous location there was no space big enough to house the entire office staff for meetings.

“Having a big conference room really helps us out, as far as being able to collaborate as a team during staff meetings and presentations – ultimately for the benefit of our clients,” Davis said.

The new location also provides separate spaces for a break room, multimedia room and storage for clothing kept for clients who go to trial. Before, the conference room had to double for all three.

Barrett added that the new location also has dedicated space to take depositions, making it one of the nicest offices in the Missouri public defender system.

“Many offices around the state don’t have additional space in it, so even if I had the personnel to give them, they couldn’t accept them,” Barrett said. “What is great about this new space is as the region grows, we are able to grow with the region.”

The Jackson office provides legal representation to all indigent citizens accused of or convicted of crimes in Cape Girardeau, Bollinger, Scott, Mississippi and Perry Counties.