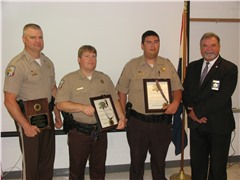 “This is given out after the year is done; after the job evaluations are done,” explained Jordan.

“I am so proud of the work done here,” Jordan told the room full of deputies and employees who had gathered for the ceremony. “You make me look good. I’m just one person. You make up the office. I thank you from the bottom of my heart for what you do and how you do it.”

The Timothy J. Ruopp Award is presented to the outstanding law enforcement officer nominated from the ranks of the Cape Girardeau County Sheriff’s Office. It has been presented to the outstanding officer of the year since 1984 in honor of Timothy J. Ruopp, a past employee of the Cape Girardeau County Sheriff’s Office who was later killed in the line of duty as a law enforcement officer in California.

Jordan made the presentation at the Cape Girardeau County Justice Center along with several members of the Ruopp family.

The Copeland Excellence Awards have been presented since 1995. An employee from each division — field operations, business operations and jail operations — was chosen to receive the award.

Jenkins started with the Cape Girardeau County Sher-iff’s Office on Jan. 1, 2013, in jail operations. He became a 480 certified jailer on June 6, 2013, and then transferred to the patrol division as a 480 certified officer on June 17, 2013.  He is currently serving in that position today.

Ward started with the Cape Girardeau County Sheriff’s Office on April 27, 2016, in business operations as a communications officer. He is serving in that position today.

Stewart started with the Cape Girardeau County Sheriff’s Office on Oct. 20, 2014. He was promoted to civilian corporal in the jail operations Division. He is serving in that position today.

Jordan said the competiton for the awards is “very stiff.”

Jordan reminded those present that “this may be my last time here to present these awards.” He has been nominated to be a U.S. Marshal, and is awaiting senate confirmation.

If confirmed, he will serve until President Donald Trump is no longer president. He has two more years to serve as sheriff until the next election. As a marshal, he would be doing much the same work he does as a sheriff, so he will be happy whether he is confirmed or not.