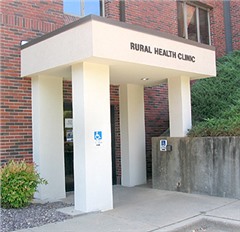 Somewhat
hidden behind the Cape Girardeau County Public Health Center at 1121 Linden St.
in Cape Girardeau is a little healthcare gem known as the Rural Health Clinic.
The clinic
has been part of the Public Health Center since 1996. Its new facilities on the
lower level were constructed late last year. The clinic moved into the new
facilities in January and opened in February. An open house was held Tuesday,
Wednesday and Thursday of last week.
Staff
reported “a really good turnout” for the open house, which included tours of
the new facility, giveaways and drawings for prizes.
The clinic
offers primary care for the community. There are six new examination rooms that
offer more room and privacy than the previous location. The clinic is staffed
by three nurse practitioners: Cheri Huckstep-Reed, FNP-BC, Jaimie Cannon,
FNP-BC, and Linda Brown, FNP-BC.
Services
provided include ADHD care, annual well checks, follow-ups, immunizations, most
basic physicals, newborn care, pre-travel physicals, sick visits and women’s
care.
The clinic
accepts Medicaid, Medicare and commercial or private insurance and self-pay.
Same-day appointments are available.
Hours are
Monday-Friday 8 a.m. – 4:30 p.m. by appointment. Call (573) 335-2229.
In this article: