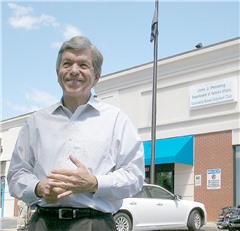 A lot of veterans are dissatisfied with the health care they are receiving (or in some cases are not receiving) from the Veterans Administration, Blunt said. “Veterans would like to have more options,” he said. He believes veterans should be able to get medical treatment at hospitals other than VA hospitals.

VA hospitals should be automatically better at handling post traumatic stress syndrome, prosthetics work, and accidents and wounds from IED attacks, Blunt offered. But for other treatments, veterans should be able to go to a medical center of their choice.

Blunt said he did not mean to be critical of all VA employees. “Thousands do the best job they can do,” he said.  The problem may be in management. For example, a facility in St. Louis has had seven interim directors. “That’s absolute mismanagement,” Blunt stated.

Even if eight out of 10 veterans would be satisfied with the service they received from the VA, that would not be good enough for Blunt. “We need to have 10 out of 10,” he said.

The outpatient clinic in Cape is doing a good job but is bursting at the seams because of limited space. It is currently in the process of finding a new location so it can expand. “The expansion appears to be moving in the right direction,” Blunt said. The Cape clinic also has more recruitable professionals available, compared to clinics in other parts of the state.

When veterans are depressed and considering suicide, they should not be put on a waiting list, Blunt said.

“There is no excuse for homeless veterans or veteran suicides. We need to better focus on the right way to get people from the military back to civilian life.”

Blunt is committed to helping America’s military heroes and their families get the best treatment available. For example, he cosponsored the bipartisan Clay Hunt Suicide Prevention for American Veterans Act which was signed into law in February. The act helps improve mental health and suicide prevention resources available to servicemen and women and veterans.