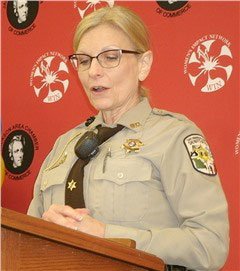 The Sheriff’s Office is operating on a budget of $7,336,000. Revenue for the operations have not gone up over the years; they have remained flat or have been falling due to legislative changes. Some revenue streams are drying up completely.

The time has come for a boost in revenue for the Sheriff’s Office.

“We need to increase our salaries to keep our officers,” explained Dickerson. “We are competing with our own local communities.”

“Minimum wage for some of my positions won’t even  be met in two years when minimum wage goes up,” Dickerson said.

“We are a jail housing 220-plus inmates. We have housed as many as 285 inmates in that jail sitting right up there on that corner. We are operating it 24/7 under arduous conditions, and the safety and protection of our officers, the inmates and even our citizens, could be put at risk if those issues are not addressed,” she said.

“An estimated tax of $7 million that we’re asking for, along with $1.4 million from Prop 1 revenues, will not even cover our future expenses. So we are still going to have to ask for an additional $2.1 million from the general revenues,” Dickerson said.

“I can’t stress to you enough the need for adding additional officers. Today, in the jail I have four staff guarding 250 inmates. The Bureau of Justice recommends at least 16 staff.

“Staff was supposed to be added over the years—it’s no one’s fault—it’s just [because of] the way the revenues have been coming in [and] the legislation changes that has taken place, that we are addressing this issue. It has not happened overnight. It has been several years in coming, and no one wants to be that person to put that tax on the ballot.

“But I’m coming to you today to tell you that we cannot suffer through this any longer,” Dickerson said. “We are going to have to address it.”