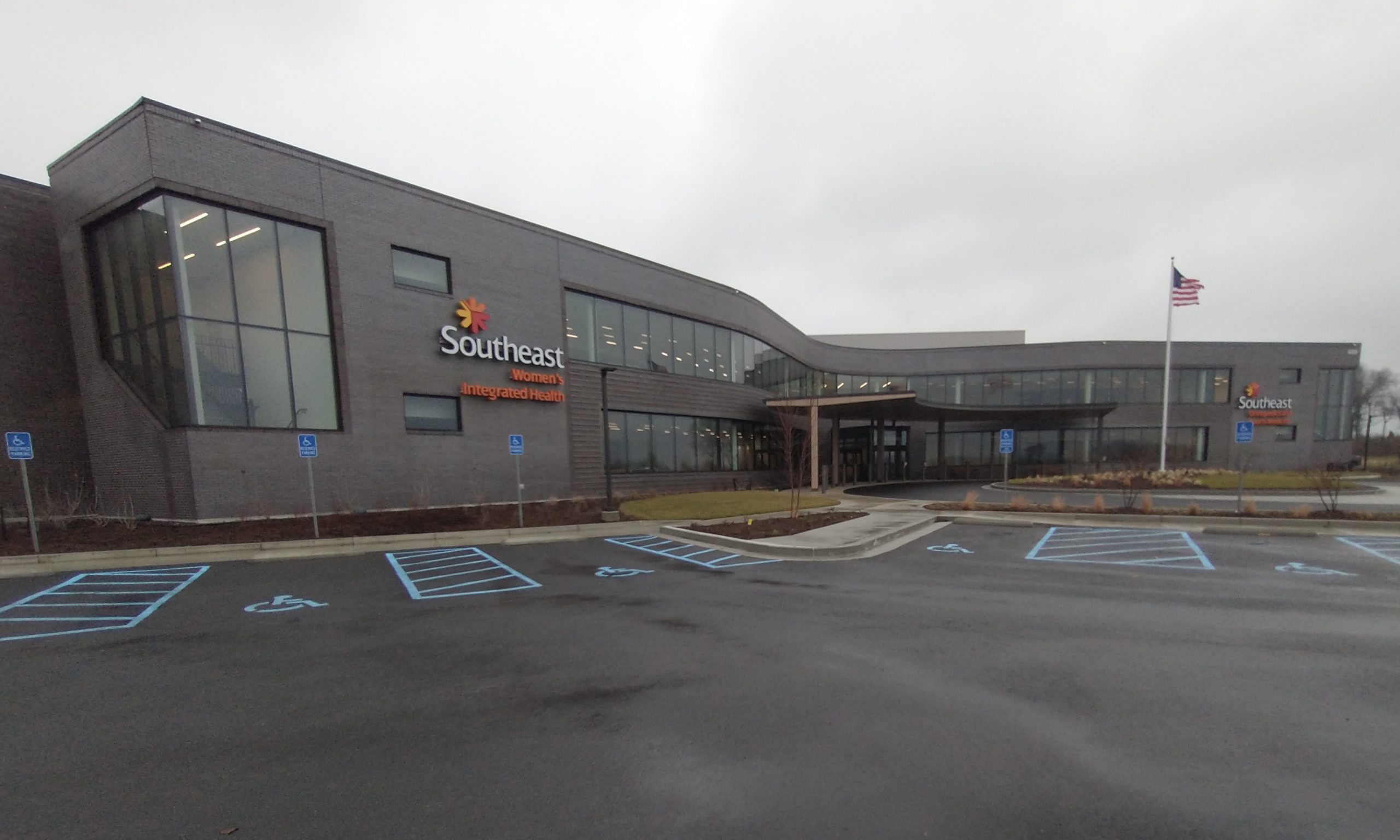 The two-story Center for Integrated Health Services is divided down the middle into two wings with women’s health occupying the left (north) side and orthopedics and sports medicine occupying the right (south) side of the building. Photo by Gregory Dullum

With the snip of a giant pair of scissors, Ken Bateman, president and CEO of SoutheastHEALTH cut through two ribbons on Thursday, Jan. 12, to celebrate the completion of a $25 million West Campus expansion project. (The ribbons were provided by the both the Cape and Jackson Area Chambers of Commerce).

The Center opened for patients on Monday, Jan. 16.

Brief oral presentations were given to representatives from the chambers of commerce, SoutheastHEALTH staff and physicians, civic lead-ers, elected officials and the media prior to the ribbon cutting. Tours of the new facility were given before and after the ribbon-cutting.

Rob Gilligan, president of the Cape Girardeau Area Chamber of Commerce, welcomed everyone as they celebrated the investment South-eastHEALTH was making in the community. “When I say the community, I’m really talking about the region,” he clarified. The impact of SoutheastHEALTH reaches far beyond the city limits of Cape Girardeau.

“We began this project a couple years ago,” said Jim Dufek, chairman of the Board of Directors for SoutheastHEALTH. The goal was to provide “exceptional care in an outpatient setting unlike any other in this region,” he continued.

The Southeast Center for Integrated Health Services is just one part of Phase 2 of a $125 million, multi-phase project, Dufek explained.

Phase 2 will go on to spend $50 million to renovate the Emergency Services Department, convert semi-private rooms to private rooms and make renovations to the Administrative Clinical Building at 1708 Lacey. Completion of that phase is anticipated by early 2024.

Phase 1 was the $30 million Southeast Behavioral Hospital that was completed in March 2021, Dufek said.

Planning is underway for Phase 3, which will add a $20 million Ambulatory Surgery Center featuring surgical suites for specialties that include orthopedics, general surgery, women’s health and much more, he added. Phase 3 “will link the orthopedic and women’s services outside of this building on this campus,” Dufek said.

Ken Bateman, president and CEO of Southeast-HEALTH, said he has been president for over eight years, and “this is probably one of the most exciting things that I have done, because when I first came to SoutheastHEALTH, my vision was always to try to bring our outpatient services to this campus. We’ve been dedicated to bringing affordable care at a price that people can afford, but at a quality that they want. And we’re starting to see that vision shape up.”

The Center for Integrated Health Services, along with the nearby Southeast Cancer Center, Southeast Behavioral Health Hospital and Southeast Medical Plaza, “will further define our West Campus as a regional hub for outpatient services,” Bateman said.

This is important, because nationally, healthcare services are increasingly moving to outpatient settings because of advancements in medical technology, patient preference and financial incentives, he explained.

On a financial note, the expansion of services will add up to 100 new jobs, which is “welcome news as we continue to rebound from the economic downturn caused by the COVID-19 pandemic,” Bateman stated in a press release. And according to an economic impact study by the Missouri Hospital Association, the $25 million in construction costs for this new facility equals to an economic impact of about $50 million to the community.

Planning for the Southeast Center for Integrated Health Services was done with the patient experience as a top priority, Bateman said.

The two-story building is divided down the middle into two wings with women’s health occupying the left (north) side and orthopedics and sports medicine occupying the right (south) side of the building.

Within Orthopedics and Sports Medicine is a Bone Health Clinic designed to help patients achieve optimal bone health, particularly those with osteoporosis concerns.

The SoutheastHEALTH Sports Medicine and Orthopedic team has grown to include five orthopedic surgeons and two sports medicine physicians, the newest of whom is Brian Sutterer, MD, who joined the practice in December.

Southeast Women’s Integrated Health will bring many essential women’s services together in an expanded space that includes 36 exam rooms, five ultrasound rooms, two procedure rooms and on-site lab services. There is dedicated space on the first floor for visiting specialists, so patients may not need to travel to St. Louis or other places to see them.

The Southeast Breast Health for men and women, located on the first floor, will have four mammography rooms, two bone densitometry rooms and one stereotactic room, along with pelvic health physical therapy services.

“Automated breast ultrasound is the only FDA-approved ultrasound technology designed for screening women with dense breast tissue,” explained Cathy Vickery, vice president for Ancillary Services. “When you use this technology in conjunction with mammography, it is very efficient at detecting invasive, node-negative cancers. Contrast-enhanced mammography is as effective as MRI for staging newly diagnosed breast cancer. It is also a great alternative for those individuals who have a barrier to undergoing an MRI. So we are pleased to have these new technologies here for you.

“At SoutheastHEALTH we are always striving to bring to those we serve the very best in technology close to home at a reasonable cost.”