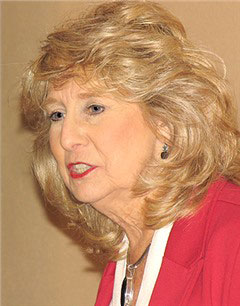 The two Republican candidates for the Missouri Senate seat in Dist. 27 spoke to the Pachyderm Club June 18.

Rehder and her husband, Ray, both worked for cable companies. Instead of moving to St. Louis when his company asked him to, Ray decided to leave the company and remain in Southeast Missouri. The Rehders then started their own business.

“When I decided to run, I had been asked to come to Jeff City to speak on a bill that was affecting the cable industry, which is where our personal business has been. I worked for Galaxy Cablevision, the corporate office, for 14 years, and I was the director of government affairs. And I was very disappointed by the number of attorneys in the room — and nothing against attorneys — we had a lot of attorneys in office but not a lot of business owners. … The frustration and the shock-and-awe of seeing our government up close, plus our children were old enough, was what made Ray and me decide that I would try running for office.”

Rehder is “100 percent pro-life; I have never wavered on that,” she added. “When it comes to things of the Bible, I don’t have a choice. God is my voice there. “What the Word of God is, it’s the Word of God.”

“I’m a staunch supporter of our Second Amendment rights,” she added.

“I am for limited and more efficient government,” she continued. “Less regulation is how you let business flourish, which is how you increase jobs. I don’t believe in big corporate welfare. I’ve worked for everything I’ve got, and I think that’s the best way.

“I’ve worked hard to reform our tax credit program and our prevailing wage reforms that we’ve done. There are some things I won’t compromise on, but I did have to swallow some compromise on our prevailing wage reforms, and that was because we need more. Our communities, our county governments really suffer with that. We pay St. Louis wages. And so we’ve made some really good reforms and we need to have more.

“I don’t play politics with people’s lives,” Rehder said. She supported prescription drug monitoring, even though many Republicans opposed it because they thought the legislation led to bigger government.

“I don’t back down and I don’t give up,” Rehder said. “You won’t find me switching my votes if there is an election coming up. That’s not who I am. What you see is what you get with me.”

Rehder is an ardent supporter of U.S. Pres. Donald Trump; she was a delegate for him at the last convention.

Rehder said the biggest challenge in state government is keeping government small so it doesn’t have so much control over our lives. In the rural areas, people are still stuck in their homes because of the government’s response to COVID-19, she said. It will be up to rural areas to fight to keep government small.

Rehder said she is not in favor of Medicaid expansion. “As a state, we can’t pay for it,” she said. “It will take from other services to pay for it.” She said the free market is beginning to step up to help those who need health care coverage. One example is doctors offering concierge service.

She promised to work on health care costs and coverage if she is elected.

Kathy Swan is a local business person and conservative Republican who grew up in Cape Girardeau. “I am proud to be a Southeast Missourian, and primarily so proud because of the values that we hold here,” she said.

Swan began her business training early. After World War II, her father and mother started their own business. She started answering the phone for that family business when she was 9 years old.

When her mother passed away in 1975, Swan had two jobs: a nurse and a bookkeeper for the family business.
A very proud NRA member, Swan supports Second Amendment rights.

Swan is no lobbyist. She didn’t go to Jefferson City to be one. She went “because I felt we needed a very strong conservative voice in Jefferson City with our Southeast Missouri values, and someone who can get things done for everyone here back home, and for the State of Missouri as well” she said.

“I also support Pres. Trump, particularly in his efforts regarding China, and with [U.S. Speaker of the House] Nancy Pelosi. I filed a resolution this session praising Sen. [Roy] Blunt and Sen. [Josh] Hawley for their efforts to stop Nancy Pelosi from playing her impeachment games and allow our president to get back to work,” she added.

“Our liberals have allowed jobs to leave this country to go to China,” continued Swan. “Our technological advances and research have been stolen and have gone to China. And we need China out of our country. And we need to get the manufacturing back, we need to get the jobs back, and we need to stop the outflow of our research and our information we use to support our jobs, our communities and our citizens.”

Swan was disappointed in the U.S. Supreme Court decision made earlier that day that allowed “young illegal immigrants” to continue to receive immunity, she said.

Swan is “100 percent pro-life.” She was in disbelief when the Roe vs. Wade decision was made in 1973. Although she was several months pregnant at the time, she and several others picketed an abortion clinic on North Kingshighway in Cape Girardeau.

She has supported every pro-life piece of legislation that has come before the legislature. She sponsored two and cosponsored three. She played a major role in the strongest pro-life bill in the nation that was passed by the Missouri Legislature in 2019, regarding unborn babies feeling pain at 17 or 18 weeks, so abortion is not allowed past that period of gestation.

“I am a very strong, conservative Republican who believes and stands for the Republican platform of free enterprise, economic opportunity, protection of innocent lives, [and] a solid, smaller government. That’s what we are about,” she said.

Swan said the biggest challenge she faces in Jefferson City is “to save innocent lives and stop killing babies.”

Swan was asked if legislation could be passed to protect family members who care for someone who dies from COVID-19, to keep social services from invading their lives. Currently there is talk of legislation to protect nursing homes from being sued. She said there is no reason discussions on this topic cannot be held. “If we’re talking about nursing homes, we certainly can be talking about liability for you caring for a loved one.”

Swan was asked about the movement to defund the police. She said she definitely agrees with the president’s position on law and order. “Looting, burning and destroying property are totally unacceptable. I am with him about standing with law enforcement; protecting our law enforcement—they’re trying to protect us,” she said. Will Missouri defund the police? “The answer is No! We’re not going to do that,” she said.

Swan was asked if medicaid expansion passes, and the state has to have a balanced budget, where would the money come from? She replied, “Education.” Other discretionary areas that can be cut are mental health and the processing of rape kits.

Cape Girardeau County Commissioner Paul Koeper also spoke at the Pachyderm meeting. His comments will be printed in a future article regarding his race for 1st District Commissioner. He faces two challengers, Dwayne Kirchhoff and Josh Biester, in the Aug. 4 Republican primary election.