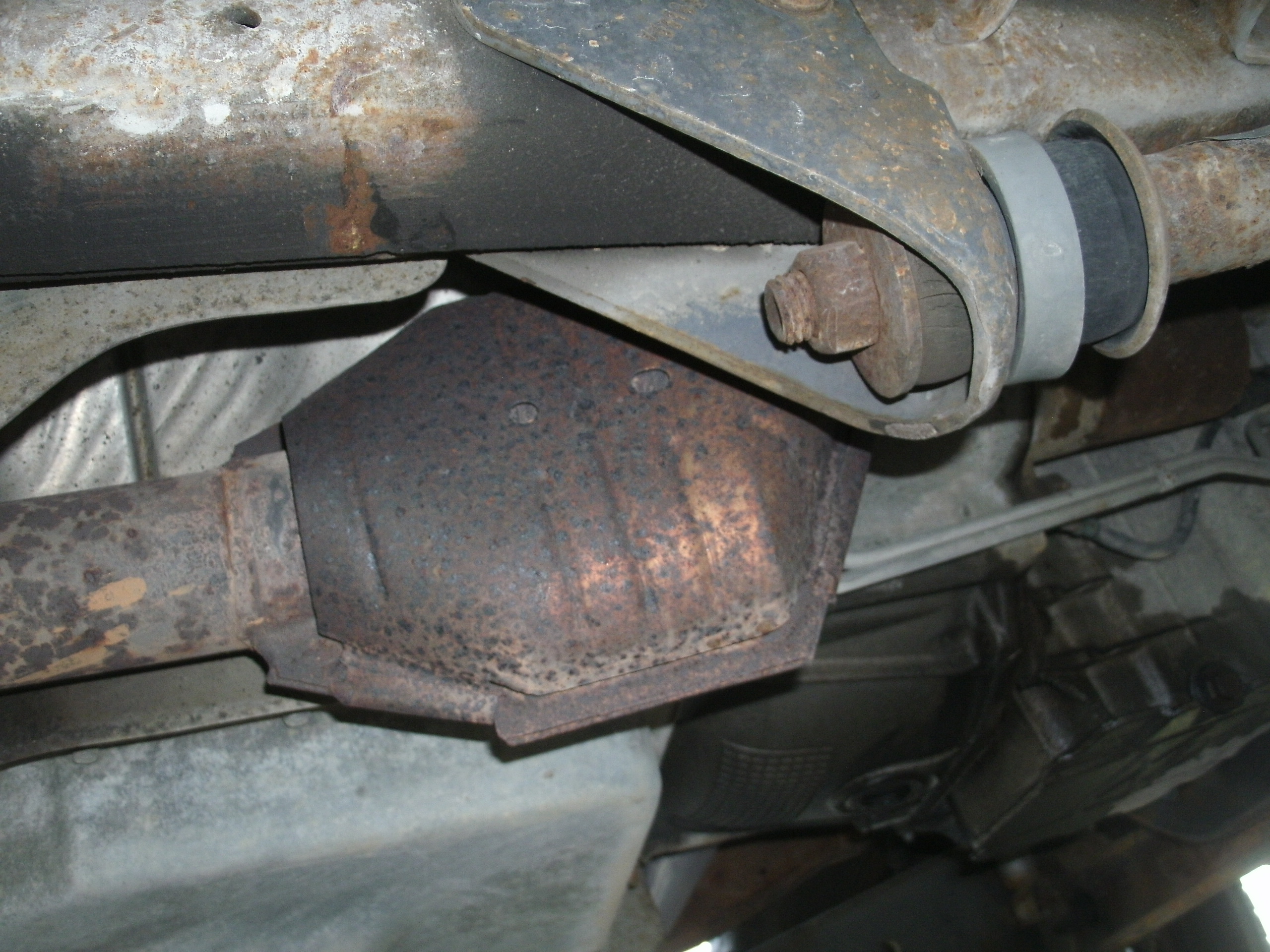 Catalytic converters, which look like a small mufflers on the exhaust system, convert hazardous exhaust into less harmful gases. They do this using platinum, palladium or rhodium. In recent years, the values of these precious metals have increased significantly, leading thieves to steal catalytic converters to recycle them. Photo by Gregory Dullum

You park your vehicle for the night. In the morning, you climb in, turn the key, and it sounds like the engine is about to explode! A loud rumble booms in your ears and drowns out your radio, no matter how loud it was turned up.

You look under your vehicle to see if the muffler or exhaust pipe came loose overnight and is hanging down or dragging. You don’t see anything amiss. But something is definitely missing! While you were sleeping, a thief cut off your catalytic converter and stole it!

Our area is seeing a rash of catalytic converter thefts. They have spiked over the past two years as the price paid for recycling certain metals in them has skyrocketed.

The Jackson Police Department reports that six catalytic converters were stolen so far this year, while a dozen were ripped off in 2020 within city limits.

The Cape Girardeau County Sheriff’s Office reports seven catalytic converters have been stolen in 2021 from rural county residents, which is an increase from previous years.

More than 50 have been stolen in the City of Cape Girardeau in the past 12 months.

“This is a sharp increase in comparison to years past, and this can be attributed to the increase in value of the precious metals that can be recycled from the catalytic converters, including trace amounts of rhodium and platinum,” said Cape P.D. Sgt. Joseph Hann.

“The majority of these thefts have certain details in common,” he continued. “Targeted vehicles are generally vehicles that have a higher-than-usual clearance, like delivery vans, work trucks, etc. Vehicles that are targeted are usually parked in commercial lots overnight or left in secluded residential areas.”

“With us, it has been cars and trucks,” said JPD Cpl. Rick Whitaker. Thieves use battery-operated electric handsaws to quickly cut through the pipes holding the catalytic converter in place. “They get in, get out real easily,” Whitaker said. “It’s brazen.”

According to the National Insurance Crime Bureau (NICB), catalytic converter thefts have seen a significant increase across the country since March of 2020, the start of the global pandemic.

“We have seen a significant increase during the pandemic,” said David Glawe, president and CEO of NICB. “It’s an opportunistic crime. As the value of the precious metals contained within the catalytic converters continues to increase, so do the number of thefts of these devices. There is a clear connection between times of crisis, limited resources, and disruption of the supply chain that drives investors towards these precious metals.”

A catalytic converter looks like a small muffler on the exhaust system. It converts hazardous exhaust into less harmful gases. To do this, manufacturers use platinum, palladium, or rhodium. In recent years, the values of these precious metals have increased significantly. As of December 2020, rhodium was valued at $14,500 per ounce, palladium at $2,336 per ounce, and platinum going for $1,061 per ounce. Typically, recyclers will pay $50 to $250 per catalytic converter.

The top five states for catalytic converter thefts during this time were California, Texas, Minnesota, North Carolina and our neighbor to the east, Illinois.

In 2020, there was a continual climb in thefts. January had the fewest number of thefts at 652, but it continued to climb markedly throughout the year, with December having 2,347 thefts.

Eighteen states — including Missouri — are considering legislative actions to curb the theft problem.

“Removing a catalytic converter takes only minutes using some basic, readily-available, battery-operated tools from a local hardware store,” added Glawe. “And for the vehicle owner, it’s costly due to the loss of work, finding and paying for alternate transportation and then paying anywhere from $1,000 to $3,000 to get your vehicle fixed.”

Cape Police have caught some suspects. “We’ve actually had a few arrests,” Hann said. An investigation has led police to believe at least some of the thieves come from Southern Illinois, steal the devices here, and then return home to sell them, Hann said.

Is there anything owners can do to protect their vehicles?

The best defense is to park in a locked garage, Whitaker said. But when that’s not possible, he recommends parking in well-lit areas close to building entrances. “Have a car alarm set to go off with vibration detection,” he suggests.

If personal vehicles must be parked in a driveway, consider installing motion sensor security lights. These may make some thieves think twice, and they will leave the area with your vehicle untouched.

Whitaker says to install cameras, such as the RING doorbell cameras. These will capture images of the thieves, helping the police to catch them.

Another option is to etch your vehicle’s V.I.N. into their catalytic converter so that it can be identified if a reputable recycler accepts the item.

During the month of October, Gearheads, 415 S. Hope St., Jackson, is inviting the public to schedule an appointment for a free catalytic converter etching.

“It will take about an hour, and we will engrave your VIN directly on the catalytic converter,” said Gearheads owner Carlos Ybarra. “This public service will hopefully deter thieves from taking a part from your car that could possibly be traced.”