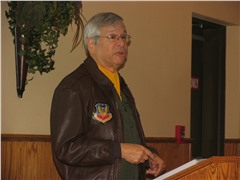 Most people who think of Christmas combined with flying probably think of holiday travel in crowded airports or imagine Santa flying through the night sky delivering presents to sleeping boys and girls. They don’t think of B-52s dropping thousands of bombs on North Vietnam.

For State Sen. Wayne Wallingford, “the 11 Days of Christmas” (the title of his talk) or “Operation Linebacker II” (the official name of the operation) is a vivid memory of Christmastime flying; it was the last battle of the Vietnam War.

“It was the largest B-52 commitment of the war,” he said. He was one of the pilots.

Wallingford recounted the battle and his participation at a Pachyderm Club meeting Nov. 21 at Delmonicos Steak House in Jackson.

On Dec. 13, 1972, the North Vietnamese delegation abruptly walked out of peace talks with the U.S.

The goal of Operation Linebacker II, conducted from Dec. 18 to 29, 1972, was to destroy major military targets and infrastructure in Hanoi (the capital) and the port city of Haiphong. It was thought that this would bring the North Vietnamese government back to the negotiating table, lead to the release of U.S. prisoners of war, and, as U.S. Pres. Richard Nixon had ordered, “win the war,” Wallingford said.

The B-52 Stratofortress was the most destructive element the U.S. had in its aerial arsenal. Wallingford said he was 3 years old when the B-52 was designed. He was in first grade in 1952 when the B-52 flew its first test flight. “Little did I know that I would be flying a little over 300 combat missions in it 18 years later,” he said.

“In all likelihood I won’t be around to see its retirement,” he added. “Today it is still flying and fighting, and will probably last until 2040 or even longer. A popular saying is, ‘The last B-52 pilot has not been born.’

The deadliest weapon that the B-52s faced was the SA-2, a type of surface-to-air missile (SAM). The B-52s cruised at 450 mph; the SAMs flew at 2,000 mph. There were 200 SAM sites in North Vietnam. On average, more than 150 SAMs were fired for every aircraft they brought down.

Antiaircraft guns were not effective against the B-52s. The bombers flew too high to be hit by them. Even so, Hanoi was considered the most heavily defended city in the world.

As the operation began, B52s took off from Guam every 72 seconds. The line of B52s heading for Hanoi and Haiphong stretched 70 miles.

It was “press-on” mission, meaning the crews were to “press on” no matter what opposition they faced or what equipment failures they suffered. Even if an engine failed, they were to press on.

After the first bombers from Guam had been in the air for five and a half hours, the bombers at U-Tapao, Thailand, took to the air.

Wallingford was on his fifth deployment when he left U-Tapao to bomb North Vietnam. He had nearly 300 missions under his belt by this time.

The bombers from Thailand made it to Hanoi before the ones from Guam, because Thailand was much closer.
“There was just enough time to say the Lord’s Prayer, sing the Air Force Hymn and recite the 23rd Psalm, and then you were over Hanoi,” Wallingford said.

“You wonder what’s in store for you, but you don’t want to know the answer. The psychological strain of flying into the missile-filled skies over North Vietnam was immense,” he said.

“SAMs came at us like an angry swarm of bees. When hit with an SA-2, the B-52 would crack open like an egg,” Wallingford said.

During the briefing the next day, the pilots were told, “Well, we thought we were going to lose a lot more of you than we did.”

There were so many SAMS fired that Wallingford said, “It felt like you could have walked across the sky on the tips of those missiles.”

Wallingford’s radar navigator had a downward-looking optical viewer so he could look below the aircraft, but on this night, he saw so many  missiles heading toward his aircraft, he never looked outside again, Wallingford said.

One SAM headed directly toward Wallingford’s aircraft. About 10 seconds before it would have struck, Walling-ford initiated evasive maneuvers. He put the aircraft in a turn that shouldn’t be made. He thought he would pull the wings off. It felt like driving a loaded cement truck with no power steering, no automatic transmission and no brakes, he said.

“Suddenly there was an explosion; a brilliant flash. When a SAM exploded, it was so bright you could read a newspaper in the cockpit. The airplane vibrated and rocked wildly from side to side. Our aircraft was hit with the shrapnel from the surface-to-air missile.”

The missile had exploded prematurely without hitting the aircraft.

“If it had detonated closer, our wing would have been shredded, sending us spiraling to earth in a ball of flames,” Wallingford said.

The B-52 has 12 fuel tanks, eight engines and 12 hydraulic systems, and 56 miles of controls and wiring. “It was only by a miracle, by the hand of God, who guided those fragments into our aircraft, the fragments missed every single aircraft system, including the six crew members,” Wallingford stated. “One thing for sure, your senses are sure stimulated by aerial warfare.”

No one knows how many holes were put into his aircraft by the shrapnel. After he returned to Thailand, the ground crew tried to count the holes, but they stopped counting at 680, Wallingford said.

A halt to the bombings was ordered for Christmas. This was a mistake. It gave the North Vietnamese time to rearm.

On day 9 (Dec. 27) The North Vietnamese sent a message that they wanted to restart the peace talks in January. Sixty B-52s faced an unknown number of SAMs, and two of the bombers were lost. One of those two crashed as it landed in Thailand. Wall-ingford saw it happen.

The most dangerous position during these bombings had been the No. 1 (lead) position in a cell of three planes. Nine of the 15 B-52s lost were in this position. Wallingford flew in this position, and he said he felt fortunate to make it back every time.

Wallingford returned to the U.S. in April 1973. He received the silver star on Sept. 18, 1975. The silver star is the Armed Forces’ third highest personal decoration for valor in combat. It is awarded for “gallantry in action against an enemy of the United States.”