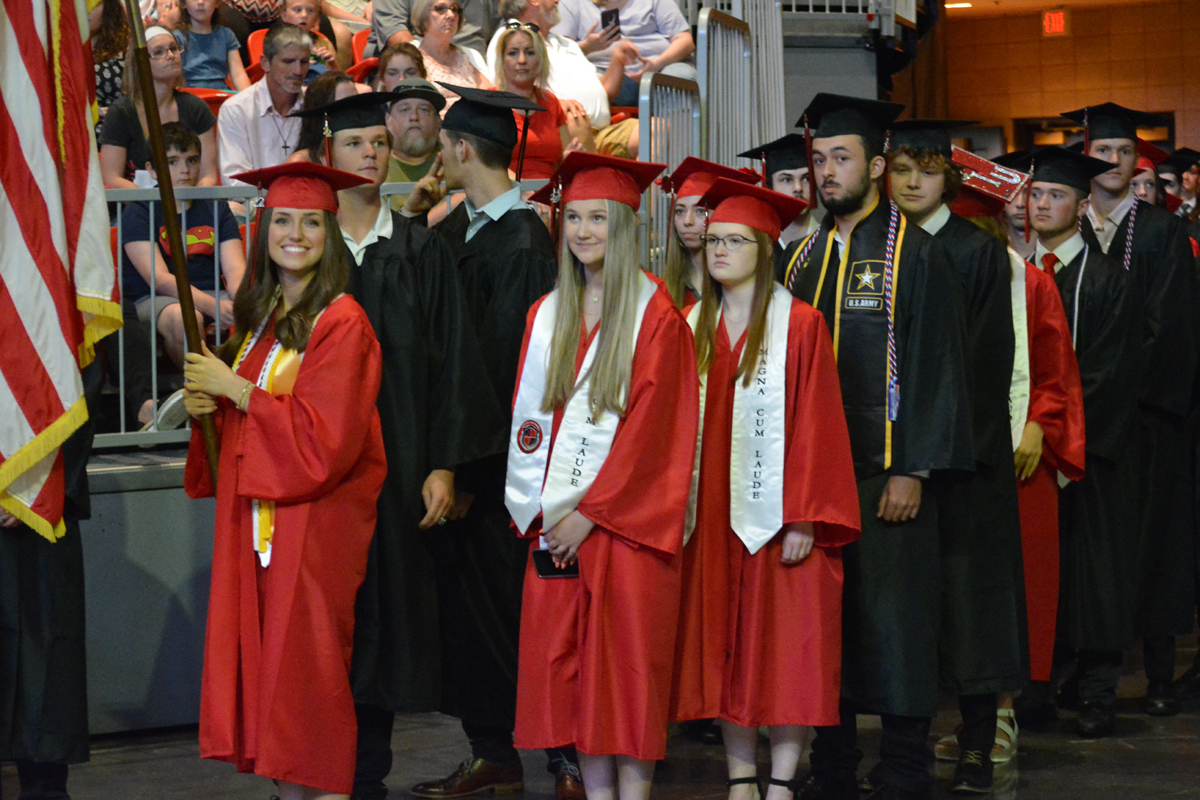 Jackson High School honored 389 graduates in the class of 2022 during its commencement ceremony on Friday, May 20, at the Show Me Center in Cape Girardeau.

“The graduating class has had a very unique high school experience,” JHS Principal Seth Harrell said. “For the longest time, Jackson High School had been a 10th-12th grade campus and freshmen students were at the junior high. This class was the first group in a really long time that became freshmen on the high school campus.”

The class was the first to take classes in the new J-wing addition at JHS and they entered high school at the same time as the class above them.

“We had over 800 students who came to our campus for the very first time that fall,” Harrell said. “It was a very interesting situation, but these individuals handled themselves very well – as did they each and every year they were on our campus.”

In addition, the graduates’ sophomore and junior years were affected by the COVID-19 pandemic. “These individuals have done a phenomenal job of doing what is expected of them,” Harrell said, adding that the graduates had to navigate several changes to the school structure including virtual learning and block scheduling.

“You have had to navigate some very challenging situations,” Harrell told the graduates. “I hope that you were able to create some lasting memories. I thank you for what you have done for our school, and I am thrilled to continue some of the traditions that you have helped create.”

Graduates were recognized for earning scholarships during the ceremony, including $35,000 awarded by the Jackson R-2 Foundation and $55,000 awarded from local businesses and organizations.

In addition, 137 students were recognized for successfully completed the A+ scholarship program, serving a combined 7,877 hours of tutoring over the past four years.

Chandler Jansen, Jack Mabuce and Mackenzie York were recognized for their near-perfect attendance throughout high school.

JHS science teacher Andy Helle, who was chosen as this year’s commencement speaker, told the graduates their symbolic walk across the stage represents the beginning of adulthood.

“The only difference between the world you are living in now and the ‘real world’ we keep talking about is two things – the increased freedoms you will enjoy and the increased responsibilities that are tied to those freedoms,” Helle said.

Helle gave the graduates advice for answering the call of the “real world,” including knowing what makes them unique to help them develop their strengths and manage their weaknesses, not to panic because life is served one day at a time and to make sure to do their best work in all aspects of their lives.

“Everyone who has ever won the Daytona 500, the Super Bowl and the World Series all have this in common – they showed up and they did their best work,” Helle said. “It did not guarantee success, but it guaranteed their chance at success.”

Superintendent Scott Smith also advised the graduates to strive for excellence by putting in more effort than they are required to. “Doors will open and lead you to where you need to be in this world – and this world needs you graduates,” Smith said.