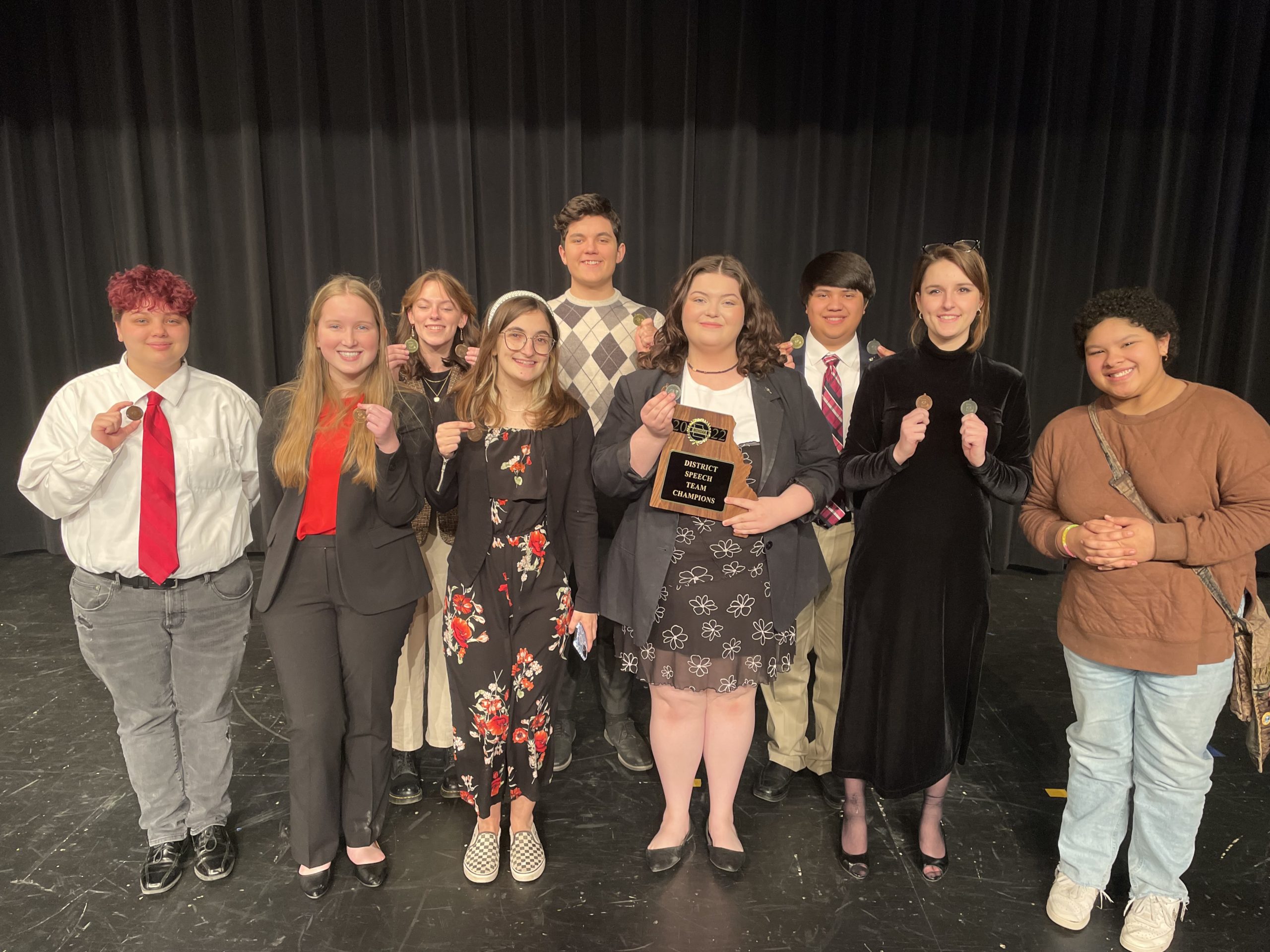 The Jackson High School speech, debate and drama team was named the 2022 district speech team champions earlier this month, with four students moving on to the state competition.

Jackson was one of fifteen schools that competed in the first in-person district tournament since 2019. The individual and two-person team events were held on March 12 at Ste. Genevieve High School. All Jackson competitors advanced to the final round of competition and were district medalists.

The state-bound students said there were many challenges this year due to the long break in in-person competitions. For one, both Jackson’s team and other school’s teams were smaller this year and had less returning students than usual.

“It’s kind of like we hit the reset button on a lot of the speech programs,” Robbins said. “We have a lot of newer performers, but we have less older performers for them to model themselves after. I think it strongly affects the quality of our performance, but I think we are going to bounce back. I think we are in it for the long haul.”

Robbins said the Jackson team had around 15-20 students going to each competition before COVID-19. This year, only eight to 10 Jackson students competed at any competition outside of the two plays at districts.

In addition, many of the team’s usual competitions throughout the school year were cancelled due to COVID-19 or weather issues. “We had to reschedule our invitational due to weather, but many of the other schools’ invitationals were never rescheduled,” Brandenburgh said.

During his freshman year, Robbins said he was able to perform his piece over 200 times before competing at the district level. This year, the team only traveled three times before having to compete at the district level and all overnight events were cancelled. “You can still prepare, but getting to the competition is much more stressful,” Robbins said.

“I don’t have performance anxiety at all, but when we go to these competitions, it’s the most nerve-racking part of my week,” Spies, who joined the team this school year, said.

Despite not having many competitions this year, Clubbs said the Jackson team was still pretty lucky compared to other schools. “For some people at districts, it was their first time performing and that will be only time we’ll get to compete for the rest of the year,” he said.

Despite its challenges, all the students who competed last school year said they were happy to return to in-person events this year.

“I hated it being virtual,” Brandenburgh said. “You can’t play off the feeling of the room virtually.” During the virtual competitions last year, each competitor would have to record their performance and send the video in for the judges.

“It is definitely cool to be back and hear people tell you how well you did afterwards,” Clubbs said, adding that feedback was limited from the judges last year and students weren’t able to watch the videos of their competitors. “I didn’t even know what I was losing to, which is important to help you improve,” Clubbs said.

Pyrtle said going to the speech and drama competitions has helped her social skills and interacting with other people. “You meet a lot of really cool people and there’s so much different art you can appreciate at these events – whether it is acting, poetry, or learning about new things.” she said. “At districts, there was a kid who did his informative speech on Dungeons and Dragons, which was neat to listen to and learn about.”

Brandenburgh added that she was able to get closer with the other Jackson students on the team, who she didn’t know very well before this year. ”It’s a nice little community,” she said. “It’s interesting the people that you are able to meet, who I may not have ever talked to without this experience.”

The team members said they have helped each other improve their individual pieces and they will continue perfecting their performances as they prepare for state competition.

“People on the team have helped me like add aspects of my piece – including specific actions and using a certain diction,” Spies said. “I always get compliments on a specific part that I would have never thought to do on my own.”

Spies won the district championship in the prose reading category and will perform a passage from the book “How to Survive a Horror Movie” by Seth Grahame-Smith at the state level.

“My piece is about how stupid characters in horror movies are,” Spies said. “It talks about the method on how to survive and the seven deadly sins committed by horror movie characters.”

In the prose reading category, Spies has eight minutes to read the passage out of a binder, performing the different characters in the story. “A lot of people use different voices for characters,” Spies said. “At different points, I’m Steve Irwin and Beetlejuice.”

Robbins, who won the district championship for original oratory, will compete at state level with his persuasive speech on the psychological bias called belief perseverance called “Changing our Minds.”

“People are objectively really bad at changing their minds once they believe something already.” Robbins said. “The speech first proves that the bias is real and then talks about the strong effects it has had on the world.”

In the original oratory category, Robbins has to write his own 10-minute speech and perform it from memory. He said he has incorporated world events like World War I into his argument and ends his speech on how important it is to personally try to actively combat the bias and question their beliefs.

The pair’s duo interpretation piece, “Action News: Now With 10% More Action,” allows both of the performers to play multiple characters throughout the skit.

“We play news anchors and also act out the different segments of the news,” Brandenburgh said. “Our first story is on a puppy that eats a guy’s face.”

Clubbs said the duo interpretation category requires them to perform their 10-minute script from memory without direct interactions with each other.

“We can’t look at each other, but we can move around on the stage,” Clubbs said. “We also play multiple characters, so not only do I play news anchor, but I also play a 7-year-old child and a political woman.”

Pyrtle, who won second place at districts in the poetry reading category, will perform a series of poems called “Really Bad Poetry” at state featuring poems about life, character, pet cats, bad supermarket dreams and having a dog as a best friend.

“They are all supposed to be awful but funny,” Pyrtle said. “Poetry reading is usually an event that focuses on social issues, but mine are mostly about characters and dog farts. I go up there and read them dramatically and I act like what I’m talking about is like really deep and profound.“