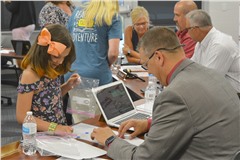 The Jackson R-2 School District approved the budget for the 2019-20 school year. The budget includes $62 million in expenditures. The District estimates it will receive $58 million in funding and will have a balance of $28 million at the beginning of the budget year – July 1.

More than 50 percent of the District’s funding comes from local taxes, followed by 39 percent coming from the state. Federal funding amounts to six percent, and funding from the county results in two percent. Superintendent Dr. John Link added that the District budgets very conservatively in regard to funding.

The biggest expense for the District is salaries, totaling 51 percent of the budget. The next highest expense is employee benefits at 17 percent. The District employs approximately 850 people, including 346 full-time teachers.

“We just finished a $30 million bond project and we are still sitting with a 26 percent reserve,” Link said. “There are a lot of expenditures that we’ve spent on the new buildings that we won’t have to spend moving forward, so I don’t foresee any cuts to programs or class sizes getting larger. We just have to sustain and maintain.”

• The Board approved the purchase of 830 iPads for kindergarten and first grade students to use. The purchase is the final implementation of the District’s one-to-one initiative, which has already given all students in second grade and higher a Chrome-book to use in the classroom and at home.

The District reached out to Apple and received a 10 percent discount on the retail price for the iPads due to the bulk purchase. The iPads will be under Apple Care, a warranty program that could replace dropped or otherwise-damaged iPads.

Apple provided financing for a three-year lease purchase, with the District making $100,000 payments each year. Terry Gibson, director of finance, said the arrangement is a softer hit to the budget, and they received a low rate on financing, so it made financial sense to lease-purchase.

Gibson added that the iPads would last at least three years, so they will not need to be replaced before the initial iPads were paid off. Unlike the Chromebooks, the iPads will stay in the classroom and should have a longer shelf life.

Associate Superintendent Matt Lacy said they decided to go with iPads for the younger students because they haven’t learned to use a keyboard or a mouse yet. The iPads also provide the students more interactivity.

• The Board approved a purchase of 10 new school buses to replace the oldest buses in the District’s fleet. The buses being replaced are 19-22 years old.

Gibson said the District had been putting two or three new buses into the budget every year, but the District was able to get a discount for buying 10 at once. The lease purchase will cost $1.1 million and will be paid over three years.

The District owns about 70 buses, 50 of which run every day that school is in session. Link said some of the new buses purchased are for special needs students.

Link added that the goal is that after three cycles of these larger purchases, the District will have a fleet of buses that is under 10 years old.

• The Board approved various food and transportation bids during the meeting for the upcoming school year. Bimbo Bakeries, who has been used by the District for the past 10 years, received the bid for bread and bread products. Prairie Farm received the milk and dairy bid, as well as the ice cream bid.

• The Board approved an evaluation of the District’s Title 1 Preschool and Reading programs. The preschool program is for children below where they should be in social emotional development, cognitive skills, language, literacy and mathematics.

The District received $670,000 of federal funds for these programs, a portion of which must be used for family involvement. The reading program hosted a Family Involvement Night on May 2 to give parents and other caregivers reading activities to work with the students over the summer. Students were also able to pick out books to take home with them.

• The Board approved a new teachers salary schedule for the next school year. The adjustment raised salary levels for veteran teachers. Link said it would help the District gain veteran teachers from other schools.

“Several times when we have offered jobs to teachers from other schools who had 10 to 15 years of experience, they were losing money,” Link said. “We had one this go-around that is going to take a pay cut to come to Jackson.”

• The Board approved a cooperative agreement that allows out-of-district junior high students to take part in District’s sports and extra-curricular activities. Board Member Paul Stoner voted against the agreement. Stoner was on the Board when the agreement was first approved and said there were initially concerns about it not being what was best for Jackson students.

Link said he would look into the data to see how many students were actually taking advantage of the agreement and how many of those students were then attending Jackson High School. He did not have that data on hand, but said he thought there were at least some who were participating in track and field.

Out of district students could only take part in Jackson activities if their school does not have that activity and if their school is close to the district. One of the challenges for students from surrounding schools is they have to find their own transportation to and from the activities.

Other Board members said it would be good to get that information for next year, but it would be unfair to make any change so close to summer camps starting for fall sports.

The students were invited to compete after qualifying for the fair at Southeast Missouri State University’s regional competition in March. The international fair is the largest pre-collegiate science competition in the world, featuring 1,800 students from 81 countries.

Jones and Rees’ project involved finding a solution to arsenic water poisoning in developing countries such as Bangladesh. The students found that current solutions to the crisis are too expensive and energy-consuming for these countries to implement, and decided to research a bioengineering solution.

They developed a new microorganism that could lower the arsenic in groundwater.  Jones and Rees identified the DNA in the rhizobium bacteria that detoxifies arsenic and transferred that DNA through gene cloning into a safe version of E. coli that is found naturally in the affected water. After testing, they found a 20 times decrease in toxicity using the microorganism.

The pair won the Wolfram research award at the competition, winning free access to a data analytic software used by scientific professionals. Both said they hope to continue showing this project at other competitions, so it could eventually be used in other countries.

Jones and Rees also advocated more science opportunities for their fellow students to the Board, so younger students could go to competitions like they have.

• Members of Jackson FFA were recognized by the Board for their achievements at the 91st State FFA Convention. The organization sent 10 teams to the state competition, which consisted of 27 members.

• JHS industrial tech students presented their projects that they competed at the district and state level. The projects included a small engine, a mechanical vice and a wooden blanket chest. The department took nine projects to the state competition, winning four state awards.