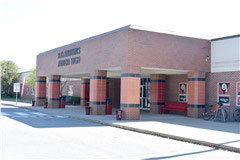 The Jackson R-2 School District continues to grow, with a junior high expansion and an updated strategic plan on the way.

As of March 6, the district has 5,169 students enrolled in kindergarten through 12 grade and an additional 305 students in its early childhood program. Superintendent John Link said at the latest school board meeting that the district added seven new students during the past month.

With the growth in mind, the school board approved an expansion of the Jackson Junior High School that includes expanded cafeteria space, a new library and larger band and choir classrooms. The $6.1 million project includes 11,754 square feet of new construction and 29,144 square feet of renovations.

Construction by Brockmiller Construction has already begun on the project, according to Link. Brockmiller has started work outside the building, where the addition of a new library and band room will be located.

The expansion will open in phases, with some of the renovated spaces being done by next school year. Work that is currently scheduled to be completed by the fall includes a new entrance vestibule, new restrooms and improvements to the entrances and exits in the cafeteria. In addition, the counselor’s offices will be moved to be closer to the front entrance.

The building’s addition is hoped to be completed around winter break, including the new library, new band room and a new corridor on the east side of the building.

The remaining renovation work will be completed summer 2021. That final work will include combining the existing band and choir rooms to make a larger choir classroom and expanding the cafeteria.

When the project was first being discussed last July, Link said they had 250 students in band classes at the junior high and that the cafeteria expansion was needed so students were no longer “packed in” during lunch.

“There’s nothing [in the junior high addition] that we don’t need,” Link said. “There’s nothing there that’s fancy or out of the ordinary. It’s just what schools that are growing have to do – we have to keep up with our growth.”

In the district’s strategic plan, the first phase of facility renovations included the projects completed during the Proposition J construction. According to Link, the second phase was always going to include increasing capacity at the junior high.

“We knew the junior high and high school was going to need some increased space,” Link said in July. “That was our phase two and phase three in our strategic plan.”

During the strategic planning, phase three included a performing arts center at the high school, which would also free up space to expand the cafeteria and add an additional 12 classrooms at that school.

The board is scheduled to approve an updated strategic plan in July, which will cover the next five years. Link said at the February school board meeting that the plan will try to incorporate the previous plan to make sure ongoing or unachieved aspects of the current plan are not forgotten.

“We don’t want to get away from our plan, and we don’t want a new plan,” Link said. “We want something that continuously grows.”

The plan started its development after Link took over as superintendent in 2015 and was created by a committee of administrators, board members, parents, teachers, students and community members. Besides the facility changes, the One 4 One Technology Initiative and service learning across the district came out of the plan.

“Five years ago, when we did this, I think it completely changed the district,” Link said in February. “It brought the community together with the district, and it gave us a focus. People started believing in us because we put out what we were going to do and we did it. Every time we make a decision, we are still using that plan.”

Academically, the district has continued to succeed and has recently received a strong Annual Performance Report by the Missouri Department of Elementary and State Education for the 2019 school year. The district exceeded state averages in areas of academic achievement, college and career readiness, attendance and graduation rate.

The district also had a successful year athletically, with the JHS football team finishing their regular season undefeated in back-to-back years for the first time in the program’s history.

The team also made it to the state title game, which Jackson hadn’t previously done since 1995. Jackson was one touchdown away from winning its first state championship in program history, losing to Carthage 27-21 in overtime.

The Jackson cheerleading squad made history by being the first athletic program at Jackson to win back-to-back state championships. In 2018, the team won the championship by one point, but last year took the title by seven.

Dr. Jessica Maxwell will become the associate superintendent of elementary education and student services for the district, starting on July 1.

Maxwell will be taking over elementary education and student services duties from Assistant Superintendent Beth Emmendorfer, who is set to retire this year.

Emmendorfer started her 30-year career as a special education teacher and has served as an assistant superintendent for 14 years. She has been recognized across the state of Missouri for her advocacy in the area of special education.

The Jackson R-2 Foundation gave away over $141,500 in the form of scholarships, teacher grants and special projects over the last year. Some of the special projects were for various clubs and fine arts programs, including sending the JHS Marching Chiefs to Columbia to perform at the state championship football game.

The $55,000 given in the form of teaching and learning grants funded special projects that expand educational opportunities for students and additional support for teachers.

The foundation also runs the Heroes 4 Hope program, which helps students who may not have the financial means to participate in extracurricular activities. It also covers the Power Pack program, which provides weekend meals and other necessities for students.

All of the funding for these programs is raised during the Alumni and Friends Golf Event and the Red and Black Affair, as well as through gifts from donors and local businesses.