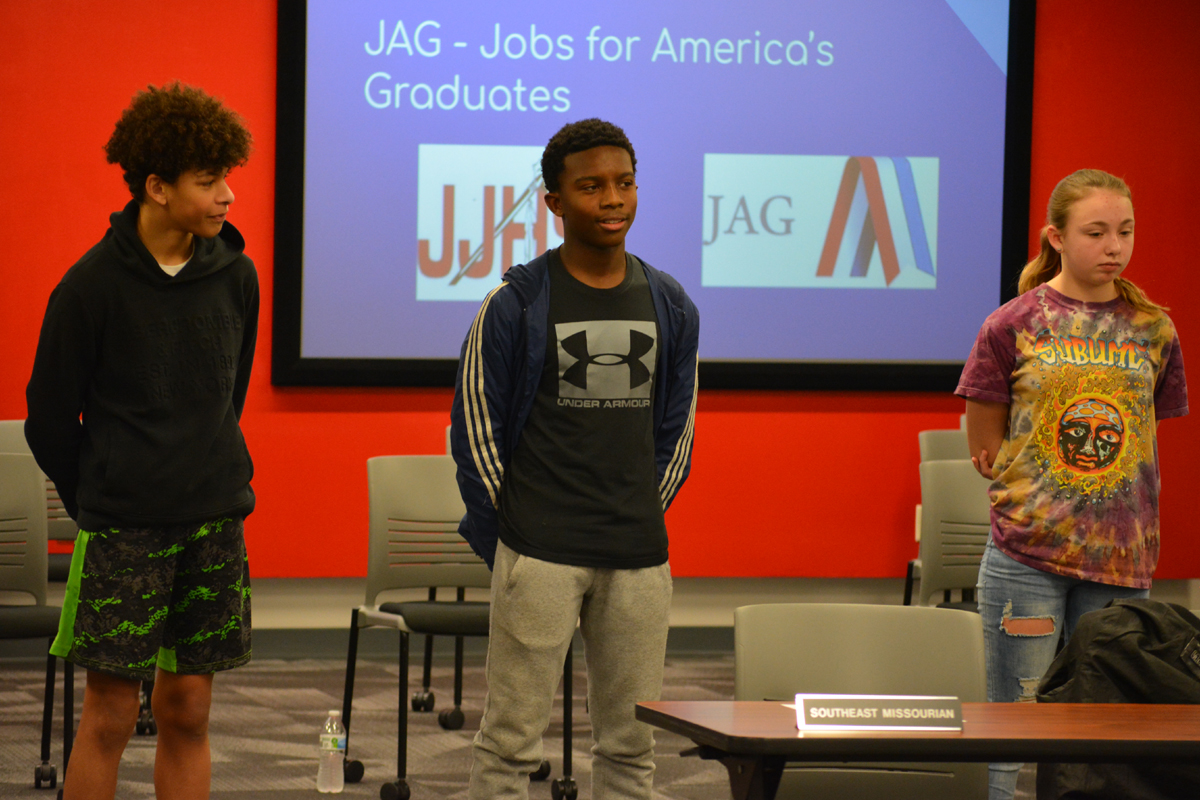 Students in the Jobs for America's Graduats (JAG) class at the Jackson Junior High School spoke to the school board about the new program during the Dec. 14 meeting. Photo by Jay Forness

“The attorney general has put out notice of things that he expects districts to do and not do,” Superintendent Scott Smith said of the changes.

Smith said the district’s legal counsel and the Missouri School Board Association have advised the district that other attorneys may not share Schmitt’s legal opinion, but both recommended changes for the district’s COVID-19 plan to “make sure we follow as much as we can.”

“The way our government is currently working, they are throwing a few caveats to make sure we follow as much as we can,” Smith said. “The good news is that we really have been following that already. We do not require masks in this district – we haven’t all year. We have recommended masks, but not required them.”

One major change in the plan is that masks will no longer be required on school buses for staff or students. “That is something that has been challenging to try to implement, Smith said. “At this point, we feel like we do not have to be considered public transportation, and we feel that is an argument we could win.”

Another change removes the term “quarantine” from the plan and replacing it with “stay home from school activities.” Smith said the number of quarantines have “significantly” gone down this school year and the district’s new COVID-19 policy now matches how the district would respond to any other communicable disease students may catch.

• The school district approved an increased for salary schedules for non-certified staff – including custodians, secretaries, food service workers, paraprofessionals and bus drivers – that will go into effect Jan. 1.

“We are struggling to find quality candidates for the rate that we’ve been paying, especially with the minimum wage increases over the last few years, so we have needed to make some adjustments,” Superintendent Scott Smith said.

The new opening hourly rates in the district will be $11.93 for custodians and cooks, $12.27 for paraprofessionals, $12.82 for building secretaries, $18.10 for coordinators of student services or human resources and $21.30 for bus drivers.

All non-certified staff, excluding bus drivers and coordinator positions, will also get a one-percent step increase on the salary schedule for every year of experience they have in the district or experience they brought in when hired.

“Over the last six months, what I’ve noticed is that we have individuals that have been here for five years that are making virtually the same amount of money as people who have been here one year,” Smith said. “This will actually separate that out and give them credit for being here for an extended period of time.”

Terry Gibson, the district’s chief financial officer, said many of the lower steps on the previous non-certified salary schedule had to be raised due to minimum wage increases in Missouri over the past few years. “The current way it was handled, everyone up to step seven and eight was being paid minimum wage,” Gibson said.

The minimum wage is set to increase from $10.30 to $11.15 in Missouri at the beginning of next year. Gibson added that the new salary schedule will also make the salaries competitive when compared to the Cape Girardeau Public Schools.

“We would like to do more,” Smith said of the current increase. “We started looking at a much higher number, but we just can’t. This is where we feel comfortable at this time.”

• The board approved a timeline for the district’s new strategic planning process, which will now be completed internally by the district.

“We looked at a variety of options, visited with several companies and received price quotes, but at the end of the day a lot of the work was still going to have to be done internally,” Smith said.

The district will hire a third-party consultant for around $5,000 to lead the development of the final goals to be implemented over the next five years.

“We know it will take a huge amount of time, but it is something where we are willing to do the bulk of the work internally,” Smith said. “It will help me get out into the community and hear more from the community about what they want.”

Input sessions and surveys will be conducted in January and February to obtain stakeholder input. That data will be reviewed in March and a group of 30-50 representative stakeholders will be invited to participate in additional planning sessions in April and May.

Smith said the third-party consultant would help the strategic planning group narrow down from 10 to around five new goals for the district. “They will meet with the groups for three-hour sessions, break down what we have given them and fine tune the goals,” he said.

Once the goals are finalized, a plan with action steps attached to each goal will be developed through June and July before the plan is brought before the school board in August. After board approval, the plan will be shared with staff members and the community before being implemented that school year.

• The school board approved a grant budget to receive $600,000 funding from the Missouri Department of Health and Senior Services for COVID-19 testing and other prevention costs during the 2021-22 school year.

The district will be reimbursed $72,000 for staffing a COVID coordinator and contact tracers, $108,000 for COVID testing services and $420,000 for district-wide staff training.

Smith said every staff member would be given an opportunity to complete COVID-19 training and receive a $500 stipend for attending.

• Joe Kinder of Stifel Financial Corp. presented a refinancing plan for the district’s 2012 bonds that could save the district around $1.4 million. The bonds are eligible to be refinanced on a tax-exempt basis during a 90-day period due to 2017 changes in the federal tax laws.

Kinder said the low-interest rate environment, as well the ability to do the refinancing tax-exempt, allows the district to save a significant amount of money without extending the bond period scheduled to end in 2032.

Kinder estimated the new interest rate will be lowered from 4% to around 1.5%. The district is projected to pay a total of $9.85 million through 2032 instead of the previously set $11.3 million through the same time period. The savings will be approximately $165,000 each year.

Kinder will obtain a credit rating for the district and will present final rates for a refinancing deal at the next school board meeting scheduled for Jan. 11, 2022.

• Jackson Junior High School students in the Jobs for America’s Graduates (JAG) program presented to the school board about the new class. This is the first year a JAG class was offered at the junior high and is the first JAG program in the district.

Shelby Kight, who teaches 32 students in JAG over two class periods, said the program is more prevalent in secondary schools, but there are a number of middle schools and junior high schools in Missouri that have started a JAG program.

“The whole premise of the program is to give students the opportunities to learn how to get a job in the future,” Kight said. “We do a little bit of employer engagement at the seventh and eighth grade level, but the biggest things we work on are service learning activities, leadership skills and life skills.”

Kight said the students are also able to receive extra academic support through the program and be able to gain experiences outside of the classroom. The class has participated in service-learning opportunities at Connection Point Church and the SEMO Food Bank in Sikeston.

In addition, the students were able to visit the Jackson Fire Department and learn more about firefighter occupations.

“As the year goes forward, our main goal is to get out more in the community and engage with employers,” Kight said. “We are very lucky in Jackson, where people in the community are always willing to help us out and let our kids come in. I’ve collaborated with a lot of JAG specialists around the region, and they are not as lucky as we are.”

The program is paid for through a $20,000 yearly grant from the Missouri Department of Social Services, which helps fund activities related to the class.

“The reason we started the JAG program is we have been looking for ways to get more kids involved in our school – whether that is through clubs or athletics or other programs to get them hooked on coming to school,” JJHS Principal Bryan Austin said. “We made the decision early on that we wanted around 35 to 40 kids to start with, play it out for a year and then try to increase it from some of the things that we learned.”