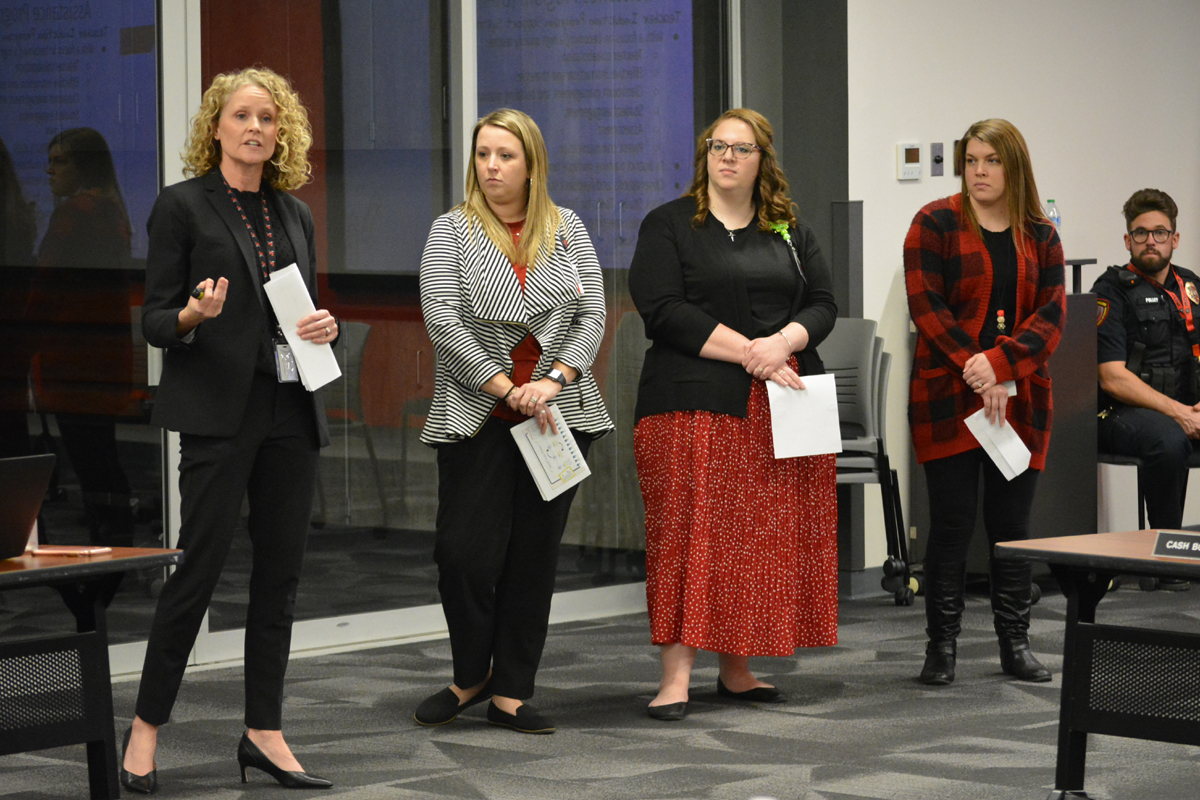 The Jackson R-2 School Board voted to put two tax increase propositions on the ballot this April during its regular board meeting on Jan 10. If both ballot initiatives pass, voters will see a tax increase of 91 cents per $100 of real estate and personal property assessed valuation.

Proposition I will ask voters to increase the operating tax levy by 47 cents to increase staff salaries and protect existing programs, transportation services and class sizes.

Proposition N will ask voters to approve a $60 million bond issue funding various facility improvements throughout the district – including a new performing arts center, an additional classroom expansion at Jackson High School, new classrooms/gymnasium at North Elementary School and a new facility for the at-risk/ACES program.

The bond, which would be paid for with a 44-cent debt service property tax increase, would also cover repairing and replacing roofs, safety improvements throughout the district and refinancing existing lease-purchase debt.

The two propositions will be separate votes put forward to voters during the general municipal election on April 4, with the tax levy requiring a simple majority and the bond issue requiring four-sevenths of the vote (57.14%) to pass.

“We’ve taken a lot of time to look at the plans,” Smith said. “In order for this district to continue offering the programs that we offer and continue being Jackson R-2 aswe all know and love, this is something that needs to take place.”

Smith said the district’s fund balances have been decreasing over the past five years, due to increasing staff, facilities and programs to keep up with the district’s enrollment growth without increasing revenue.

“This is an initiative that is definitely a ‘need’ and not a ‘want,’” Smith said. “Currently, we have the lowest tax rate in the county and it’s been 17 years since this district has increased a tax levy.”

The district’s last ballot initiative, Proposition J, included a $22 million bond issue to cover various building projects at Jackson High School, Jackson Middle School, North Elementary School and West Lane Elementary School. That proposition, which passed with more than 70 percent of the vote, did not include a tax increase.

“As a district, we have nearly 1,000 more students than we had 11 years ago,” Smith said. “That is a significant growth, and we are in the top 50 fastest growing districts in the state. That is a good problem, but it also brings challenges our way.”

The largest growth can be seen at the high school, which has grown by more than 300 students in the past five years. Smith said the growth was in addition to adding freshmen in the building during the 2018-2019 school year.

“We are full,” Smith said. “We can’t put up a no vacancy sign, and we enroll kids every day. If you walk into our classrooms and see how full our classrooms are, it’s tough.”

“Whenever you do a bond issue, you are talking about two to three years before the first student steps into a new room.”

Assistant Superintendent Keenan Kinder said the district has already split several rooms at the high school to add additional classrooms, but is running out of space. “It’s hard for people to believe when they see the scope of this building that we don’t have enough space,” Kinder said. “The commons area where kids eat lunch is as big as an aircraft carrier, and we have to have four separate lunches to get them all seated and fed.”

In addition to facility needs, Smith added that propositions would bring back the district’s ability to offer competitive employment opportunities. “We are not staying competitive with our salaries,” he said. “We have always taken pride in being a leader in this area when it comes to salaries, and that is no longer a part of Jackson – so the recruiting and the retaining of staff is tough.”

The vote was 5-1, with Kristen Lewis being the sole opposing vote. Kelly Waller did not attend the meeting. Lewis said she would have voted in favor of the operating levy if it was a separate vote, but was opposed to the bond issue.

“My biggest concern with both the levy and the bond is that this will add 91 cents to the tax rate,” Lewis said. “Yes, we are the lowest tax levy in the county, but this will make us the district with the highest tax rate within a three county area.”

If both propositions pass, Smith said the district’s tax rate would still be at the median compared to 50 Missouri districts that are around the same size as Jackson.

Board Vice President Greg Farrow said the board has worked on long-term plans to tackle the district’s enrollment growth, but growth estimates from various demographic studies have “been blown out of the water.”

“You can set a plan, but when you gain this many students, it feels like we are constantly behind it,” Farrow said. “We have so many kids that want to come here, and I don’t think we have ignored the issue until we were here, but here we are.”

Smith said a community group has already reached out to run a “vote yes” campaign, and the district would provide factual information regarding the two propositions.

• The board approved strategic planning reports from the academic achievement and portrait of a graduate committees.

The student achievement plan included researching options to add more K-12 teachers, as well as adding or restructuring instructional specialists throughout the district including classroom coaches and interventionists. The plan asks the district to research the needs and benefits of decreasing class sizes in all grade levels and implement a plan to address that concern.

In addition, the plan offers steps to provide high-quality professional development to make sure students receive high-quality instruction, steps to implement research-based instruction practices while ensuring that high levels of learning are promoted for all students in the district.

The portrait of a graduate plan, which focused on skills outside of academics that students should learn, highlighted the need for students to be use soft skills in classes, be given service-learning opportunities and be explicitly taught various character traits.

The plan states that students will be taught interpersonal communication skills in every course – including practicing their oral, written and technological communication skills. Students are also expected to experience service-learning opportunities, as well as reflect on their service experiences, within the school day each year.

Each portion of the portrait of a graduate plan includes providing professional development to staff to ensure a clear understanding of expectations and regular assessment to determine the effectiveness of the instruction.

“In ESSER III, there are strings attached to it and hoops to jump through, just like any federal grant,” Lacy said. “There is a 20% learning loss requirement tied to these funds – that comes to $931,000 we have to tie to learning loss.”

Lacy said claiming the full $4.6 million and tying that much funds to learning loss would be difficult and suggested the district claim half the funding this year and claim the rest of the funding next year.

“Going through our numbers, we can tie $450,000 to learning loss,” Lacy said, adding that the change in funding still has the district’s spending less than the district’s incoming revenue.

“In the end, we can still recoup the federal money next year and set us up nicely for the budget next year,” Lacy said.

• The board approved May 31-June 22 as the dates for this year’s summer school. Students who take part in summer school will attend 16 days of programs, with no session on June 19 due to the federal holiday Juneteenth.

The program helps teachers who are new to the district learn effective instruction and classroom management strategies. These new teachers are provided training sessions throughout the year, in addition to observations, meetings, book studies and lesson studies.