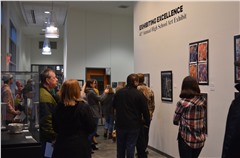 McGuire said she feels everyone in the show is incredibly talented and putting her art up with theirs made her feel like a career artist. “It’s very professional, and I feel like I’ve started to make my place in the art community,” McGuire said. “This competition has also given me a leg up for when I start college in the fall.”

Her winning printmaking work, titled “Three Truths and a Lie,” is an arrangement of four linoleum prints depicting a woman wearing a skull mask. McGuire said it “represents being patient and keeping calm in situations you can’t control.” Her oil painting, “La Lune,” which shows a woman in front of a crescent moon, is one piece in a series of 12 works of art based on space-themed tarot cards.

Schell won for her charcoal drawing “Oluwaranti,” which was inspired by one of her sister’s good friends whose family is from Nigeria.

“In the background of this portrait of her, I drew small Polaroid photos illustrating many aspects of her life that show a blending of her Nigerian heritage with the culture she grew up in here in America,” Schell said. “Some of these images include family portraits, the cinema, and her feet walking along the sidewalk while she listens to music. I found that this piece really illustrates a story of who she is and her unique character due to this blending of cultures.”

Schell said the competition encouraged her to create art that tells a story and can impact others, as well as driving her to create original pieces from her own photos and ideas.

Hendershott received second place for his fibers artwork, “Dad.” He was inspired by his father, and used a batiking process to create his art. Batiking is a method of dyeing cloth to create designs and pictures.

“The feeling of having my art on display is one of immense pride and joy,” Hendershott said. “Seeing the unique talent of the other artists in the show demonstrated to me the difficulty of placing. There were so many incredible and creative pieces on display, I was honored to be among them.”

The exhibition was judged by Justin Miller, an associate professor at Southeast who oversees student painting. Miller said he has judged a multitude of art exhibitions in the past and had “never seen one with as consistently strong artwork as the pieces submitted to the show.”

The exhibition’s top award, Best of Show, was given to Megan Murphy from Poplar Bluff for her drawing, “I need to do Laundry.”

More than 150 art pieces from area high school students are currently in the Rosemary Berkel and Harry L. Crisp II Museum at Southeast Missouri State University’s River Campus. The exhibition will be on display through March 17.