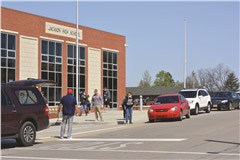 Superintendent Dr. John Link said at the School Board meeting on April 14 that they also hope to have a smaller ceremony for the 12 seniors going into the armed services, as they will most likely not be able to attend graduation in June or July.

“Most of them will be gone to basic training before June, so we want to do something special for them,” Link said. He added that they might hold the smaller graduation for these seniors at Connection Point Church or at the high school.

While he hopes these new graduation dates will work, Link warned they might have to change if there are further developments with the coronavirus.

“One day you make plans and then the next day you make different plans,” Link said of the decision making process during this pandemic. He added that they don’t have many black-and-white answers at the time. “It’s so fluid and changing every five minutes.”

One decision the District has been able to make regards how it is handling grading distance learning. At the secondary schools, the District is implementing a “held harmless model” where student’s grades can only go up while they complete schoolwork at home.

“Your grade on the last day [in school] is going to be your grade,” Link said. “You can make it better but you can’t make it worse. He added that the District is specifically working with students who were failing to get them to a passing grade.

Link said about 50 to 60 percent of students are currently engaged in distance learning. He said some of the students are just not engaged, but others are special education students or are students with limited Internet access.

“We are starting to get concerned with what school looks like next year and what athletics look like in the fall,” Link said. He said they will need a plan for students who are at a high risk of being affected by the coronavirus, because several of them will not want to attend school next year.

He added that work has already begun to try to figure out how to hold summer school virtually, if necessary. Link said if they have to move to a virtual summer school for secondary students, they would try to push back elementary summer school.

“We will try to look at  some kind of a transitional restart summer school for elementary students,” Link said. This version of summer school would take place for approximately two weeks in late July or early August at every elementary school.

Students would be able to ride the bus, eat meals, see their current teachers again for some closure and meet their teachers for the next school year. “Five and a half months out of school for those little guys is going to be a long time, and we have to find a way to get them restarted,” Link said.

During the School Board meeting, which was held virtually on Zoom, the Board voted unanimously to continue paying all District staff through the end of this school year, even if they are not currently working due to the closure.

“The way we looked at it is everybody that was working on March 13 and would be working today is getting paid,” Link said. This includes workers at the after-school kids club and long-term substitute teachers who were scheduled to work through the end of the year.

Link added that the District is doing well financially this year, although it is preparing for revenue to decrease next year due to projected sales taxes being lower and having more free or reduced lunch students.

Director of Finance Terry Gibson added that the Missouri Department of Elementary and Secondary Education has assured the District that state funding will not go down for the current school year.

Link said the District is currently saving money because it is buying less fuel, and it is not filling any open positions for the current school year.

• The Board voted to join the MAAA insurance consortium. The consortium consists of between 10-15 school districts including Farmington R-7 and North County R-1.

The consortium was started 13 years ago, and Link said that in his research, its plans were normally better and lower priced than what Jackson had previously paid. He added that he expects next year’s prices to be a decrease.

“The only unfortunate thing is that you do lose control because now insurance is determined by 13 schools,” Link said. He added that the deal includes a five year commitment to stay in the consortium, with a buy out option.

District employees will have a base plan with a $3,000 deductible, with options to buy in to decrease the deductible or to have a health savings account.

Previously the base plan was $2,000. Link said that by changing the deductible, the district’s price per employee would only go up about $12. The District currently pays $578 per employee and will pay $589 per employee next year.

Pharmaceuticals, vision, dental, life and long-term disability insurance will remain the same. An employee assistance program where employees can get counseling has been added to the benefit package.

“We did not have a comprehensive cohesive resource for teachers to use, so they were spending a lot of time making their own lesson plans,” Emmendorfer said. “We heard a lot of that in the past two to three years – of elementary teachers being overwhelmed with the work put in to reading instruction.”

Emmendorfer added that the District was not seeing an increase in student’s reading proficiency and through research found that “we were missing the phonics piece of it.”

She said teachers and instructional facilitators have spent the past year researching the science of reading and the resources out there to support reading instruction. Presentations by the top two companies were given on the March 16 professional development day, and teachers voted on what company’s resources they liked more.

Around 90 percent voted for LearnZillion, so the District is moving forward with that company. Emmendorfer said the total cost of the resources will be $131,000, but the costs will be split over the current budget and next year’s budget. She added that teachers will receive the first group of materials before the summer break.

Emmendorfer said with LearnZillion’s resources, teachers will be able to focus on implementing the instruction instead of having to create lesson plans from scratch.

• The Board approved its yearly cooperative partnership agreement with St. Paul Lutheran School and Immaculate Conception School to have some of their older students participating in Jackson sports.

Link said last year they had three eighth graders from these schools playing football, three that played track and one that was a part of the wrestling team. He added that some of these students have become JHS students after taking advantage of the partnership.