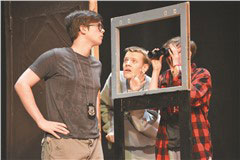 Jackson High School drama students have been preparing two comedic plays for performances this week and for district competition later this month.

This year’s one act play, Any Body for Tea, and the reader’s theater production, The Internet Is Distract – Oh Look a Kitten, will both be performed at 7 p.m. on March 5-6 in the JHS Auditorium, before competing in the Missouri State High School Activities Association speech and debate district competition on March 13 in Ste. Genevieve.

Any Body for Tea features a group of older ladies who will resort to murder in order to get the attention of a handsome detective (played by Gio Mayfield-Wubbena).

Mayfield-Wubbena, who plays the detective Dennis O’Finn said his character gets trapped in an elaborate plot by the women, where they continue to commit murders in order to spend more time with him. “He wants to transfer to the arson squad because these crazy ladies are constantly pestering him,” he said.

It is after the group has been spying on Mayfield-Wubbena’s character from afar that the ladies decide to sacrifice one of their own to start a murder investigation at their home. “I think it’s kind of logical for her,” O’Neal said of her character’s leap to murder. “What else were they going to do?”

Mayfield-Wubbena said the comedy comes from the extremes that the women go to keep him around, as well as how seriously the detective characters take this ridiculous situation. Neal Harrison plays Captain Williams and Zane Lintner plays Kramer, the assistant detective on the case.

“I haven’t played very many serious roles before, so it’s very refreshing to me to be able to play a serious guy,” Mayfield-Wubbena said. “But I still really love being a part of comedies, so it’s been a ton of fun.”

The entire cast says they have gotten close over the rehearsal process. “I love all these people,” Harrison said of his fellow cast members. “I’ve been in several productions, and in every one it’s a great deal of fun to get to know everybody in the cast. You create a sort of family with every production.”

For Letner, she was able to experience that feeling for the first time. “Theater was never on my radar until theater class,” Letner said. “This is my first play, so I was worried coming into it, but these guys have been really great to work with and definitely made me comfortable.”

This year’s reader’s theater production, The Internet Is Distract– Oh Look a Kitten, follows high school student Micah (played by Rebekah Mansfield) having to navigate the distractions of the internet in order to finish her English paper.

Mansfield said the play is very relatable. “I go online to research things and then I’m on 25 different websites,” she said.

The play shows Micah trying to finish her paper on The Great Gatsby. She decides to get on the internet to double check the color of the light in the book, as well as get a great quote to end her paper, but as soon as she turns on the Wi-Fi, Mansfield’s character gets bombarded with FaceTime requests, pop-up ads and click-bait articles that distract her. The majority of the cast plays multiple characters, including the personification of popular websites.

Lainey Heick plays Amazon, Peyton Lintner is Face-book and Nora Kilburn is Wikipedia. Fulgencio Martinez, who plays Google, said they have worked hard on figuring out how to bring each of the website’s essence to their performance.

“How we ended up making Google a character was by making him very manipulative,” Martinez said. “Google is a part of everything in your life, and they want you to stay online so that they can get money.”

Martinez added that in the play, Google starts out as hyper and eager to help, but becomes more of an evil mastermind as the play goes on.

The cast is rounded out by Layton Lipke (who plays an internet-obsessed friend of Micah), Abby King (who plays Micah’s mom) and Wyatt Dunning (who plays various characters including a video game announcer).

Because it is reader’s theater, there are no sets, costumes or props in the production. The cast has to be creative in getting their various characters to come across in the play’s staging. For instance, the various internet characters turn toward and away from the audience depending on whether or not they are “turned on.”

“Considering what we have, it’s pretty fun to have to create the set with ourselves instead of with actual set pieces,” Assistant Director Avery Clubbs said. “It’s just a black ladder and some black boxes and black stools, which look pretty boring, but the story is what keeps you engaged.”

For the majority of the show, Google stays on the ladder, hovering above Micah at all times. In addition, the character’s used their script binders to mimic the computer screens in front of them.

King said the play is able to stay comedic (Lintner does play a YouTube cat performing the plot of The Great Gatsby at one point) without disregarding the darker side of internet life.

“I think it speaks to our dependency on technology today,” King said. “It was eye opening to realize that these companies are run by humans, and humans can become corrupt very easily. If we’re not careful with what we do online, it can become a dangerous problem.”

Tickets for the March 5-6 performances are $5 and can be purchased at the JHS auditorium box office before the show.