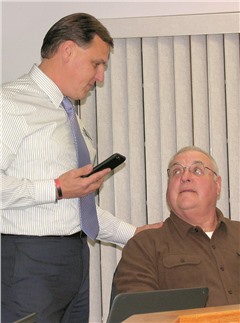 ‘Coach T’ — Jackson R-2 School Board Member Bruce Thomas — was surprised when Jackson Junior High math instructor Roseann Bruns, ‘lifeguard’ Joe Moss  and Principal Cory Crosnoe called him “Little T” and ganged up on him for not completing his homework.

The three were play acting as they demonstrated how the ‘ICU culture’ at the junior high intervenes when students don’t complete their school work assignments. They showed how various steps are taken to make sure assignments are completed and students learn the material.

Assistant Superintendent Dr. Beth Emmendorfer had a cameo role as Little T’s mother, who received a text message about his failure to do an assignment.

The program was first implemented in 2011-12. It was difficult to get started, Crosnoe admitted, but has been tweaked over the years and the last two years has proved to be very successful.

Before the ICU program was started, 10-15 students were “retained” — they did not progress to high school because of failing grades. That number has dropped to zero.

Having an ICU culture at a junior high is rather unique. “This isn’t something that goes on around the state or around the nation,” Crosnoe told the Board. “You will see some [programs] at middle schools and at some small high schools. For a junior high at our size, it’s very, very difficult to implement.”

It’s hard to get students at the junior high age to complete homework assignments if they don’t want to do them, Crosnoe said. “How do I get a kid who doesn’t like math to start doing his work?” he asked. “Every kid is different. We have to find out what motivates him.”

Basically, students are “hounded” to do the work and given the help they need to understand it. “We don’t let anyone slip through,” Crosnoe said.

Students encourage each other to do their assignments.  Crosnoe told the Board, “Kids will say, ‘It’s easier to just do it.’” They tell a student thinking about not doing his homework, “’Don’t try it. They’re going to hound you all the time.’”

R.O. Hawkins Junior High is scheduled to receive a ‘Brick House’ award for its successful implementation of the ICU culture.

• Audit: The Board accepted the 2014-15 audit of its financial statements conducted by CliftonLarson-Allen, LLP. There were no findings of irregularities or improprieties. The Jackson R-2 District received an “unmodified opinion, which is the best you can get,” said Tim Dierker, a St. Louis manager of the auditing firm.

• Policy changes: The Board approved minor changes to policies affecting School Board elections, member qualifications, resignations, training, and compensation, based upon changes in state law.

• Health insurance: The Board gave the administration permission to move forward in selecting health insurance for District employees.

Board members expressed some concern abut switching from Anthem to United because of differences in the healthcare networks but were told that the United network of doctors now includes both local hospitals and is 99.9 percent the same as Anthem’s.

“I’m very confident in all three groups,” said Superintendent Dr. John Link. “They’ll work hard for us. We want to start giving our folks [employees] some options. When we do that, we’ll have to educate them,” Link added.

~ Provide basically the same health care that employees now have;

~ Offer optional coverage for families of employees; and

~ Will continue to have employee premiums paid by the District.

At some point in the future, as the costs of premiums rise, the District will not be able to pay 100 percent of employee premiums, Link said. “We have a few more years before we’ll have some tough conversations. There is a breaking point.”

The District is seeking 18-month coverage instead of 12 months, so the insurance policy will no longer run January-December, but will run July 1-June 30, the same as the school budget, making it easier to figure insurance costs into the budget.

The administration planned to meet again with the insurance committee before making a decision and bringing the matter back to the Board next month.

• The Board gave the administration the green light to begin developing a five-year strategic plan. The plan will be “a living, breathing document that will guide our District,” said Link. Every year it will be updated by the Board but will look five years into the future.

The plan will be developed with input from the community, staff, parents, teachers and the School Board. It may consist of about two dozen people who will meet for brainstorming sessions.

The plan will list four to five things the District needs to do and include a time line, instead of the District trying to accomplish everything at one time, Link said.

• FFA: The accomplishments of JHS Future Farmers of America at Districts and State were recognized by the Board. Jackson placed third (out of 10) in Districts in rituals and first in grasslands. Jackson put forth a good effort at State but the competition was stiffer and Jackson didn’t do as well.

• Marching band: The JHS Marching Chiefs were recognized by the Board. “We never went to a competition until about three years ago,” said Band Instructor Tom Broussard. “This year we went to two festivals instead of one. It was a great season. A very successful season.”

Thirty-eight JHS band students will audition for All State Band, along with about 1,500 students from throughout the state. “We’ve got a good crop going up this year,” Broussard said. “We’re real confident.”

A new tradition was started: the team members signed their names to the back of the State trophy in front of the Board.

The retired teacher luncheon on Wednesday (today) was moved this year to be an early dinner at 4:30 p.m. The location remains the same: the JHS Commons.

• Next meeting: The Jackson R-2 Board of Education meets regularly at 7 p.m. on the second Tuesday of each month at 614 E. Adams, Jackson. The next meeting is scheduled for Tuesday, Dec. 8.