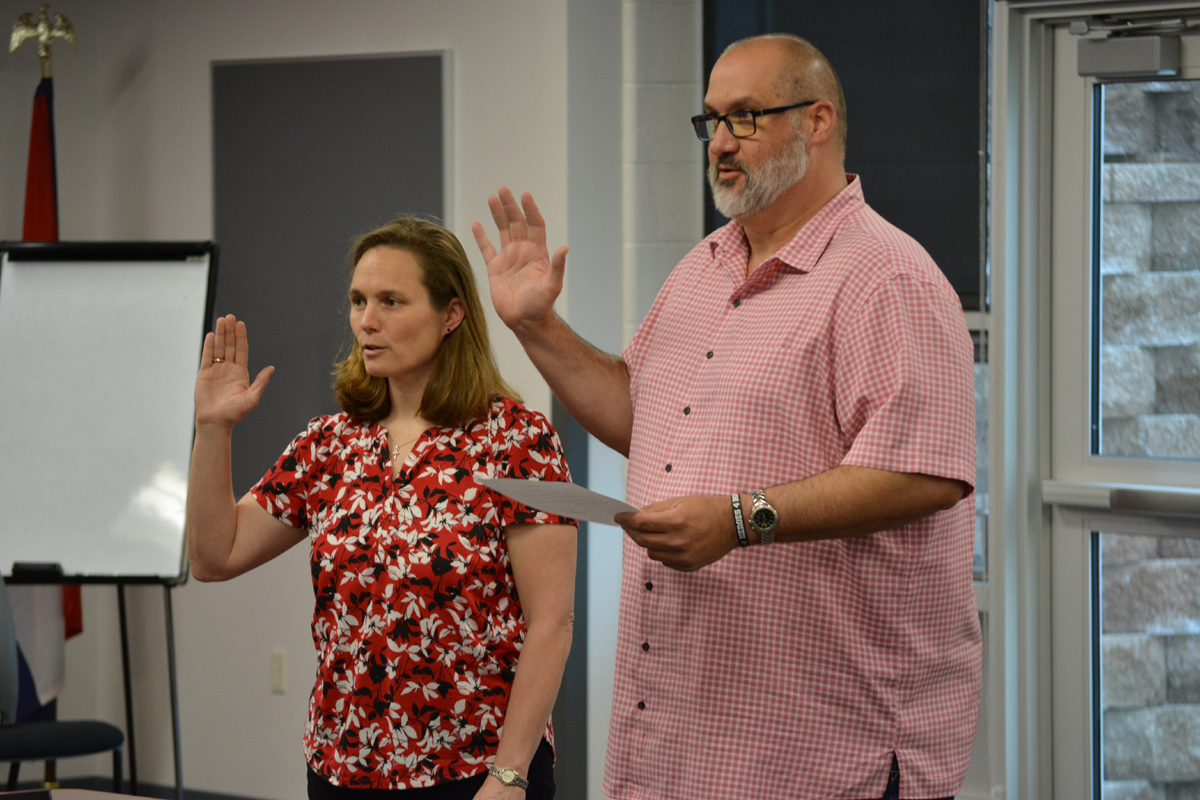 The Jackson R-2 School Board officially accepted the election results from the April 5 municipal election, where Brian Thompson was reelected for his third term on the board and Kristen Lewis was elected to her first term, during its regular meeting on April 12.

Thompson and Lewis took the oath of office during the meeting in the Jackson High School Ignite Center, before the board unanimously reelected Thompson as school board president.

Thompson, who has served as the school board president for the past year, is a pharmacist and owner of Jones Drug Store in Jackson, Twin City Pharmacy in Marble Hill and Chaffee Drug Store in Chaffee.

Lewis, a United States Army veteran and owner of the mobile coffee trailer Molon Latte, said she ran for office to be a conservative values-based voice on the school board.

No additional candidates were nominated for any position on the board.

• The school board approved a right-of-way easement with Citizens Electric Corporation for Citizens to add an electrical pole at North Elementary School.

“The Fruitland area is getting a new sewer upgrade package,” Associate Superintendent Keenan Kinder said. “For that to be operational for one of their service pump stations, they need to run electric across North Elementary on some of our grounds.”

Kinder said district staff has looked at the easement location and believe it will not negatively affect the school’s operations at all and Citizens’ work will be beneficial to the district once completed.

“Once the pump station is going, we can hook North Elementary up to their system instead of the local septic tank/lagoon system we’ve had in the past,” Kinder said.

• The board recognized the transportation department for its 97.2% rating from the Missouri State Highway Patrol bus inspection last month. The school buses transport 3,000 students daily, traveling around 3,100miles each day.

Bus mechanics Brian Timberlake and Chuck Lowes, as well as Transportation Director Carol Woods, spoke to the board about the process of maintaining the school buses and the inspection process.

“All 72 buses run through the shop five times a year,” Timberlake said. In addition to spot repairs, the complete fleet of school buses is inspected before the start of school, over winter break, toward the start of the second semester, the week before inspection and the day of inspection.

“Every single one of those tires has to hold air and have good tread,” Timberlake said of the inspection standards. “The seats can not have any holes in them and the seat bottoms have to be tight, and the mirrors must be free of chips or scratches without any distortion.”

In addition, the buses’ break components, steering components and roughly 50 feet of fuel lines per bus is inspected.

“Down each side of your aisle runner, there’s a metal strip that runs down with screws about every eight inches,” Timberlake said. “Every one of those screws has to be in that floor – that’s how picky the highway patrol is.”

“Those six buses are running routes because there are a lot of other buses we have to keep back for trip buses,” Timberlake said. “Parts are in short supply for a lot of these older buses where you can’t get them anymore.”

Timberlake said the district currently is using parts from three old buses out of use to make sure the 72 running buses can continue to run.

• The board approved a renewal of the district’s Missouri School Boards’ Association membership and full maintenance service agreement. As part of the service agreement, MSBA provides updated policies and procedures to stay up-to-date with changes in state and federal laws. The organization can also advise the district on policy-related topics and provide legal review of district forms. The district pays $3,888 annually for the services.

Lewis asked administrators if the organization represented what the Jackson community wants represented on the statewide level through its policy recommendations and lobbying activity.

Associate Superintendent Jessica Maxwell said some policy changes must be adopted due to legal changes, but the district has not adopted all recommended policies because some were not wanted or needed by the district.

A full-time maintenance and custodial staff are employed to ensure the buildings are maintained and are safe for students, staff and community members. The district currently has five school resource officers and is working with the Jackson Police Department to add a sixth SRO next school year.

The district maintains access controls in all district buildings, more than 450 security cameras throughout the district and outdoor Wi-Fi at all buildings.

Safety improvements planned to be completed by the next school year include the construction of a drop off drive expansion and addition at Orchard Drive Elementary School, the installation of safety glass in the main vestibule and entrances of the middle school, the construction of sidewalks near the bus lane at the high school and improvements to the JHS football stadium bleachers.

District safety teams for each building are created each year and hold monthly meetings. In addition, district staff members and SROs are certified in ALICE Active Shooter Training instruction.

“She is a safe and nonjudgmental presence for students to practice new things and learn new things about themselves where they don’t feel like someone is judging them for trying something new,” Panus said.

A therapy dog is trained to provide comfort for everyone they encounter and are not protected by law like a service dog. Layla’s role at the two elementary schools is to support both students and staff members.

Panus said Layla helps students during tough situations, such as when students are upset leaving their parents in the morning to attend school, when a new student starts attending the school or during various safety drills.

Interacting with animals has been proven to help elevate people’s moods, releasing hormones that can have similar effects as eating chocolate. Panus said the impact can be even greater for children with autism, many of who feel a deep bond with animals.

“She is able to bring down heart rates just with her breathing,” Panus said, adding that interactions with Layla can help lower blood pressure and improve cardiovascular health.

In addition to helping students deal with their emotional needs, Panus uses Layla as a way to teach dog safety to students. Students must ask for permission to pet Layla and they are taught not to run at her from behind.

Panus and Layla take part in continued education events in St. Louis and Layla will be evaluated again in June by Pet Partners to join the Association of Animal-Assisted Intervention Professionals. Panus said membership with AAAIP will provide additional liability insurance and further educational opportunities for her and Layla.

• The board approved the continuation of the Missouri State High School Activities Association cooperative agreement with St. Paul Lutheran School, Immaculate Conception School and Nell Holcomb Junior High School to allow junior high students from those three schools to participate in Jackson sports not offered at their school.