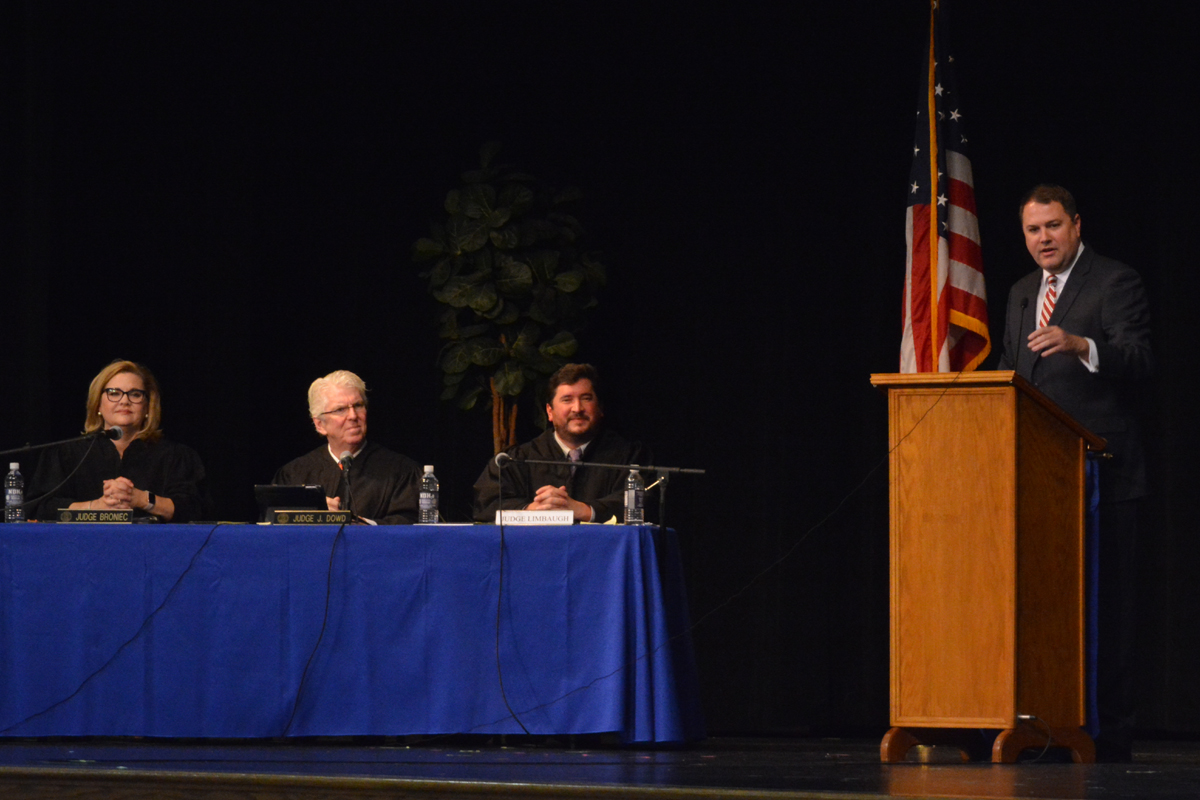 Students at Notre Dame Regional High School were able to get closer look at the legal system, when the Eastern District of the Missouri Court of Appeals held oral arguments on Friday, Oct. 21, at the school.

The court session, which was also open to the public, included arguments from a case appealed from the Ste. Genevieve County circuit court involving a dispute among members of a limited liability company over the selling of agricultural land.

Hearing the appeal were judges James Dowd and Kelly Broniec, as well as Cole County Associate Circuit Judge Christopher Limbaugh. Limbaugh, who previously served as prosecuting attorney for Cape Girardeau County, sat with the court as an appointed special judge.

After oral arguments were heard from attorneys on both sides, a question-and-answer session was held with Chief Judge Michael Gardner moderating.

This was the first time the Court of Appeals were hosted at Notre Dame, though the court regularly conducts hearing at various locations throughout the eastern district – including high schools.

Gardner, who graduated from Notre Dame in 1997, said visits to schools and other locations throughout the eastern district allow the Court of Appeals to educate the public on how the court system is structured.

“I think this is a wonderful opportunity for students and other members of our community to see an appellate court in action,” Gardner said. “So many people are used to seeing shows on TV, which are usually based at the trial court level with a jury. The appellate court, however, is very different in that attorneys come and argue their case to a panel of three judges.”

“We handle a wide variety of cases, whether it’s worker’s compensation, other civil cases, contract cases, criminal cases,” Dowd said. “We have lots of cases and all sorts of law.”

No witnesses or new evidence can be heard at the appellate level, where the judges only review the procedures and decisions in a case. “There will never be any testimony at the court-of-appeals level,” Gardner said. “We are looking at the record that was before the trial court.”

“For the vast majority of cases, the buck stops with our court,” Dowd said. “We are the last place that the case gets to, because most cases don’t go to the Supreme Court.”

The Eastern District of the Missouri Court of Appeals includes 25 counties and the City of St. Louis. It is the state’s largest appellate court, handling approximately 50 percent of the intermediate appellate caseload in Missouri.