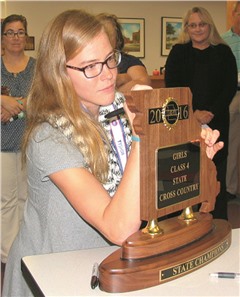 Aaron Harte of Incite Design Studio Architects explained this option for facility usage to the Jackson R-2 Board of Education Nov. 8. This reconfiguration of grades was the option most favored in meetings that Incite Design held with school staff and members of the community. “Option three has the most votes,” summed up Harte. Millersville will probably be the only elementary school that will not be K-4.

The proposal for facilities usage was presented for informational purposes. A draft proposal is expected to be presented to the Board at the Dec. 13 meeting for a vote of approval.

As freshman are moved to the high school, it’s likely that they will be kept separate from the rest of the students, although they will share some of the same facilities. A freshman center will probably be added to the high school. It seems likely that the old “A” building, which is currently not being used, will be either renovated or demolished and replaced with a new structure in its place. Harte was surprised that 66 percent of people surveyed did not think it was important to preserve the old “A” building. He expected greater sentimental attachment to the historical building.

Another 64 percent thought a larger performing arts center at the high school was important. Only 11 percent said no to this addition.

If the Board approves this plan, a bond issue request will be put on the April 2017 ballot.

• State champs honored: The Board recognized the JHS girls cross country team, which won the 2016 state championship for Division 4. In a tradition started last year, the girls signed the back of the trophy.

“Every runner has had something that stood in their path,” Coach Andrea Talley told the Board. “Each has overcome a lot. They had this never-say-die spirit. They were very composed. This was the most relaxed team I’ve ever taken to state.”

• Encore Choice Fridays: A presentation was given on Encore “Choice Fridays” at South Elementary. Students can choose which encore class to attend. They include physical education, library, art and music. Some students demonstrated their projects from these sessions for the Board.

Up for election are the seats currently held by Terri Tomlin, Bruce Thomas and Dr. T. Wayne Lewis. All seats are three-year terms.

• Bids accepted: Contracts were awarded to the lowest bidder for lawn mowing at School District buildings. Kueker’s Lawn Service will mow at the junior high, middle school, Orchard, South and the baseball field area (but not the field itself). Burnett Landscape management will mow West Lane, North, Millersville, Gordonville and East. Clean Cut Lawn Maintenance will mow at the Board offices. (Clean Cut was actually the second lowest bidder but was considered more reliable than the lowest bidder and the difference in cost was just $4).

The Board also awarded a contract for lighting at the baseball field. Barton Electric, Inc. submitted “the best bid that came in,” according to Associate Superintendent Jeff Bollinger. Eight light poles will be installed for a base cost of $164,000. The project will be completed before Feb. 28, 2017, so the field will be ready for night games when the season starts.

R-2 Superintendent Dr. John Link said smaller schools with fewer subgroups can score higher overall than Jackson. However, he was proud of the improvement in the overall score at Jackson. “We challenged our teachers to build relationships with the subgroup kids,” he said. “Kudos to our principals and kudos to our administrators.”

• Busch Stadium Appearance: Link announced that the JHS baseball team will play a game at Busch Stadium in St. Louis on Wednesday, April 19, following the Cardinals-Pirates afternoon game. It was not yet known what high school team the Indians will face.

• Next meeting: The Jackson R-2 Board of Education meets regularly for open session at 7 p.m. on the second Tuesday of each month at 614 E. Adams, Jackson. The next meeting is scheduled for Tuesday, Dec. 13.