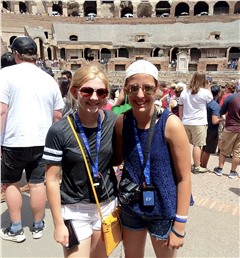 It was a journey of a lifetime from the Bootheel of Missouri to the Italian “Boot.”

He booked through E.F. Educational Tours, a company he had used when he had taught at Fredericktown. This was his first tour since coming to Oak Ridge three years ago.

The group of 10 Oak Ridge students (five juniors, three sophomores and two freshman), accompanied by six adult chaperones, flew out of St. Louis June 18, on their way to Milan, Italy, switching planes in Atlanta, GA. They did not return home until June 27.

In Milan, they met their tour guide, Ione Kerr, who works for the tour company.  She accompanied them the entire time they were in Italy. They boarded a bus and headed for Verona, the city in which Shakespeare’s tragedy, Romeo and Juliet, is based. At one tourist attraction in Verona, the students could stand upon a balcony and recite lines from the balcony scene, or rub the breast of a bronze statue of Juliet to improve their luck at love (or so the tradition goes).
From fair Verona, the group traveled to Venice, where they toured churches, political buildings and enjoyed a gondola ride through the canals of the city. “Some of the kids said this was the neatest part of the trip,” Friese said.

Outside of the City of Florence, the group saw the leaning Tower of Pisa. The next day they went into the city with a local tour guide, who was not hard to understand. “They all speak very good English,” said Friese.

The group split up to see different sights and some visited Michelangelo’s famous statue of David.

The next day, the tour bus headed for Rome. It stopped in a small town in Tuscany called San Gimignano. There, the group witnessed the “Towers of Manhattan.” These are not skyscrapers in New York City, but 13 medieval towers that were built to protect Rome from invaders.

This area is known to have the best ice cream in the world. “This was quite important for me on the trip,” said Friese with a smile. The Italian ice cream, called gelato, was delicious. “It lived up to its billing,” said Friese.

This area of Italy had many rolling hills that were peppered with olive trees. “There were a lot of olive farms in that area,” recalled Friese. “And almost everywhere you see grapes.”

The group spent the first day in Rome touring Vatican City. The next day, they saw other historical sights including the Coliseum and the Forum. They took side trips to various museums.

One particularly interesting stop was Gladiator Boot Camp. “We learned how to fight as a gladiator. It was a hoot. We were put in Roman garb and learned how to handle swords,” Friese recalled.

“It was a very interesting bus ride back,” he continued.  The bus stopped at a fruit stand beside the road. When the merchant learned the tour was from Missouri, he donated a watermelon to them. “There we were, sitting on the side of the road in Italy, eating watermelon.”

In the Naples region, the group visited Sorrento and Pompeii. The City of Pompeii was destroyed when Mount Vesuvius erupted a.d. 79. Volcanic ash and lava trapped many people who were busy going about their daily lives. When this area was later explored by archeologists, the actual people and items had decayed, but the voids they left behind in the hardened lava were filled with plaster-like material to recreate them.

Friese remembers seeing a recreated young child, a pregnant mother, a dog and a lot of pottery. “The city as it is, is like it was,” he said.

After Pompeii, it was on to the Mediterranean coast for a couple hours of swimming. Their stay that night was in a seminary that had been turned into a hotel. “It was a very beautiful area. The bay of the Mediterranean was one side and the mountains were on the other,” Friese noted.

On the second to the last day, the group took a boat tour of Capri Island, “an island where married men should not take their wives,” cautioned Friese. “There were very expensive shops there. Sean Connery [a James Bond actor] used to have a house there.”

The next morning, the group caught a flight back to the U.S.

The boys and girls from Oak Ridge had experienced a cultural shock while in Italy.

“The difference was a shock to some of the kids,” Friese explained. “You get a drink [in Italy] but you don’t get ice. A.C. [Air conditioning] is not prevalent in a lot of these places. We had terrific weather, so A.C. was not an issue. You have to put a card in to turn on the electric in your room. Regarding food, there was a burnout on noodles. Every meal had a lot of pasta. Dinner usually consisted of a salad, pasta, meat and dessert. It would take two hours to eat dinner in a sit-down restaurant.”

Friese was intrigued by the traffic. “They had two-lane roads, but if you can fit four cars side-by-side, they would fit them.”

There was not much time to rest on this trip. “It was rigorous,” Friese said. Some days the activities started at 7 a.m. and lasted until 10:30 p.m.

E.F. Educational tours is in its 51st year of business, and is “geared completely toward the kids,” said Friese. When there is free time, the students always have a chaperone with them as they explore their surroundings.

The cost of the tour was between $4,000 and $5,000 per person, which included their flight, hotels, two meals a day and tickets for attractions. Friese once calculated that the tour cost was about half what it would cost to book such a trip by himself.

The students raised the funds for the trip by various means. Some took part in the Highway 61 garage sale. Others sold some type of soap. Friese doesn’t organize any fundraising events; he leaves that up to the parents of the students who are going on the tour.