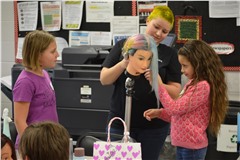 Fourth grade girls at Orchard Drive Elementary celebrated a Girl’s Night In on Thursday, Jan. 24, where they learned about friendship, personal growth and helping others.

Over 20 girls participated in the night in, which is more than two-thirds of the fourth grade girls at the school. Principal Shanna Wilson added that a few of the girls weren’t able to make it due to being sick.

The event was the first of its kind at Orchard, and came out of discussions with the school’s guidance counselor, Jill Hadler. Orchard added third and fourth graders this year, and Wilson said they organized the event to help prepare the fourth graders for middle school.

“I want them to know that there is life outside Orchard Elementary,” Wilson said. “When students leave Orchard, we really try to instill in them the golden rule and that the way you look on the outside does not depict who you are on the inside.”

Right after school, the girls were met with guidance counselors from the middle school who ran ice-breaking games with the fourth graders. Afterward, the girls were split into smaller groups and rotated to different stations ranging from hair care to stress management.

Each of these stations were run by community members that could serve as role models for the participants. Wilson said there are students who may not have adults of the same gender in their lives, and this event gives them a way to form connections with women who are using their unique talents to help their community.

After the girls had gone to each station, they met up for dinner, a presentation on labels and self-esteem by the district’s communication director, Merideth Pobst, and a movie to close the night.

Wilson said they hope to do a similar Boy’s Night Out for the fourth grade boys later this year.