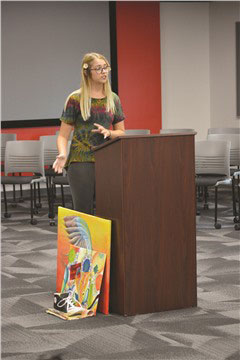 The Jackson R-2 School Board on Aug. 13 approved a $6.5
million lease purchase for renovations at the junior high, as well as a new
administration building if there are enough funds after the junior high project
is bid out.

The junior high renovations will include a new band room
addition to the south of the industrial technology room, and a new
library/media center replacing some of the current courtyard in the center of
the building. Both the library and band room will be significantly larger than
they currently are. A new corridor is also planned on the east side of the
building for access to the new band room.

The current drawings of the project include 10,480 square
feet of new construction, as well as 24,000 square feet of renovation at the
junior high. The current band and choir room will be combined to house a larger
choir room, the counselors’ offices will be moved near the main entrance, the
cafeteria will be expanded, new restrooms will be built and art classrooms will
be moved to where the current library is located.

Superintendent Dr. John Link estimated the junior high
project would cost around $5.1 million, on the high end, leaving enough funds
in the approved lease purchase to build a new administration building for the
District, to be built near Orchard Drive Elementary School.

Link said the current building has run out of offices.
Several people who have offices in hallways are dealing with personnel matters.
“Confidentiality is not really there and we have to do something about it,”
Link said.

At the new location near Orchard, it will be across the
street from the existing support services building and bus parking, making
communication with support services easier for the District. The current design
for the new administration building has 16 offices, a boardroom, a conference
room and a break area.

Link said they chose this location after looking at buying
and renovating the Nazarene church, expanding the current board office and
leasing space from Montgomery Bank. He said every option cost about the same
for the District, and the new construction would allow the District to use the
existing Administration Building for an alternative school.

The 6,500 square foot new Administration Building will have
more space and more parking than the current location, and will leave enough
land for Orchard to continue having physical education classes and play days
outside. Link said the major downside to the location is that the District
doesn’t currently have access to get to the building site without going through
Orchard’s parking lot.

The new building is estimated to cost $1.5 million dollars,
and Link said the reason the cost is so high is because of prevailing wage.
There is also $350,000 already budgeted for administration renovations that
would go to the project. He added that the new construction could primarily be
built by District staff, which would probably bring the costs down.

The vote approving the lease purchase was 6-1, with Board
Member Bruce Thomas voting against the motion. Thomas said he was for the
additions at the junior high but against the new Administration Building.
Several other Board members agreed that the junior high renovations should be
the priority.

Link said it was financially feasible to do the lease
purchase now and would lower the number of projects needed to complete in the
future. “When the time comes that we have to go to the people for a tax
increase, by doing this with our funds right now, it will keep us from having
to increase taxes a whole lot,” Link said.

Link said he expected the District will need to ask for a
tax increase of at least 20 cents in April 2020 or April 2021. “We are at
$3.85, which is so much lower than any other school our size,” Link said. “If
we show them the number of kids and number of classrooms, they will see the
need.”

• The Board revised 25 board policies, ranging from new
guidelines for making sure there are no discriminatory action that makes it
difficult for students to participate in school meals to changing the academic
calendar requirements from referencing number of days to referencing number of
hours.

“A lot of the policy changes are due to legislative changes
– bills that have been passed and require some new pieces of text to be added,”
Assistant Superintendent Dr. Beth Emmendorfer said. She added that there were
no major changes to how the District operates.

Some of the other changes related to the administration of
medications to students. High school freshmen will now be allowed to carry over
the counter drugs like Tylenol at school. Previously this was allowed for 10th
graders and up, but ninth graders were added so the policy was consistent for
all high school students. A policy on student health services was also changed
to allow for school nurses to administer naloxone medication to reverse an
opioid overdose.

Several policies were also updated due to medical marijuana
being legalized on the state level. Because the District receives federal funds
and marijuana is still illegal on a federal level, students and guests are not
allowed to bring medical marijuana on school grounds.

A new policy was added to address the various ways the
District could employ a retired teacher. The policy refers to the retirement
system’s resources, to stay up to date with their changes.

The District also changed its policy to not allow schools to
be used to facilitate visitation during custody disputes among
parents/guardians. Emmendorfer said they have tried to enforce that rule, but
it is useful to have it as an official policy.

• Link told the Board there are 341 new students enrolled
this year. He said some students will more out of the District, but the total
number of students will grow by about 150-200 students. He said they planned
for a growth of 60 students, so this is more than expected.

Several classes at the elementary level are at 25 students,
and school administrators are trying to move some elementary students to less
crowded buildings to make sure class size stays low across the District.

• The Board set a tax rate hearing on Monday, Aug. 26. The
hearing will take place at 6 p.m. at the Ignite Center at Jackson High School.

Martin, who focused on visual arts, was one of 100 high
school students chosen to attend. She explained that the academy includes
interdisciplinary classes, such as one where the visual art students drew the
dancers. The program also included art-specific classes where she made several
pieces to be shown in a gallery. Martin also took electives including a street
art workshop and one where they created hyper-realistic shoes out of cardboard
and paper.

“The academy was a great experience for me to learn and work
very quickly,” Martin said. She said that the demanding work load at the
academy will help her this school year, as she will have to maintain a similar
work speed during AP Studio Art.

• The Jackson Middle School will see the addition of a new
electronic sign. The board approved the $15,149 purchase from Coast to Coast
Signs. The bid includes installing the sign and removing the broken sign. The
sign will resemble the signs at East and West Lane.

• The West Lane FEMA shelter will be inspected on Aug. 27,
closing out the project and will result in the District receiving the last of
the reimbursements from the federal government of around $250,000.