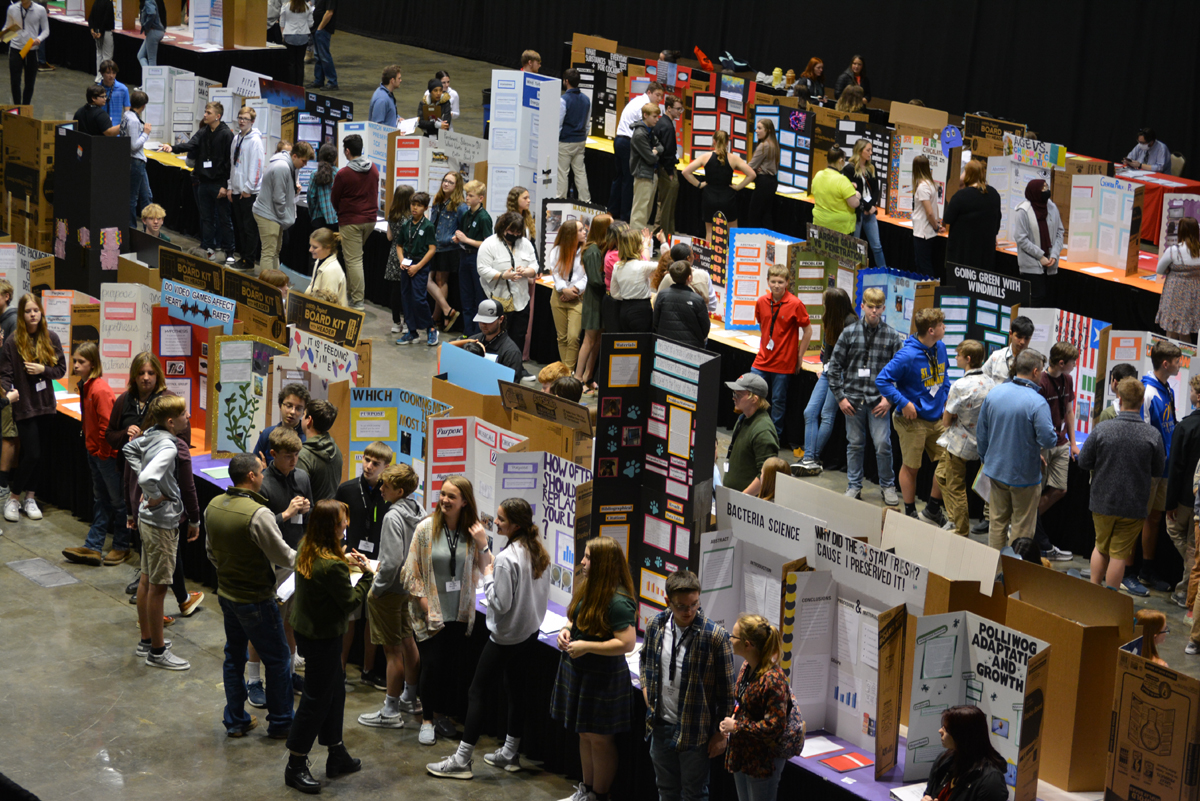 Students had to submit video presentations of their projects last year, without receiving any questions or feedback from judges.

“We are thrilled to be back in person,” Grigery said. “Its much more beneficial for the students able to talk in person about their project and have that interaction with judges. It’s a totally different dynamic than talking into a computer screen.”

First, second and third place awards were given in each scientific category, separated in junior and senior divisions. In addition, over 30 special awards and scholarships were given out at the regional fair.

Parekh, who won the best overall project at the regional science fair in addition to first place in the senior chemistry division, was able to attend the international fair last year virtually.

Though he was still able to see other student’s projects online and participate in Zoom judging at the international level, Parekh said he is excited to go to the physical fair this year.

“I’m excited that it’s in person because I’ll be able to experience the actual fair and everything that comes with it – including getting to meet other finalists, getting to see other student’s projects, talk with the judges and attending all of these panels and events,” Parekh said. “I think the main part of the experience is actually getting to interact with others and learn how to present your research.” 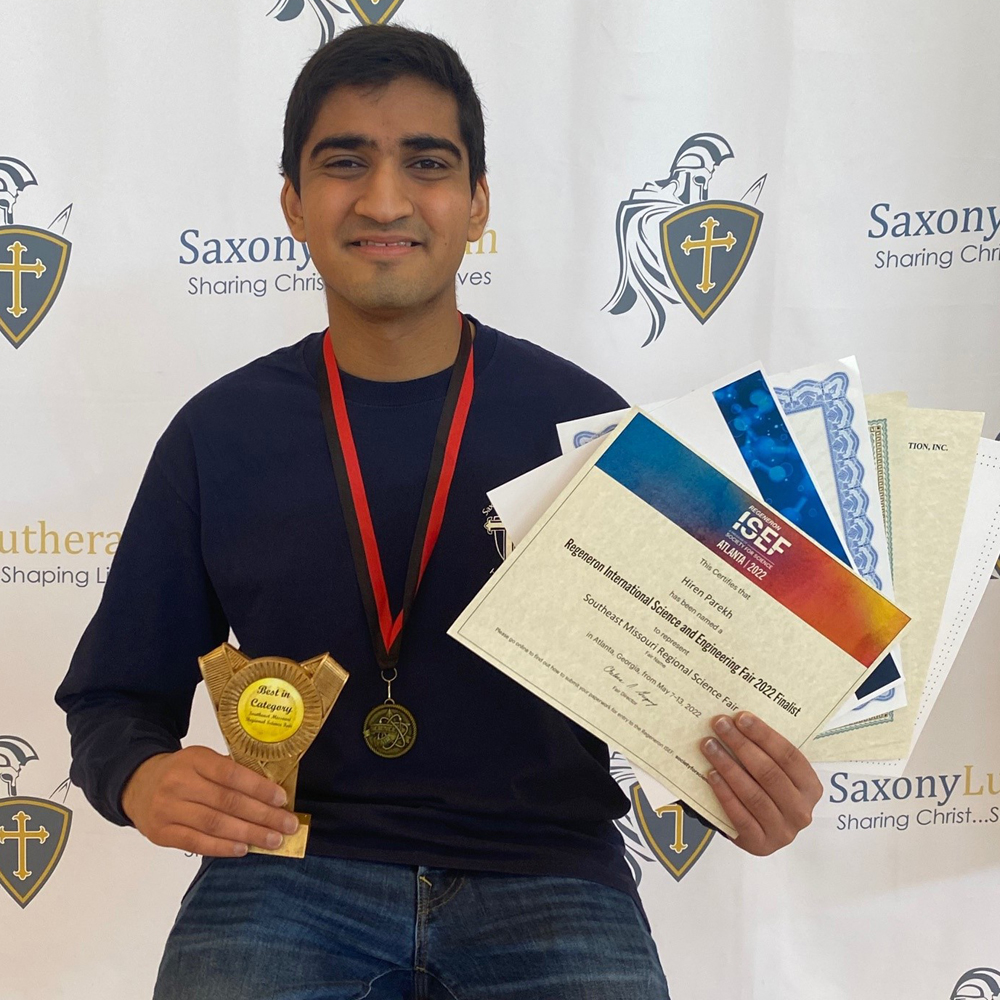 Saxony High School senior Hiren Parekh won the best overall project at the fair and will move on to the international fair in May. Submitted photo

Shields and Luker added that they were excited to attend the international fair for the first time, which will be held from May 7 to 13 in Atlanta, GA. All three students’ travel and lodging expenses to ISEF are covered by the regional science fair.

“It’s really cool to be able to move on and be able to meet people from different countries competing,” Shields said. “I’m really excited and have been working on making sure that my project is ready for the international level.”

Luker added that he is a little nervous but thinks it will be fun to show his project at the international level. “It’s really nice to know that people all around the world are willing to sacrifice their own time to make sure that we’re learning some stuff and we can apply that to what we’re doing right now,” he said.

Parekh’s winning project was a continuation of his work last year of synthesizing the natural molecule Pannokin D in a laboratory setting. The chemistry project could eventually be used to create an anti-cancer drug.

Pannokin D is a natural product discovered in 2014 and has been found by researchers to be a promising treatment for gastric cancer. “It has this unique biochemical property that can enable it to be really potent against certain really powerful cancer cell lines,” Parekh said.

Parekh said the natural product can currently only be obtained from a tree in Southeast Asia and only small quantities of the product can be acquired.

“We need larger quantities to do more research on what other types of cancer it can be effective against and to actually use it as a treatment option in clinical trials.”

Parekh has created a seven-step process made up of different chemical reactions to replicate the molecule and create an affordable and synthetic version that can be replicated on a larger scale. “Essentially, I’m going to take a really simple chemical precursor like a product of crude oil and transform it into something more complex and useful,” he said.

In addition to the theoretical research needed to create the schematic plan, Parekh has also started the experimental phase and has completed the first step of the process in a laboratory setting.

“The schematic is really a dynamic process,” Parekh explained. “I have to oftentimes go back and change a reaction or choose a more efficient reaction to produce the same molecule.”

Parekh added that the molecule he’s synthesizing includes a molecular component that has never been prepared before, but can be found in many other pharmaceutically relevant natural products. “By developing this anti-cancer product, I’m also developing a way to prepare different treatment options for things like HIV, leukemia and the herpes simplex virus.”

Luker, who won first place in the senior biochemistry and microbiology category, tested the use of different bacteria to find an alternative way to break down microplastics in water.

Luker said microplastics have become a problem in oceans, polluting the oceans and causing many aquatic animals to become ill and possibly die. He added that humans can also be harmed by microplastics, with many microplastics overlooked when seafood is prepared.

“Microplastics can get stuck in your digestive tract and can cause you to feel full and start to starve,” Luker said. “If it gets into our food supply, it can cause the food to be deadly to us.”

While enzymes like MHETase and PETase are currently used to remove plastic from bodies of water, the enzymes can be very expensive. Luker said they cost around $7,000 to obtain, whereas bacteria can be purchased for $12 per vial.

“If this bacteria can work as well as the enzymes to destroy the microplastics, then we would be able to produce treatment for microplastics at a much more economically stable level,” Luker said.

Luker used three types of bacteria – Bacillus Cereus, Micrococcus Luteus and Lactococcus Luteus – at different temperatures to see how well they would break down the microplastics over the course of a month.

Luker said further research would be needed to see if it was the bacteria or the enzymes the bacteria created that biodegraded the microplastics.

Shields won first place in the senior Earth and environmental science division for her project testing the effects of fossil-fuel-free laundry detergents on aquatic life.

“Fossil fuels are creating a bigger carbon footprint and are leading to global warming, so that’s why they’re switching over,” Shields said, adding that her project wanted to know that the fossil-free detergents didn’t have any negative effects for aquatic life.

“Right now in the market, they’re selling fuel-free detergents that are supposed to be more environmentally friendly because they are using plant-based material instead of petroleum,” Shields said. “Detergents will run into the water, so I wanted to test if it was not just better for the environment but if it was better for animals as well.”

Shields tested five detergents – three using fossil fuels and two of the newer plant-based options. She used water fleas in water concentrated with the different types of detergent to test the toxicity of the detergents.

She checked on the water fleas after a 24-hour period and a 48-hour period to see how many survived. “They are actually microscopic, so you can’t see them with the naked eyes,” Shields said. “You have to use a microscope to be able to see them.”

Shields found that the mortality rate of the water fleas was lower when using the plant-based detergents compared to the original detergents. “The plant-based were more safe, but not by a lot,” Shields said.

O’Neal’s project focused on if teeth can protect DNA from heat damage. She tested how well DNA could be extracted from teeth, depending on how high of a temperature they were burned.

“I chose this project because I really like true-crime podcasts,” O’Neal said. “It’s definitely something that I wanted to do for fun.”

“Whenever I took the teeth that were heated up 1,100 degrees out of the kiln, they were literally crumbling,” O’Neal said.

Newell used her project to test if cattail plants, an invasive species, could be used as crop fertilizer.

“I was tackling two problems at once,” Newell said. “Cattails are an invasive species that were taking up some of the land on farms, and fertilizer has almost like quadrupled in price. Farmers are struggling with buying that fertilizer, and there’s a lot of mouths to feed in the world.”

The main nutrient in a cattail plant is potassium silicate, which she was able to use to make fertilizer. “In fertilizer, the potassium is what kind of protects the plant on the outside, and it also helps absorb nutrients underground,” Newell said.

Shields, O’Neal and Newell also competed at the Junior Academy of Science and Humanities symposium on March 18 at the University of Missouri in Columbia.

Grigery said that school participation at the regional science fair was down this year, with around half the number of projects submitted compared to pre-COVID years.

“We already have plans mid-year to bring in new teachers and students next year and try to grow this back up again,” she said. “It’s been a very tough past few years and we definitely want to pique interest again.”