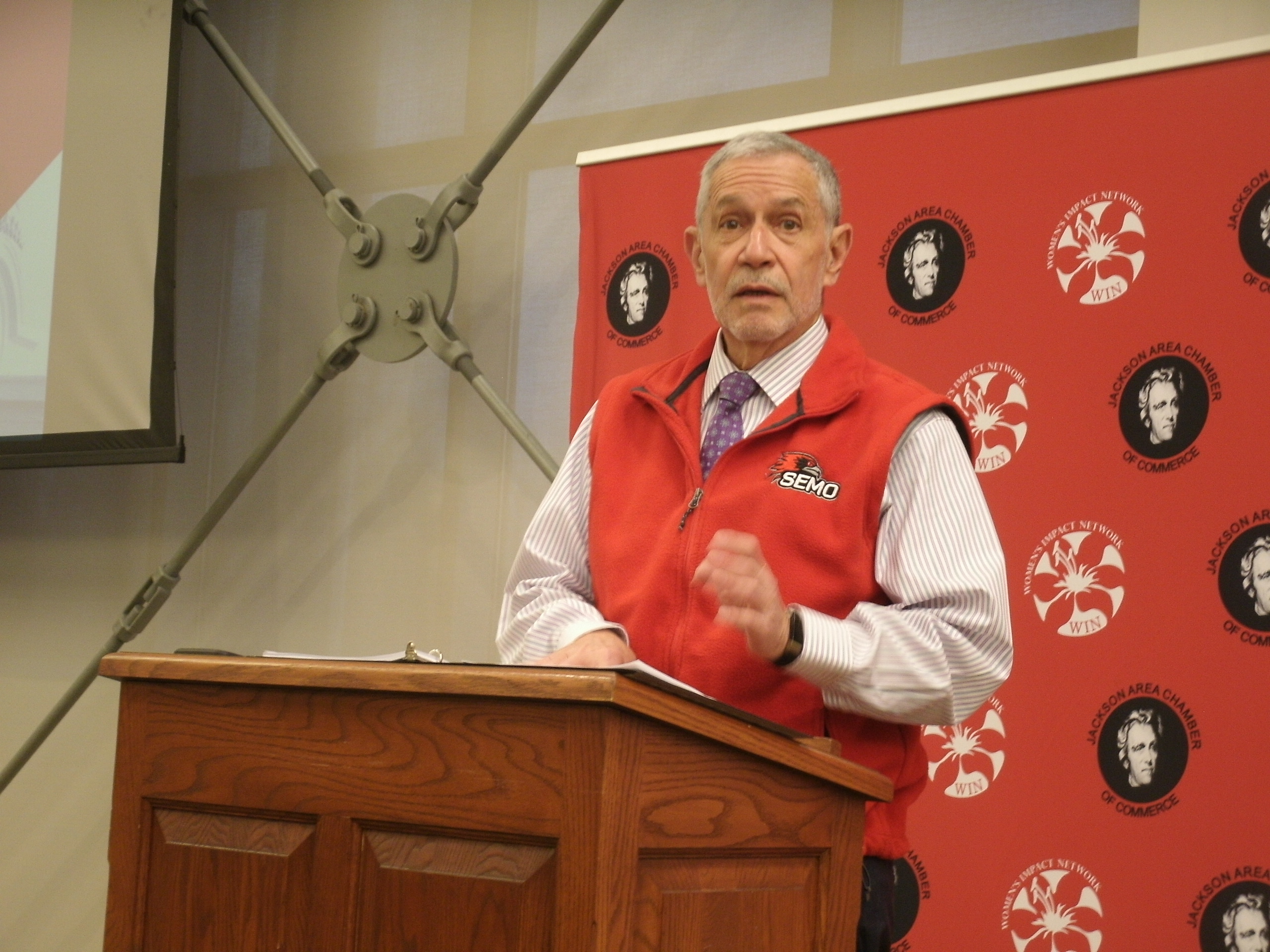 Southeast Missouri State University in Cape Girardeau is one year away from its sesquicentennial — its 150th year. Plans are being made for numerous events during the 2023-24 school year to celebrate the anniversary, including observing another total solar eclipse in April 2024.

“In 1873, Southeast opened with about five faculty members and nearly 60 students,” University President Carlos Vargas told those gathered last month at the Jackson Area Chamber of Commerce Business Leadership Series breakfast in the Jackson Civic Center. “Today, we employ between 1,000 and 1,100 full and part-time faculty and staff, and support approximately 10,000 students from nearly every state and from many countries in the world.”

As expected, most students are from Missouri. Nearly 7,500 students call the Show Me State their home, but almost 700 students come from 65 other countries.

Vargas discussed the economic impact Southeast has on Missouri’s economy.

International students at Southeast add approximately $9 million to Missouri’s economy. “Most of that impact is felt right her in Jackson and Cape Girardeau, and, of course, throughout Mis-souri’s eighth Congressional District. In fact, the Southeast international student population has the second largest economic impact of all higher education institutions located in the eighth Congressional District, and the 10th largest … in the state,” Vargas said.

In the fall 2021 the University partnered with Emsi, an international labor market analytics firm, to study the impact Southeast has on the local economy.

The study was presented to Southeast’s Board of Governors in February. Vargas referred to that study when he spoke March 24 at the Business Leadership Series.

According to the study, Southeast added almost $1 billion to the Missouri economy. “That’s really impressive,” Vargas commented. “We’re also proud of the fact that we generate moretax dollars for the community than we take in. We get tax dollars — that’s our appropriation. But then the University generates more than we take in, so we’re not a sink hole. We’re actually a producer of revenue.”

This year, activities at the River Campus are generating approximately $430,000 in income to the Missouri economy, Vargas reported. “For every dollar of public money invested in the River Campus, tax-payers received $2.50 in return.”

Vargas stressed that academically, Southeast strives to be “relevant and meaningful.” One example was that in fall 2021, Southeast started a bachelor of science professional pilot degree. It was initially thought that five to 10 students would enroll in this expensive program. Instead, 34 enrolled. “It shows that there was interest and willingness of students to get into that program. And, we’re tracking ahead of last year for fall 2022. The excitement and the interest in the program remains,” Vargas said.

In addition, the program has a positive impact on the Cape Girardeau airport. “The FAA provides funding for an airport based on the number of takeoffs and landings of airplanes, so every time a student takes off and lands, that adds a little bit of money.”

Other new programs that have recently been added include two involving cyber-security and one using unmanned drones.

Southeast excels in academics, having more than 30 accredited programs. It also excels in athletics, having won the 2021 OVC Commis-sioner’s Cup for overall best performance in all the sports.

Part of the historic stadium at Houck Field was closed last fall due to structural and safety issues. On Sept. 24, the University Board of Governors approved plans to demolish the south grandstand and replace that structure. Demolition was completed earlier this year.

In its place, the University plans to build a multiuse, multifaceted academic-athletic complex with laboratories and classrooms, along with a new stadium.

Construction of this facility is providing a positive economic impact on our community. “We estimate the total cost to build all phases of the complex will be about $60 million,” Vargas stated.

Following are some additional findings from the Emsi study. The study divided Southeast’s impact into two components: the economic impact and the investment impact. (A video of the economic value of Southeast Missouri State University to the state of Missouri is available at semo.edu/economic.)

The results found SEMO contributes $904 million annually to the Missouri economy, including $14 million spent by students and an alumni workforce that amounted to $770.6 million in added income. Expressed in terms of jobs, Southeast’s impact supported 13,311 jobs annually.

“The results are important because they show Southeast Missouri State is an engine for economic growth in Missouri,” said Vargas. “We are proud to help prepare our region’s workforce. Having data that show Southeast creates a significant positive impact on the business community and generates a return on investment to those who invest in us means we are influencing both the lives of our students as well as the state economy.”

The investment analysis looked at the dollars coming into Southeast by students and taxpayers. The study found Southeast students will receive a stream of higher future earnings that will continue to grow throughout their working lives.

“For every dollar a student invests in their Southeast education,” said Vargas, “they’ll gain $7.50 back in lifetime earnings. In context when you look at that compared to other university impact studies, it’s well above the high mark of $6.50.”

In fact, SEMO students on average have an annual return of 22.8%. That’s double the average 30-year annual return for the stock market.

Taxpayers have a similarly good return on their investment in Southeast. For every dollar of public money invested in Southeast, taxpayers will receive $2.10 over the course of students’ working lives, meaning the University generates more tax dollars than it takes.

“We tell students we are a smart investment, and the study demonstrates this,” said Vargas. “We are proud to contribute value to Missouri, to be a partner to business and economic growth, and most importantly, to help our students achieve the futures they want.”