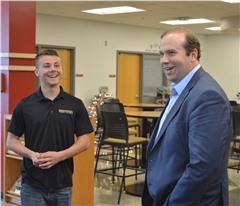 Meinke is Jackson High School’s soccer captain, participates in speech and debate, plays in the band and is part of the Fellowship of Christian Athletes. He also worked as a confidential informant to make sure locations didn’t sell tobacco products to minors.

When Meinke was younger he thought about enlisting after graduation, but as he got older, Meinke dreamed of going to a prestigious college. Going to West Point was the best of both, with the added bonus of having his tuition and other related expenses fully paid.

“It’s perfect,” Meinke said. “It has the military background that I want and is one of the top colleges in the United States.”

Meinke’s father, mother and grandfather served in the military and inspired him to follow in their footsteps. Meinke plans to study Defense and Strategic Studies at West Point, which will allow him to work in counterterrorism and drug opposition when he completes his military service.

Schuchardt is among the top five percent of his class at Notre Dame Regional High School with a 4.36 GPA. He is a member of the National Honor Society and served as captain of the varsity track team. J.P. attended the Naval Academy’s Summer Seminar in 2017 and was immediately impressed by the midshipmen in the class.

“The Naval Academy has been a dream of mine since I first learned about service academies during my freshman year,” Schuchardt said. “I feel honored to join this group of outstanding midshipmen and represent Missouri at the U.S. Naval Academy.”

Applicants to service academies must meet the academies rigorous academic standards. Additionally, the student must receive either a Presidential or Congressional nomination to be formally appointed and accepted by the academy. Both Meinke and Schuchardt received their nominations from Congressman Jason Smith, who visited both of them earlier this month.

Smith said it is one of his greatest honors to nominate students from his district and help them excel in the country’s finest academic and military institutions.

“Only the most outstanding and dedicated young men and women are admitted to these institutions,” Smith said. “These young adults selected from our area have worked hard and earned a coveted spot at our nation’s service academies. They stand out among the best and brightest, and I’m proud they’re going to represent our state.”