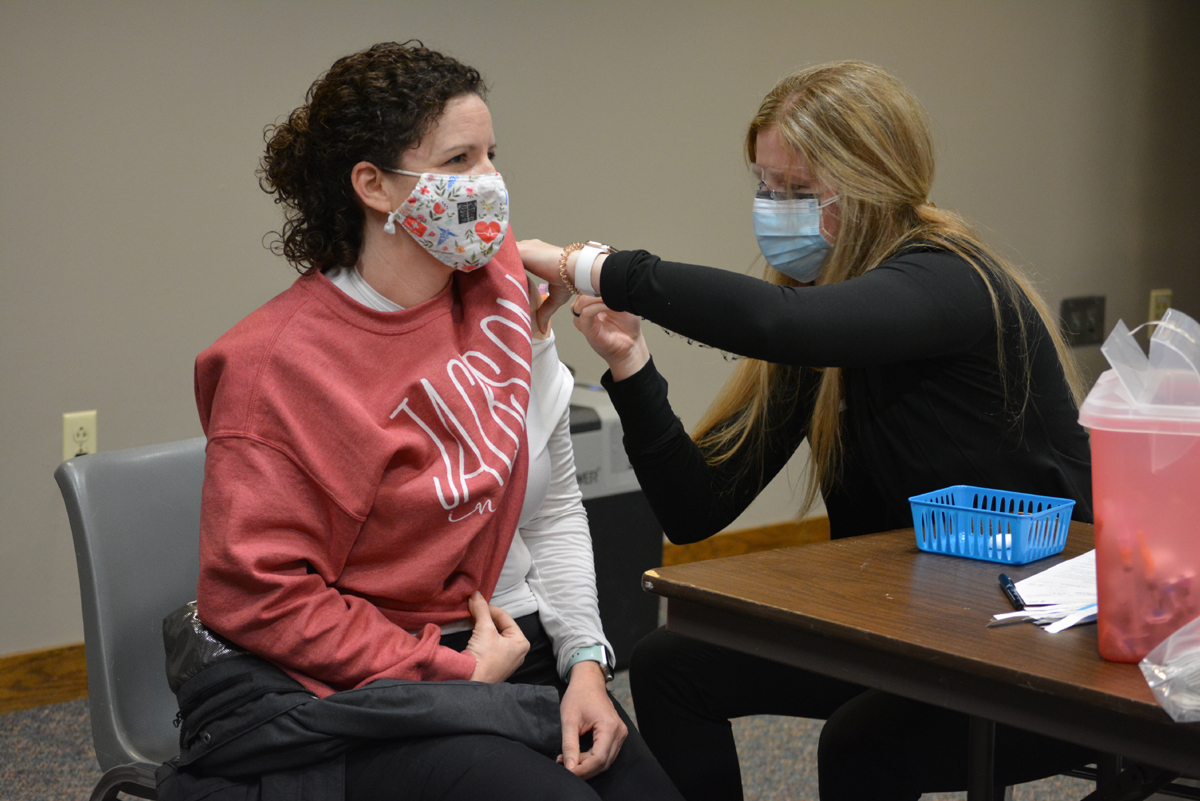 COVID-19 vaccinations were just becoming available as 2021 began. Some of the first doses went to healthcare workers. West Lane Elementary School nurse Morgan Loesel, left, receives her first dose of the vaccine on Jan. 8 at the Show Me Center. Photo by Jay Forness.

As the year 2021 dawned a year ago, Jackson, the State of Missouri, the nation and the whole world found itself mired in the middle of the COVID-19 pandemic.

There were some signs that things would get back to normal as the year began, but it has been a year of struggle.

We’ll look back over the events of this year as reported in The Cash-Book Journal.

A year ago, Missouri was just receiving and distributing its first COVID-19 vaccines. Gov. Mike Parson announced Dec. 30, 2020, that “Missouri has now received shipments of both the Pfizer and Moderna vaccine, and we have been successfully administering vaccines for more than two weeks.”

During the first week of January, local healthcare workers received their first doses of the vaccines at the Show Me Center.

The Jackson R-2 Board of Education approved the change from an 11.0 grading scale to a 4.0 scale at the Jan. 12 meeting.

On Wednesday, Jan. 20, a car accidentally crashed through the front window of Jones Drug Store. Amazingly, no one was hurt.

A ground-breaking ceremony was held Wednesday, Feb. 3, for a new fire station in Millersville.

Jackson High School held its annual Ye Olde Madrigal Feaste Feb. 12-14 after it was postponed because of COVID-19. The Thursday performance was postponed to the following Sunday because of bad weather.

The Madrigal Feaste ended one day before a big snowfall brought the area to a virtual halt. The City declared a snow emergency at 8 p.m. Sunday night, Feb. 14, giving residents 24 hours to remove their vehicles from snow emergency routes. Snow fell beginning Monday morning and accumulated to somewhere between 7 inches and a foot. High winds created blizzard conditions at times and blew snow into deep drifts in some areas. The snow emergency lasted until 2 p.m. Thursday when bright sunshine began melting the snow.

On March 1, Jen Berti announced to the Jackson Board of Aldermen that NAVI Retail had been retained to do a market analysis on what business development is needed at Center Junction after construction of the Diverging Diamond Interchange is completed.

The Jackson Area Chamber of Commerce held its annual banquet March 3 at Rock ’N’ Roll Drive-In in Chaffee. A program was projected on the movie screen as attendees remained socially distant in their cars. Kenny Loos received the R.A. Fulenwider Community Service Award.

Cape County had been under a mask mandate since July 2020. On March 8, the Cape Girardeau County Public Health Center Board of Trustees rescinded the mandate.

That same day, U.S. Sen. Roy Blunt announced that he would not run for reelection.

On March 15, the Jackson Mayor and Board of Aldermen gave a head nod to proceed with Jackson in Bloom and Homecomers for 2021. Both events had been cancelled the previous year.

On March 19, Gov. Parson announced that the deadline for filing income taxes would be extended from April 15 to May 17 to give additional relief to taxpayers and tax professionals as the state continued to recover from the COVID-19 pandemic.

After canceling the event in 2020, the Uptown Jackson merchants were excited to plan their spring open house March 20.

Cape County announced it now had the capability for residents to text 911 dispatchers with emergency information, it was reported March 17.

Life was slowly returning to normal in Jackson and the surrounding area.