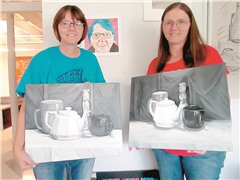 Since they were kids, Rhonda Johnson and Vickie Bollinger — twins who still reside in Jackson — both spent their time making art. But they never thought the opportunity to go to college and study more about their favorite subject would ever happen. “We could not go to college due to not having any money,” said Bollinger.

Before getting married, Vickie Sue Smith and Rhonda Lue Smith attended Jackson High School from 1977 to 1980 and received a lot of support from their art teachers, Wanda Young and Herb Wickham.

“In high school Ms. Young thought I could do anything. She’d meet us before school … at lunch,” said Bollinger.  “She signed me out of study hall so I could work on my art,” said Johnson. “I was so thankful.”

After high school, the two artists never stopped creating. “It’s like you gotta have that feeling,” said Johnson.
“It must be the endorphins,” added Bollinger.

As they were growing up and received encouragement from teachers, their mom kept telling them they couldn’t make a living as artists. “It was our dad who believed in us,” said Johnson. “He would say someday I’m gonna see your pictures hanging up for sale.”

At 12 years old, they baby-sat around the neighborhood, at First Baptist Church, and for P&G employees to pay for art supplies. Later, at about age 15, they began face painting. Together they have 80 years of experience.

When their dad, Melvin Lee Smith, died in 1983 their dream of becoming artists kind of died too. “For a while after my dad died I didn’t do any art,” said Bollinger. Johnson didn’t quit making art but, “I didn’t get to do as much because I had to work and help my mom out.”

The Unveiling is a painting by Johnson that represents the twin sisters’ past that they wish they could have back.

“It is about our home,” said Johnson. “We used to work on the ’52 Chevy with our dad and those were good times.”

Bollinger said, “My mom managed to tuck us in at night and call us angels. We love our mom more than she knows.”

It wasn’t long before they were back drawing and painting and contributing time as volunteer artists in the community and in Jackson churches and schools their children were enjoying just as they did.

As a mural artist, Johnson shared her talents to encourage reading and history at North Elementary School. Johnson’s murals spread to Jackson City Park’s Playground at the old swimming pool; rainbow murals and other spiritually uplifting images surfaced at New Mc-Kendree Church and beyond.

In 1994 the Arts Council of Southeast Missouri held a contest calling artists to design a mural for the brick wall on Main Street, across from Barton Street in Jackson. Johnson said, “This was the wake-up call when we started believing in ourselves again.”

Bollinger saw the announcement in the newspaper and went to the background meeting that gave specifics on the requirements. “We were gonna try because everybody was encouraging us,” said Vickie. Both sisters submitted entries and Bollinger received an honorable mention for her design.

The length of the size of the entries was around 36 inches, making storage while working on the piece, an issue.

“I lived in a trailer at the time. I stored it on top of the couch while I was working on it,” said Bollinger. For her, creating an entry represented that piece of her that had seemed lost. For 21 years she had stayed home, raising six children and helping her husband, Steve, with his business, Golden Rule Construction.

Johnson raised two children while working in the Jackson School District and other businesses in town.

While the two share a love for art, it seems as if they each excel at different things. Johnson said, “What I can’t do, she can.”

And there is a special non-verbal communication they share as twins. They don’t have to rely on calling or texting … they just show up when the other is needed. “Lots of times we show up wearing the same thing,” said Johnson.

A lot has changed in a little over two decades and for this semester, the two sisters have a studio space they share at Catapult Creative House.

“I still can’t believe we get to share it,” said Bollinger.

CCH, located at 612 Broadway, Cape Girardeau, is an art gallery where Southeast Missouri State University students lead and/or participate in the creation, development and sales of creative and innovative products and services in a student operated environment. Upstairs at CCH, there are limited studio spaces available for students meeting requirements. For this arrangement a contract is agreed upon.

“These spots are limited and you have to prove to the professors and proprietors that you will create and sell artwork and promote Catapult. You have to set up and sell pieces at the pop up shops they have periodically and sell for the others in your group also. It all takes work but we love artwork of any kind. I love this opportunity and thank them for allowing me in this studio. Also, you have to be an art major with good grades,” said Johnson.

Bollinger wants to become an art teacher to help people. It links back to all the people who have helped her along the way but also to her baby that died and she could not help. She remembered her baby crying. With carefully chosen words she said, “I never got to finish.”

As for Johnson, she has illustrated a book on manners, written by Carletha Rosy. “We are trying to get it published on Amazon,” she said. There is a second book in the works on talents. Johnson’s pseudonym is Aunt Sissy.

The journey of taking classes to become an art teacher for Bollinger and a children’s book illustrator for Johnson began in 2014 when they were both 52.

“When we got started I was just minding my own business at home. I had no job and Vickie came over and said let’s go up to SEMO to see what they have to offer,” said Johnson.

Johnson said, “Did you hit your head? We’re too old.” Bollinger replied, “At least come with me.”

As they walked up the steps to Academic Hall, the two agreed it felt just right and once inside, they turned and said it out loud at the same time.

The idea to visit campus began on a Wednesday night when Bollinger shared her desire to be an art teacher with her pastor. “Everyone prayed over me,” said Bollinger. Later, at home she watched a Christian program.

“An African American pastor on the show looked directly at me and said, someone is going to cross your path this week and is going to help you,” said Bollinger.

By Friday a substitute teacher Bollinger met while volunteering in Janienne Moore’s classroom at Jackson Junior High School helped Bollinger set up an appointment to tour the campus.

The journey—financial and otherwise— has been paved with obstacles since Bollinger and Johnson began attending Southeast Missouri State University.

“The whole time we’ve been at school, members of our family have died or been diagnosed with cancer and other serious illnesses,” said Bollinger.

Their funding has been a combination of Pell grants, loans, scholarships, work study and paying out of pocket.

“I thought I would die just getting through,” said Johnson, about the first semester. But an incident in the second semester was like a nightmare.

“We had been walking from Academic Hall and decided to sit down on a bench. I was carrying two sculptures,” she said.

Tripping on some uneven concrete caused her to sail into the middle of the street, fracturing a knuckle on her right hand while pulling a tendon up in her arm. The result was a splint cast and two months of physical therapy.

“I was only in class two weeks!” she said. “My teachers gave me an extension but I had to draw with my left hand.”

Needless to say, the two sculptures she was carrying, made of wire and plaster, had to be redone. “We tried re-gluing them but that didn’t work,” said Bollinger.

A self-portrait on brown paper, the result of an image of herself done on a three dimensional printer, was produced by Bollinger during the time of her injury. “We were supposed to look at the image, draw ourselves and change it,” said Johnson.

The terra cotta colored crayon she used represents a Cherokee background. In her mind’s image she wears a baseball cap, so she drew that. “Then my favorite thing started evolving — fishing,” she said.

Along with her three sisters, camping and fishing were done in all kinds of weather. So the drawing is like a walk down memory lane.

Sharing studio space with her twin is like, “A dream come true,” for Bollinger.

Johnson said, “In our lives we are so busy and having any time to do art together excites us and refuels our lifelong love for creativity. The only way I can explain is when she is close by the energy level increase and the mood to create is something powerful. When she is not there I’m sad. We can ask each other what the other thinks about the piece we are working on and we are honest with each other. She helps me figure out what’s wrong or lacking and vice versa, I help her. It always feels like the missing piece of the puzzle is found. It’s great!”