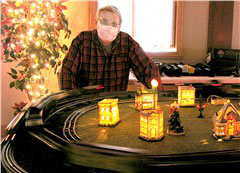 Christmas and electric trains go together like, well, sledding and hot cocoa.

Last Friday and Saturday, model train enthusiast Arnold Kistner displayed seven of his model trains in Christmas settings at Wesley United Methodist Church in Fruitland. The display was open to the public; a donation of a canned food item for the Jackson Food Bank was the suggested admission price.

In the subdued lighting of the trains themselves, Christmas lights and illuminated miniature buildings and signs, visitors watched the trains roar around their tracks, blowing their whistles and (in the case of one locomotive) wisps of smoke.

Kistner collects, repairs and sells model trains. His Fruitland home is practically a model train museum. His trains come in all shapes and sizes, from small HO tabletop displays to large “G Scale” trains that he sometimes sets up outside on his lawn, to one large train that rides on permanent steel tracks in his yard and is large enough to sit in and give rides.

On display at the church were seven model trains of various ages, valued at $8,000-$10,000, Kistner said. The oldest train on display was made in 1920 or earlier. Several were from the 1950s. One came from Germany. A train from the 1990s was battery-operated instead of using AC current.

The trains had working lights; some of them blew their whistles and one blew smoke, which came from a special pellet placed inside the locomotive.

In addition to the trains themselves were several lighted buildings, railroad crossing signs, Christmas trees and more. The smaller trains were placed on a table; larger ones we set up on the floor. Kistner said it took him six-and-a-half hours to set up this display.

This is the first time he has displayed his trains at the church. In the past, he has shown them at the Altenburg Museum, the Lutheran Home, Jackson Senior Center and Purcell Tire.

Kistner said he has been “working on this stuff” for about 40 years. He enjoys repairing and fixing the trains.

In 1976, Kistner set up a train display in a store window in honor of the nation’s bicentennial.

When he is not working on trains, he has a business repairing antique radios. He also makes Christmas ornaments which were on display and sold for a small fee.

One of the first visitors to the display on Friday was 2-year-old David Sweeney and his grandmother, Linda Cook. Cook said David’s father makes railroad ties at his job in Scott City.