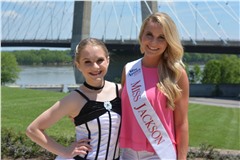 Aimee Stockard and her younger sister, Lilly Stockard, have tried to help the community they call home as they hold pageant titles and prepare for competitions this summer.

Aimee, the current Miss Jackson, is off to compete at the Miss Missouri competition June 13-16 in Mexico, Missouri. If she wins, she will move on to the national Miss America competition.

Aimee said she started doing local pageants, but she has competed in competitions run by the Miss America organization for the last three years. She has won three titles, including Miss Jesse James, Miss Heart of St. Louis and Miss Jackson.

“During this year, I have gone all over the state, and I’ve been able to represent my title and my platform,” Aimee said.

The Miss America organization’s national platform is Children’s Miracle Network, but each contestant can pick a personal platform as well. As a suicide survivor, Aimee chose suicide awareness and prevention as her platform.

“During high school, I lost four friends due to suicide, but during this time no one would speak about it until it was too late — until they saw them in the casket or heard that someone committed suicide,” Aimee said. “It weighed heavy on my heart, but I didn’t quite understand until I went through a really rough time and contemplated life and death.”

Aimee said suicide is the second leading cause of death for adolescents, and it wasn’t until a friend reached out that she became a believer in God and was able to see things in a different way.

As Miss Jackson, she created a school tour called Saving the World One Rockstar at a Time, where she talked to area students about suicide prevention skills. She has also visited nursing homes, participated in the Jackson Christmas Parade and volunteered with numerous local organizations.

Lilly Stockard has followed in her sister’s footsteps, having won a title of her own and volunteering alongside her sister.

“[Aimee] started doing pageants, and I could see that she was making a lot of friends and enjoying it, so I decided that I wanted to do it as well,” Lilly said.

In February, Lilly participated in the Miss Heartland Preteen Princess of America competition, where she competed with girls from across the state.

“Since I won the state competition, I advance to nationals this July in Branson,” Lilly said. “You basically do all the competition you do at state, but you compete against other state winners for the national title.”

Aimee said that it’s incredible to share these experiences with her younger sister and joked that they share a wardrobe.

“She might be half my age, but because she’s pretty much my size, we just switch outfits back and forth,” Aimee said.

Both sisters spoke about how they prepare for competitions, saying it takes a lot more work than people realize. Aimee said her talent is an acrobatic tap dance to Elvis Presley’s “Blue Suede Shoes,” and she has to stay active to be able to perform.

“You have to have a healthy lifestyle and balance your life with this to be able to shine on stage and be the best person that you can be,” Aimee said.

Aimee added that while the fake eyelashes and teeth that can be seen on shows like “Toddlers & Tiaras” are a part of the pageant world, it’s hard work that makes contestants stand out.

“It’s not about being the prettiest one or the most fit one,” Aimee said “It’s about who you can be personally and what you can do to make a difference.”