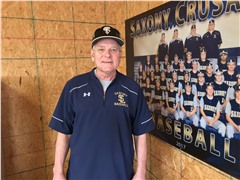 Hometown Pride features a person each week who helps make the community better.

Paul Sander has been the Saxony Lutheran baseball team’s head coach since 2007. During his time, the Crusaders have compiled an overall record 159-88-1 with one district championship. Before coaching Saxony, Sander served as Jackson’s mayor for 14 years.

It has changed a lot. When I was a kid the city limits ended at Shawnee Drive going toward Cape on East Jackson Boulevard. That was the end of the city limits, and it was a two-lane highway. Going out to the west right past the City Park was the city limit. To the north was right by Wib’s drive-in. To the south it was just about right at the top of the hill past Country Mart, so it was a pretty compact little town of 4,000 or 5,000 people when I was a kid.

We experienced tremendous growth, and we’re experiencing it again now with Mayor [Dwain] Hahs. When I was mayor for 14 years, Jackson was the ninth-fastest growing city in the state during my time percentage wise. I always felt like if you aren’t growing you are going backwards, and most people agree with that.

When I was a kid, my dad owned a business, and he was also in politics as county commissioner. He had a business uptown, so I grew up going there after school and knew all of the business people. I would bug the hell out of them, going in and out of buildings.

All those businesses Uptown — I could tell you what every one of them was. They were mom and pop small-town businesses, and that’s gone. If anything hurts me about what has happened to Jackson, the mom and pop businesses — probably 80 percent of them — are gone. I think the only one left uptown that was there when I was a kid is Jones Drug.

You see more craft shops now, you see more restaurants, and that’s great, but what you don’t see in Uptown Jackson and a lot of towns are where you can buy your clothes, groceries and just about anything you needed to live. You can’t get that anymore.

Growing up in Jackson, it was a quieter time. It was a time where I grew up by the City Park. When I got up in the morning as a kid, I wanted to do two things: go to the pool and play baseball in the park.

You go on your bikes and you went all over town and mom and dad knew you were going to be back at noon or five to eat, and nobody worried about it.

What was it like being the mayor of Jackson?

A few folks in town asked me to run for city council, so I served seven years on the council before I ran for mayor.

There just came a time where a group of folks and myself felt like the timing was right to do something different, and I was successful. I stayed for 14 years, which may have been too long. I think anybody can stay too long and get too comfortable in positions.

I’m very proud of what we did in the city, but my wife would say I stayed too long. She is not one to ever like the political world, and she has been tremendously happy since I’ve been out of it.

What made you want to be a baseball coach?

Baseball has always been my passion. That’s what I like. I’ve had jobs, and now I run an international worker exchange program to make my living, and I like that stuff, but I love baseball. I have since I was little, and the field that is named after my dad in the park was one of the two fields in the City Park at that time.

Shortly after that, the men’s softball field was built in the 1960s, and then all of the other parks came later.

When I was leaving public office and did not run for re-election in 2007, I got a call from Saxony. They were looking for a new coach.

I first told them no. I didn’t really want to get involved in what I see going on in some schools today, with the behavior and some of the other issues — not just in Jackson, but everywhere.

They called me back and said, “Come back and see us.” They said, “Try this for a year. If you don’t like it no hard feelings.” I’ve never done anything in my life that I enjoy everyday like I enjoy coaching baseball up here at Saxony. It’s not only a pleasure, but it’s my passion. I could’ve retired a long time ago, but I still enjoy it, and I can still do it. It’s what I like to do is be at the ballpark.

My background before I got here was coaching youth leagues. I coached all the way from little tee ball kids up through little league then I had a Senior Babe Ruth team that won a state championship in 2010 of 16 and 18-year-old kids.

I’ve always liked coaching all ages, but the high school kids are what I like the best. The last five years I have gotten involved with being the manager of the [Charleston] RiverDogs semipro team. I’m taking a step back from that this year.

A lot of young coaches ask me what I would not do with my son since I’ve coached my sons and been around kids all of your life. I said there’s only one thing I wouldn’t do. Don’t take the baseball game to the dinner table. It’s real easy for you, if you have a son playing, to get to the dinner table and get the focus off the day and get it on baseball and sometimes end up in an argument. Leave it at the field.