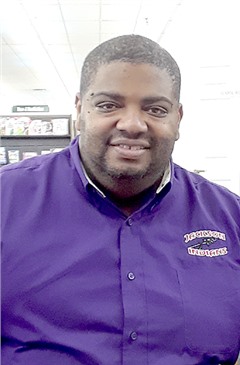 “I like how they do things around here,” he said. “Veteran’s Day, Memorial Day and band festivals; I like going to them. Jackson has a lot of good events.”

Jordan interacts with folks in the community wherever he is. He is just a friendly person.

“I’ve gotten to know and meet people through different events, and that’s what I like. This is my town and my community.”

Among some of the churches Jordan has preached at are First Presbyterian Church, Emanuel United Church of Christ and Shawnee Hills Baptist Church.

Jordan, a member of New McKendree United Methodist Church, spends a lot of time as a volunteer at the YFi Youth Group there. And although he has family in Cape Girardeau, St. Louis, Mississippi and Tennessee, he regards the New McKendree congregation as family — his church family.

Jordan’s connection with youth does not end there though. He works at the Jackson R-2 School District as a security officer and door greeter. “I love my students. I like keeping the students and staff safe. If students have problems, I want to be there for them. If bullying occurs or if students are just needing to talk, I want to be there for them. Sometimes I just get them to the principal or counselor.”

“My goal is to give a student a high five, tell them to have a good day, stuff like that. Some are just shy. I want to help them to feel at ease. Sometimes all it takes is five minutes to talk or just listen. I eat lunch with the students, and the ones I don’t know I get to know.”

Jordan also enjoys the company of adults as well. Some of the organizations he belongs to include the NRA Committee, the Republican Central Committee; he is president of the SEMO Pachyderm Club. “I like to build relationships and friendships,” he said.

Being around people is just part of his identity. Just this year Jordan became a volunteer at St. Louis Iron Mountain & Southern Railway. “I played Frosty the Snowman three to four times a week and some Sundays after church. I plan on doing it again next year.”

Some of Jordan’s most favorite things about Jackson are that people treat you like family. “It’s nothing for people to just come up and give you a hug.”

Two years ago when he experienced a major diabetic incident, Jordan discovered just how far people in the community would go to help him get the help he needed and to check on him afterwards. When Jordan was not answering his phone, caring folks in the community got concerned and Jackson Police Department as well as the Cape County Sheriff’s Office got involved. After pinging his phone and locating him, Jordan said the Cape County Sheriff’s department escorted him to Southeast Hospital where he received care.

“They even called my mom to tell her I was sick and stayed with me in ICU till she could come. For a couple of weeks the police, sheriff and pastors from lots of churches came to see me or called or sent cards. It really touched my heart,” he said.

Jordan is working on turning strangers into friends. He said, “All the people I don’t know are the ones I want to get to know.”