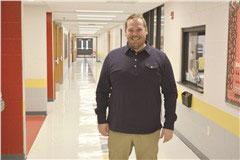 Dr. Lance McClard, the principal at North Elementary, has lived in Jackson most of his life. He graduated from Jackson High School and said he and the city have both grown a lot since that time.

“I think people are shocked sometimes when they find out that I’m a principal,” McClard said. “They knew me from high school and say, ‘weren’t you often sent to the principal’s office?’”

But being in education was something he was always meant to do, with many of his family members being fellow teachers. McClard moved to Jackson with his family when he was in the ninth grade when his father, Rick McClard, became the assistant principal at Jackson High School. McClard’s wife, Laura, works as a counselor at Cape Central High School and will be working at Jackson next year. Laura’s mother, Leta Wagoner also worked as a teacher at Alma Schrader in Cape Girardeau Public Schools.

McClard said that despite having family in education, he didn’t think about being a teacher himself until midway through college at Southeast Missouri State University.

“I started with a pre-med major, and I went through the courses but didn’t really enjoy them,” he said. “I started looking back at the experiences where I actually enjoyed what I was doing, and it always sort of circled back to teaching others and working with kids.”

While in high school, he volunteered with the Jackson Optimist Little League Wrestling and was a lifeguard. “I actually enjoyed working with the little kids during swim lessons — other than the cold water in the morning,” McClard said.

After graduating college with a B.S. in education, he started his career in South Carolina, where Laura attended graduate school. McClard said they “gravitated back home” after living in South Carolina for a few years. “What’s great about Jackson is that usually if you graduate from here, you want to come back.”

During this time, McClard went back to Southeast to receive his masters and specialist, as well as recieving a doctoral degree from the University of Missouri.

At North Elementary, McClard said one of the joys of his job is being able to see the kids grow over the years. “It’s nice being in a building that’s K-4, where most of the time the kids that are with us in kindergarten are with us in fourth grade,” he said.

McClard added that due to North Elementary’s relatively small size, the whole school is able to start each day together in the gym. As a school, they say the “Pledge of the Allegiance,” the North Student Pledge, go over announcements and have a quiet ‘mindful’ minute. “They just kind of sit quietly and think about what their goal for the day and how they’re going to accomplish it,” McClard said. “Sometimes we will do breathing exercises or different things, just to get ready.” McClard also highlights students who have received positive office referrals and are having a birthday.

Once students are in their classroom, McClard tries to visit each class “just to say good morning or just to walk through to see how they’re doing.” He said that he spends more time in classes than is typically thought of principals, but it helps him give quick feedback to teachers and helps him get to know students before issues reach his office.

“I think a lot of times people think the principal ought to be in the office because of discipline, but what we’ve found is if I’m out in the classrooms more, you get to handle it earlier,” McClard said. “Having those conversations with kids on the fly has really helped.”

He also said he makes time to work with students directly. “There have been times where I’ve been able to start a club over lunch because a kids wants to do a mystery Skype club,” McClard said. “Rather than always asking teachers, although I do ask a lot of teachers and they are fabulous, there are times where I step up. I was a teacher once, and I can help out and still teach kids even though I’m in a principal role.”

The most difficult part of the job is to keep up with paperwork and email. “I try to schedule a time somewhere in the day when I sit down and check emails,” McClard said. “Now that we’re mobile and we have phones, you can kind of keep up with that stuff in the classroom, but at the same time, you don’t want to be on your phone checking emails while you’re in the classroom.”

McClard is also part of the ConnectEd Learning team, a non-profit organization in St. Louis that helps offer affordable professional development opportunities for educators in the area. McClard said their biggest event, EdCampSTL, will happen at on Feb. 9. “We have 700 teachers signing up for learning on a Saturday,” he said.

McClard was recently recognized as the 2019 National Association of Elementary School Principals (NAESP) National Distinguished Principal from Missouri, and he joined more than 50 other elementary and middle school principals in Washington D.C. in October to be recognized for his work.

In Washington D.C., McClard was able to hear presentations from high-level officials from the U.S. Department of Education and was congratulated by Secretary of Education Betsy DeVos.

“It was nice that the capital recognized us on that level,” McClard said. “It doesn’t matter what your political views are, it was just interesting to hear what their thoughts were and where they thought education was going.”

The trip also included professional development and networking opportunities, where McClard was able to discuss education with the other distinguished principals.

“It was nice to hear some of their takes, because at the heart of it, they’re all very similar in the sense that we are doing things with the students in mind and we’re always trying to get better,” McClard said. “We always know there’s a better way of doing what we are doing, and we are going to keep working towards it.”

McClard said the big takeaway for him from this experience was that the award doesn’t just reflect his work, but that of North Elementary and the Jackson district.

“That’s been probably the most rewarding part of it – to be able to look at everything that everyone in this building has done,” McClard said.  He added that some of the things that are going on at North are happening in every elementary school in Jackson. “I think that speaks about our district as a whole,” he said.

McClard also said the support he receives doesn’t just come from his amazing coworkers, but also his family. He and Laura have three children – Ainsley, a 12 year old attending Jackson Junior High School; Finn, a 10 year old at North; and Sullivan (Sully), who is three and attends preschool at East Elementary. McClard’s parents, Becky and Rick McClard, and Laura’s parents, Leta and Phil Wagoner, also help out and live in the area.

“I can’t count the amount of times they have picked up the slack at home for me – whether that’s watching the other kids because I’m working late here on some project or going to a meeting or going off to St. Louis for a Connected Learning event,” McClard said.

McClard said he loves Jackson because his family is so close, the quality of the schools and the continued growth in Jackson.

“We are continuing to grow, and there’s opportunities for kids continuing in the area,” McClard said. “In the future, I look forward to seeing what we are going to have next, what it is going to look like and what opportunities we will have for our citizens.”