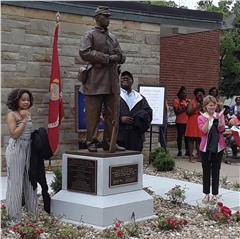 The United States Colored Troops monument dedication on Saturday, June 8, was not only an historic event to complete the legacy of Ivers Square (known as Courthouse Park prior to 2017) but a special community celebration.

The prelude began at 10 a.m. with the Shaffner Family String Band setting the tone with lighthearted music. Men and women strolled about in costumes from the Civil War era, creating a festive air.

Jeannie Gill Hinck, a lifetime Cape Girardeau resident said, “I wouldn’t think of not being here. I think it is wonderful.”

Cape Girardeau resident and medically retired disabled Army veteran Renee Neal said, “What this means to me is what it means to any soldier. Soldiers do not do what they do for recognition, they do it because they are patriots and they believe in the truths this country was built on. In a soldier’s heart there is a loyalty that rings true in the oath they would take over and over no matter what the sacrifice. Every soldier is the true definition of patriotism, no matter what race they are.”

“If only my husband had lived to witness this,” said Helen. “He (Leichavonn Campbell) died at 58. He had searched his roots for years going under the name of Jones.” Helen was in total shock when Denise Lincoln, the instrumental local historian of this project, called to speak with Helen about her husband’s connection to James Ivers.

Ivers was a Cape Girardeau slave who enlisted in the USCT 156 years ago to serve in the Civil War. The site where the monument representing this group of brave men is placed lies directly in front of the Courthouse Annex — once the marketplace for the sale and rental of slaves.

Lincoln said, “James died during the War, but his widow, Harriet, in freedom was able, with the assistance of many (including her former slave owners) to prove her claim for pension, receive it, manage it, and with her earned wages as a washerwoman, accumulated enough to purchase her own city property and raise her minor children there.”

Bowen, was an instrumental individual in the renaming of Ivers Square when he served on City Council and was the department chair of history at Southeast Missouri State University.

When searching for a way to enrich the history of Courthouse Park in 2017, he and Steven Hoffmann, current professor of history at Southeast Missouri State University brainstormed on ideas. Hoffman knew of Lincoln’s research on colored troops. Lincoln suggested a few historic individuals who served in the Civil War from Cape Girardeau and they decided upon Ivers.

Lincoln said, “It turned out since 1806, when the public square was plotted by the city founders, it had no name other than “Courthouse Park.” Because it is the historic site of slave sales and hire-outs and it is the enlistment site when men of color were allowed to enlist in the Union army, Bowen, Hoffman, and I approached the City Council to consider renaming the park in honor and remembrance of this history.”

At the base of the bronze cast six-foot African American Civil War Union soldier a plaque reads, “In Honor of the Men from this Region Who Served in USCT Regiments Union Army—1863-1867 Dedicated to Their Memory-2019.” The bronze statue is one of three; the other monuments are in Helena, AR, and Nashville National Cemetery in Nashville, TN. Complete with details including a canteen, cup, ammunition box and rifle held front and center, the soldier represents the many African American enlisted slaves who fought for the freedoms we now enjoy in the United States.

The monument is a tangible element that enables generations to ask questions, learn the stories and remember the local history of Cape Girardeau and how it is linked to our nation.

In September 2017 Lincoln took a research trip to Freedom Park in Helena, AR. There she encountered the very motivating work of renowned sculptor, Roy W. Butler. It was one of two bronze castings of the African American Civil War Union soldier he created. The third monument at Ivers Square will be the last as the mold has deteriorated and cannot be used again. Lincoln’s visit to Freedom Park set her in motion to try and convince others back home to enhance Ivers Square with a thought-provoking monument to help history speak for itself.

Lincoln said, “Helena was the deployment site for a large number of the men enlisted at Cape Girardeau and I was on a research trip. The statue had a profound effect on me. That physical, public image communicated the historic impact of the enlistment of men of color more profoundly than an article, a book, or a storyboard ever could.”

At a March, 2018 meeting “Denise Lincoln gave a presentation to the Historic Preservation Commission introducing us to the USCT soldier statue by Roy Butler that she had seen in Nashville at the National Cemetery and at Freedom Park in Helena, AR, while she was doing research on the African American men who enlisted in the Union army to fight for their freedom. She was searching for a way to get this statue to Cape Girardeau and welcomed our input. Steve Hoffman and I were very excited about this project and the three of us formed a committee to make it happen. We had meetings with city leaders to share our vision and then worked on presentations to begin fundraising. The donors we approached were equally enthusiastic and generous and it all fell into place. Old Town Cape provided a way for us to collect the funds and pay our expenses. Denise has been very generous with her time educating anyone interested in learning the story,” said Bonnie Kipper, Cape Girardeau HPC member.

Dr. Steven Hoffman, professor of history at Southeast Missouri State University led the opening ceremony on June 8. In a telephone interview he told Features Reporter Christine Pagano that, “The thing that turned me from passive to active supporter was Denise’s presentation at the HPC.” She said that other generations had preserved history with monuments and asked, what are we going to leave?

Hoffman said, “Ours (the Ivers Square monument) will tell a more complete story.” He believes it is a way to tell the story in an authentic way. “Over 240 men defied the status of property. It is remarkable, inspiring.”

Besides Ivers, over 240 men defied their status as property to fight alongside others to keep the United States strong and enjoy the freedoms we have today, despite their status as slaves.

After the unveiling, Cape Mayor Bob Fox accepted the monument as a gift to Cape Girardeau.

“I’m honored. This is a significant addition to our cultural landscape. It emphasizes the desire to tell the whole story. Denise is truly a champion, community historian of the highest caliber,” said Fox.

As Lincoln delivered the history of James Ivers and U.S. Colored Troop enlistees she explained what emotions were on the hearts of individuals as Union troops camped at Cape Girardeau. She described the tension felt by families of colored men as they enlisted to fight. She described the restlessness and despair heightened by the unknown outcome of their bold actions.

A libation ritual administered by Bankole Agbon followed. He talked about how the ancient ritual of pouring water on the monument ground would cool down, soothe and give life back. He talked about the ancient civilization of Africa and how its experience with rivers, art, agriculture, religion and academics contributed to society.

“Culture gives us confidence. History gives us memory,” he said, as he explained that Saturday’s event helped “put a name back up on these people.”

The Turner Brigade then gave a gun salute, music by the Black Light Choral Ensemble was performed and the retrieval of the colors by the Marine Corps League concluded the ceremonies.

Actor portrayals by Marlene Rivero as Harriet Ivers and Marvin-Alonzo Greer as a former USCT soldier and pastor of Cape Girardeau’s St. James AME Church in 1870 were on the agenda.